WASHINGTON — Attorney General Jeff Sessions is directing federal prosecutors to pursue the most serious charges possible against the vast majority of suspects, a reversal of Obama-era policies that is sure to send more people to prison and for much longer terms.

The move has long been expected from Sessions, a former federal prosecutor who cut his teeth during the height of the crack cocaine epidemic and who has promised to make combating violence and drugs the Justice Department’s top priority.

“This policy affirms our responsibility to enforce the law, is moral and just, and produces consistency,” Sessions wrote in a memo to U.S. attorneys made public early Friday.

Advocates quickly criticized the move as a revival of the worst aspects of the drug war, which subjected nonviolent, lower-level offenders to unfairly harsh sentences that disproportionately hurt minority communities.

“It looks like we’re going to fill the prisons back up after finally getting the federal prison population down,” said Kevin Ring, president of Families Against Mandatory Minimums. “But the social and human costs will be much higher.”

The announcement is an unmistakable undoing of Obama administration criminal justice policies that aimed to ease overcrowding in federal prisons and contributed to a national rethinking of how drug criminals were prosecuted and sentenced.

Sessions contends a spike in violence in some big cities and the nation’s opioid epidemic show the need for a return to tougher tactics. He foreshadowed the plan early in his tenure, when he signaled his strong support for the federal government’s continued use of private prisons, reversing another Obama directive to phase out their use.

“We know that drugs and crime go hand-in-hand,” Sessions said in a Friday speech. “Drug trafficking is an inherently violent business. If you want to collect a drug debt, you can’t file a lawsuit in court. You collect it by the barrel of a gun.”

The policy memo says prosecutors should “charge and pursue the most serious, readily provable offense” — something more likely to trigger mandatory minimum sentences. Those rules limit a judge’s discretion and are typically dictated, for example, by the quantity of drugs involved in a crime.

The memo concedes there will be cases in which “good judgment” will warrant a prosecutor veering from that rule. And Sessions said it gives prosecutors “discretion to avoid sentences that would result in an injustice.”

But any exceptions will need to be approved by top supervisors, and the reasons must be documented, allowing the Justice Department to track the handling of such cases by its 94 U.S. attorney’s offices.

And even if they opt not to pursue the most serious charges, prosecutors are still required to provide judges with all the details of a case when defendants are sentenced, which could lengthen prison terms.

The directive rescinds guidance by Sessions’ Democratic predecessor, Eric Holder, who told prosecutors they could in some cases leave drug quantities out of charging documents so as not to charge suspects with crimes that trigger long sentences. Holder’s 2013 initiative, known as “Smart on Crime,” was aimed at encouraging shorter sentences for nonviolent drug offenders and preserving Justice Department resources for more serious and violent criminals. 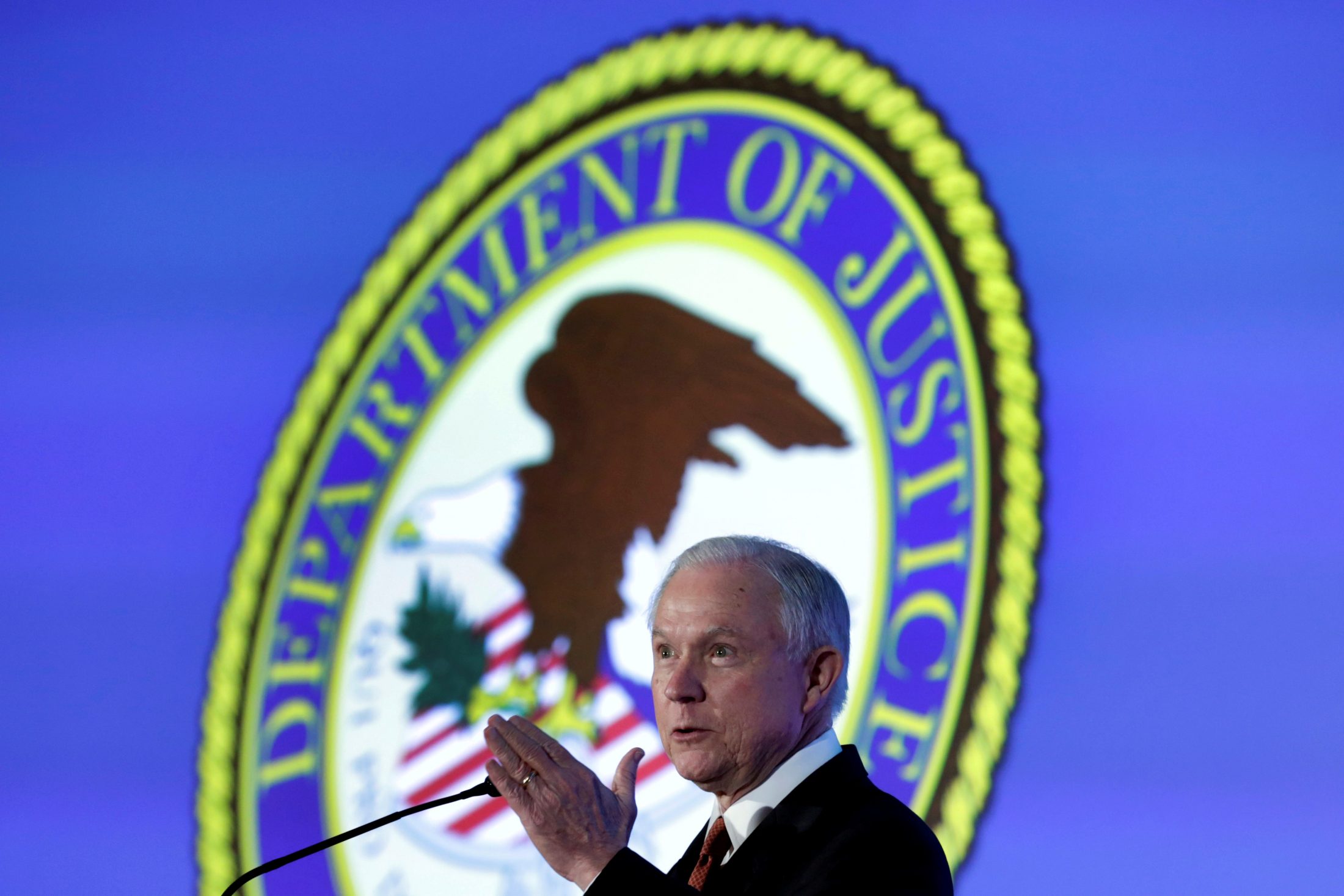 In a statement Friday, Holder called the reversal “dumb on crime,” saying it would be “financially ruinous,” for the department to focus its spending on incarceration rather than preventing and investigating crime.

“It is an ideologically cookie-cutter approach that has only been proven to generate unfairly long sentences that are often applied indiscriminately and do little to achieve long-term public safety,” Holder said.

The Obama policy shift coincided with U.S. Sentencing Commission changes that made tens of thousands of federal drug prisoners eligible for early release, and a clemency initiative that freed convicts deemed deserving of a second chance. Combined, those changes led to a steep decline in a federal prison population that now stands at just under 190,000, down from nearly 220,000 in 2013. Nearly half of those inmates are in custody for drug crimes, records show.

Obama officials cited that decline and a drop in the overall number of drug prosecutions as evidence that policies were working as intended. They argued prosecutors were getting pickier about the cases they were bringing and were seeking mandatory minimum sentences less often.

Still, some prosecutors felt constrained by the Holder directive and expressed concern that they’d lose plea bargaining leverage — and a key inducement for cooperation — without the ability to more freely pursue mandatory minimum sentences.

Sessions argues Holder’s approach sidestepped federal laws that impose such sentences and created inconsistency across the country in the way defendants are punished.

“I trust our prosecutors in the field to make good judgments,” Sessions said. “They deserve to be unhandcuffed and not micro-managed from Washington. Rather, they must be permitted to apply the law to the facts of each investigation.”

Barry Pollack, head of the National Association of Criminal Defense Lawyers, said the new policy “marks a return to the failed policies of past administrations that caused mass incarceration, devastated families and communities, wasted untold millions of dollars and failed to make us any safer.”