WASHINGTON — Speaker Paul Ryan is pushing ahead with votes on rival House GOP immigration bills, but neither appears to have enough support for passage, prompting President Donald Trump to take executive action Wednesday to stem the crisis of family separations at the border.

President Donald Trump has said he’s “1,000 percent” behind both GOP bills, but restive House Republicans have all but begged GOP leaders for more clarity about what the president would actually sign. Public outcry is mounting over the family separations, but so far, there’s no clear roadmap for Thursday voting on the emotional issue dividing Republicans.

More than 2,300 minors were separated from their families at the border from May 5 through June 9, according to the Department of Homeland Security.

With the immigration bills teetering in the House, the White House launched an eleventh-hour push to try to bring Republicans onboard.

A group of wavering lawmakers was sent to the White House to meet with Trump in hopes he can persuade them, confirmed the office of Rep. Steve Scalise, the GOP whip. Back on Capitol Hill, Homeland Security Secretary Kirstjen Nielsen was set to meet with a larger group of House Republicans.

But congressional action remains uncertain. Facing condemnation of the family separations from across the political spectrum, the White House took action.

Trump on Wednesday signed an executive order drafted by Nielsen that directs her department to keep families together after they are detained crossing the border illegally.

“We’re going to have strong, very strong borders, but we’re going to keep the families together,” said Trump, who added he didn’t like the “sight” or “feeling” of children separated from their parents.

More than 2,300 children were separated from their families at the border from May 5 through June 9, according to DHS.

Under the administration’s current policy, all unlawful crossings are referred for prosecution — a process that moves adults to the custody of the U.S. Marshals Service and sends many children to facilities run by the Department of Health and Human Services. Under the Obama administration, such families were usually referred for civil deportation proceedings, not requiring separation.

Ryan told reporters he prefers to see parents and children detained together in custody, as the GOP bills provide.

“We do not want children taken away from their parents,” he said.

As Republicans met privately Wednesday, House Democrats brought about two dozen immigrant children to the chamber floor in an unusual morning protest that defied House rules as they condemned the separation of families at the border.

Democrats said the images of children being held in cages in border facilities, some crying for their parents, would be a moment remembered in U.S. history. Rep. Luis Gutierrez, D-Ill., said Americans were “standing up for children, standing up for those who are in need.”

As Gutierrez spoke, his microphone was cut off because the gathering in the chamber was considered a breach of decorum. Presiding Rep. Liz Cheney, R-Wyo., gaveled the House to order.

GOP lawmakers, increasingly fearful of voter backlash in November, are struggling to find a way out of the problem created by the Trump administration’s policy of putting all immigrants who cross the border in criminal, rather than civil, proceedings that result in family separations.

Many want more clarity from Trump before giving their backing to the broader immigration bills, which also offer different remedies for other provisions on protecting “Dreamer” immigrants from deportation and funding for Trump’s border wall.

HHS Sec Kirstjen Nielsen, who oversees the family separation policy, was shamed out of a Mexican restaurant by protestors tonight.pic.twitter.com/rHMgdVtZ10

“Some of the members wanted to make sure the president is very visible in his support for both bills,” said Rep. Mark Walker, R-N.C., the chairman of the conservative Republican Study Committee, which makes up more than half the GOP majority.

Walker said several lawmakers remained undecided, denying leadership of the majority needed for passage. They want to see Trump’s support “constantly as we move forward — that he’s out there vocally supporting what he believes is the best pathway forward,” Walker said.

Even if Republicans manage to pass one of the immigration bills through the House, it is all but certain to fizzle in the Senate, where Republicans are rallying behind a different approach.

Even if Republicans manage to pass one of the immigration bills through the House, it is all but certain to fizzle in the Senate, where Republicans are rallying behind a different approach.

Theirs is narrow legislation proposed by Sen. Ted Cruz, R-Texas, and others that would allow detained families to stay together in custody while expediting their hearings and possible deportation proceedings.

Under the bill, children under age 18 would be kept with their families in residential centers during legal proceedings. Facilities would have to be “secure and safe.” Children would be separated from adults who are not their parent or who have serious criminal records, or if there is evidence of abuse or trafficking. 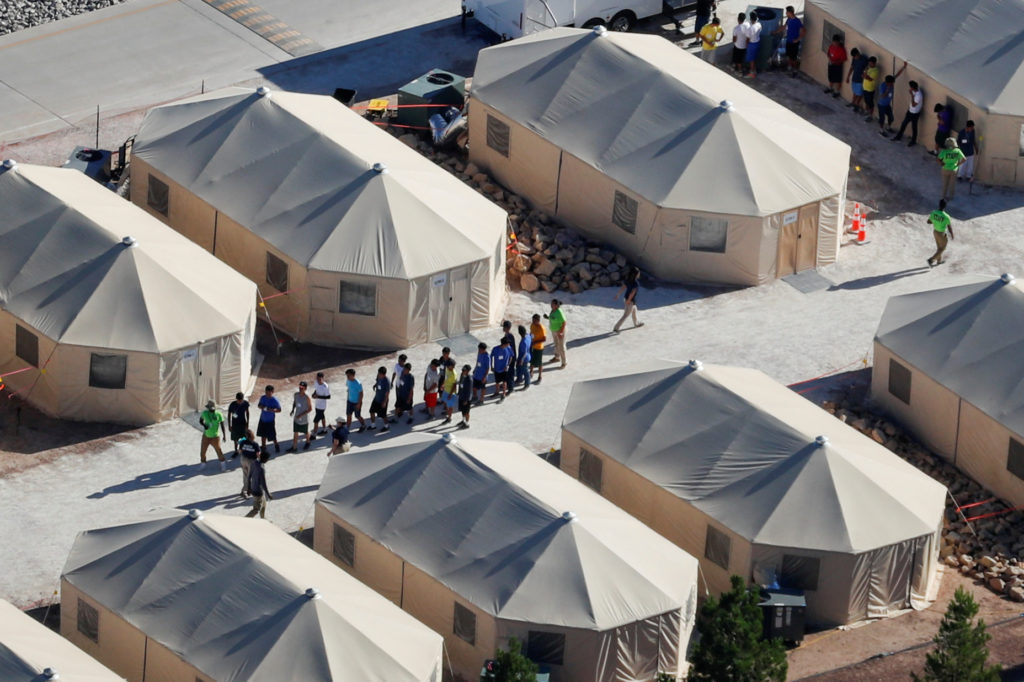 Immigrant children now housed in a tent encampment under the new “zero tolerance” policy by the Trump administration are shown walking in single file at the facility near the Mexican border in Tornillo, Texas, on June 19, 2018. Photo by Mike Blake/Reuters

The government would prioritize processing such families and add 1,000 beds and 225 immigration judges.

“The question is, Do congressional Democrats want to actually solve the problem or do they want an issue to campaign on in November?” Cruz said.

Senate Democrats have rallied behind a bill from Sen. Dianne Feinstein, D-Calif., that would prohibit migrant families from being separated.

READ NEXT: Erosion of immigrant protections began with Trump inaugural