WASHINGTON — A Navy SEAL who helped rescue an American hostage in Afghanistan received the nation’s highest military honor Monday, hailed by President Barack Obama as “a special breed of warrior who so often serves in the shadows.”

Obama said during a ceremony at the White House that Byers is the “consummate, quiet professional” who would rather be elsewhere, perhaps holding his breath under dark, frigid water.

And while many details of Byers’ work remain classified, and many of his teammates cannot be mentioned, Obama said the event provided the chance to pay tribute to special operations members of the military who have borne an extraordinarily heavy load during the fighting in the Middle East.

Byers participated in the 2012 rescue of Dr. Dilip Joseph, who was abducted along with his driver and an Afghan interpreter. The rescue was undertaken three days later by members of the Navy’s famed SEAL Team 6. The unit is best known for undertaking the mission that killed Osama bin Laden.

“Whenever Americans are taken hostage in the world, we move heaven and earth to bring them home safe,” Obama said. “We send some thunder and some lightning.”

The rescue took place at night and after an arduous four-hour hike in the mountains of eastern Afghanistan. Obama recounted during the ceremony how the SEALs rushed the building where the doctor was held. Byers ripped down a layer of blankets covering the entrance, exposing himself to enemy fire. A teammate pushed in and was shot. Byers moved in next and fired at an enemy guard, and then fought with another.

Hearing English, Byers moved off of the guard and threw himself on the hostage, using his body to shield Joseph from the bullets, Obama said. Another enemy fighter appeared, and with his bare hands, Byers pinned the fighter to the wall and held him until his teammates took action.

“It was over almost as soon as it began. In just minutes, by going after those guards, Ed saved the lives of several teammates, and that hostage,” Obama said. 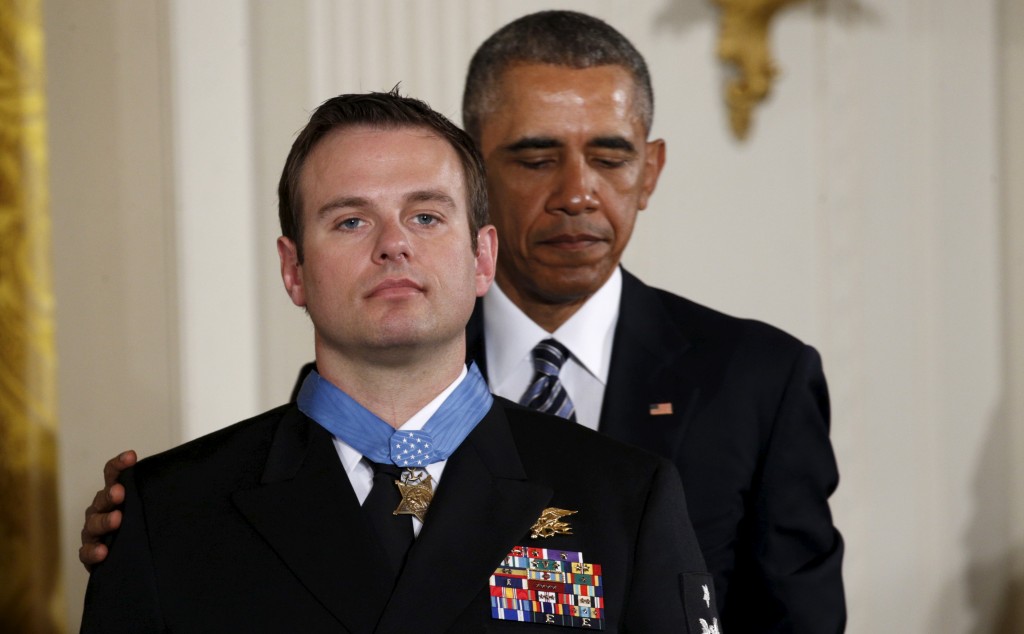 President Barack Obama (R) puts his hand on the shoulder of U.S. Navy Senior Chief Special Warfare Operator Edward Byers after awarding him the Medal of Honor during a ceremony at the White House. Byers was honored for his courageous actions while serving as part of a team that rescued an American civilian being held hostage in Afghanistan on December 8-9, 2012. Photo by Kevin Lamarque/Reuters

Once the doctor was moved to a helicopter landing zone, Byers, a certified paramedic, assisted in providing medical aid to his colleague, who died of his wounds. That SEAL was Petty Officer 1st Class Nicolas D. Checque, 28, of Monroeville, Pennsylvania. Obama also honored Checque’s service during Monday’s ceremony, noting that he is among 55 SEALs to make the ultimate sacrifice since the September 11 terrorist attacks, and that he was awarded the Navy Cross.

“He was an American hero, and he was the hero of that operation,” Byers told reporters in a statement that he read moments after the ceremony. “He died a warrior. He died to bring back another American.”

A Navy bio said Byers grew up in Grand Rapids, Ohio, and graduated in 1997, from Otsego High School. He is married and has one daughter.

Byers has deployed overseas 11 times with nine combat tours. He was promoted to the rank of senior chief petty officer in January 2016. He is the sixth Navy SEAL in history to receive the Medal of Honor.

Byers said he’s unsure how receiving the Medal of Honor will change his life, but he plans to keep doing what he’s doing.

“It’s truly the best job in the world, and I love the people I’m around,” Byers said. “I admire them very much.”