What to watch for in the second debate:

Polls have started breaking decisively in Hillary Clinton’s direction since the first presidential debate. She doesn’t have an insurmountable lead. But Donald Trump needs to make up ground fast, and he’s running out of time. Early voting is already underway in several states, including Iowa and Illinois. Election Day is now less than five weeks away.

The Trump team is hoping to turn things around at the second presidential debate on Sunday in St. Louis. The town hall-style debate comes on the heels of a solid showing by Trump’s running mate, Indiana Gov. Mike Pence, at the vice-presidential debate last Tuesday in Virginia. Judging from past White House races, however, it’s unlikely that Trump will get a big enough boost from the debate to close Clinton’s three to five-point lead in the polls. But it’s possible. Trump has defied expectations so far. He’ll be under tremendous pressure on Sunday — but so will Clinton, who is hoping to repeat her commanding performance at the Hofstra University debate on Sept. 26.

Hurricane Matthew could also impact the debate. Both Trump and Clinton suspended campaign ads in Florida before the hurricane hit the mainland U.S. The extent of the damage won’t be clear for several days. But if the storm causes widespread flooding and other damage, round-the-clock coverage of Hurricane Matthew could divert attention away from the debate and presidential race. Superstorm Sandy had a similar effect in the last month of the 2012 election.

With this in mind, here is our guide to the second presidential debate.

Up close and personal

The town hall-style debate on Sunday involves a different set of skills than the first debate last month. Clinton and Trump will speak directly with voters, forcing them to answer questions that they might not have had a chance to prepare for in advance. In addition, they’ll be free to move around the stage, which puts an even greater emphasis on body language and presentation.

The town hall format has produced some of the most damaging debate moments in the past.
Trump supporters have argued that the more intimate format gives the Republican nominee an advantage. Trump is an accomplished entertainer who has years of experience interacting with everyday Americans on live television. He’s at his best when he plays to the crowd, which is one reason why he struggled mightily at the first debate, where the audience was required to remain silent while Trump and Clinton argued with each other behind formal podiums. On Sunday, Trump will have an opportunity to show off his interpersonal skills.

But there is a danger for Trump, here, too: the town hall format is the least scripted of the three presidential debates. The last thing Trump needs now, as he struggles to stay on message in the final weeks of the race, is to make another off-the-cuff remark — on, say, his taxes or women — that could dominate the news cycle and take attention away from his message. Clinton could also run into difficulties if she mishandles an audience question on a controversial issue like her private email server or the Benghazi scandal.

It will also be interesting to see how the candidates make use of their freedom on stage. The town hall format has produced some of the most damaging debate moments in the past. In 2008, John McCain awkwardly wandered around the stage; in 1992, George H.W. Bush looked down at his watch. On the other hand, town hall debates can also elicit genuine interactions between voters and a candidate. In that same 1992 debate, Bill Clinton walked to the edge of the stage and gave a memorable answer about the economy that resonated with the audience and viewers at home. On Sunday, the winner of the debate could be the candidate with the best stage presence.

In the first debate, Clinton attacked Trump for not releasing his tax returns. Now she has more material, thanks to a New York Times story, which came out days later, that found Trump reported a $916 million tax loss in 1995 — and potentially didn’t pay any federal income tax for the next 18 years.

Trump did a poor job of explaining himself when the issue came up in the first debate. He said he would release his returns when the IRS completes an audit of his taxes. But Clinton (as well as the moderator, Lester Holt), noted that there is no rule blocking candidates under audit from releasing their returns. At two other points in the debate, Trump seemed to admit that he didn’t pay federal income taxes in recent years, though he later said he has.

Pence offered a better defense in the vice-presidential debate. But the issue hasn’t gone away. Polls in the last week show that a majority of Americans think wealthy people should pay their fair share in taxes. A voter will likely question Trump on taxes at the second presidential debate, (and if a voter doesn’t, Clinton will raise the issue.) Trump needs to have a convincing answer ready. But what he says may matter less than how quickly he can pivot away from the issue. The more time Trump spends defending his refusal to release his tax returns, the worse off he’ll be. 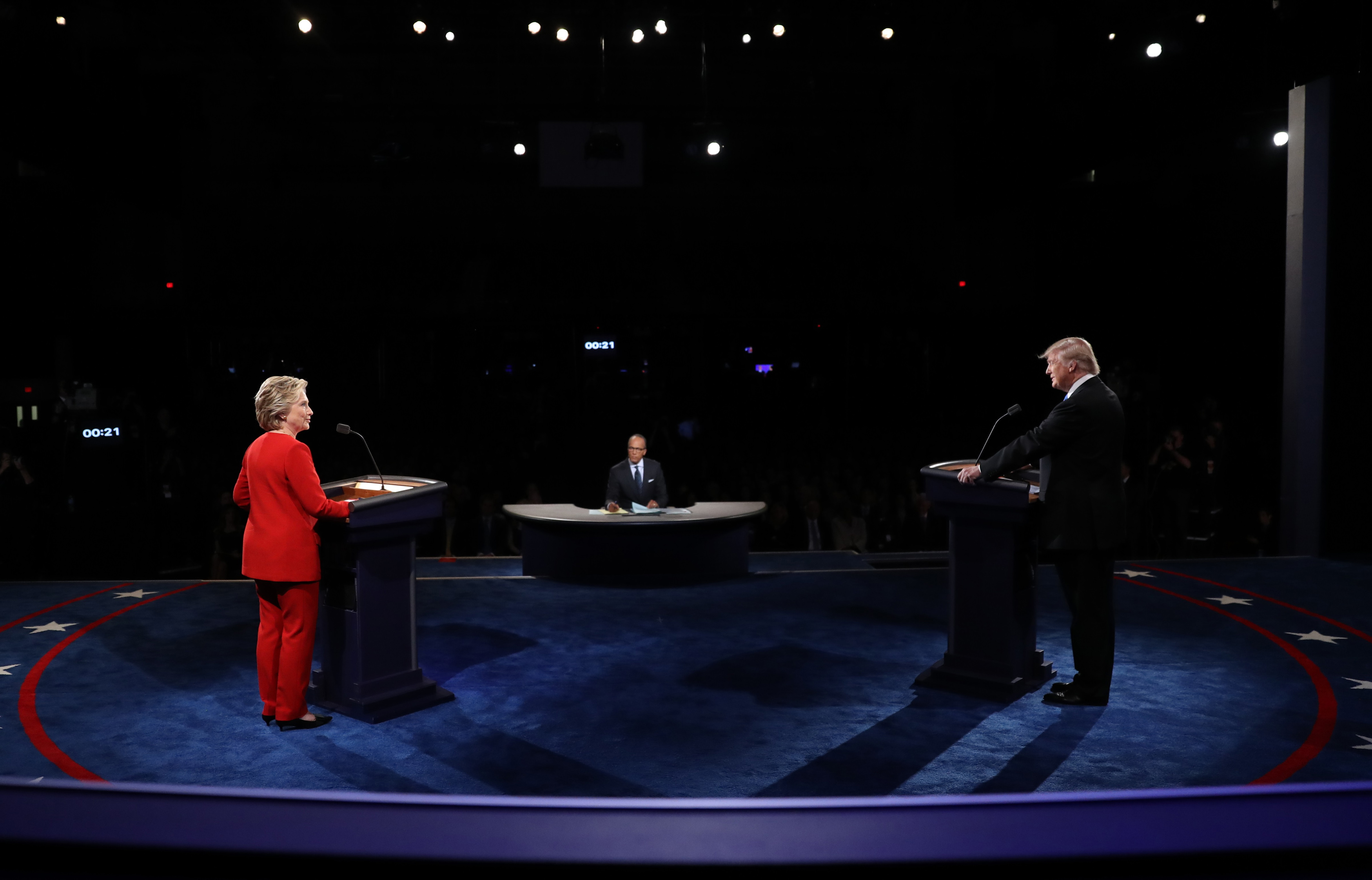 Hillary Clinton raised the issue of Donald Trump’s tax returns at the first debate on Sept. 26. The issue will likely come up again at the second debate. Photo by Joe Raedle/REUTERS

Clinton is making a big final push to win over disgruntled millennials. Her campaign suffered a setback on that front last week, when a recording surfaced of Clinton making disparaging remarks about young people who supported Vermont Senator Bernie Sanders, her rival in the Democratic primaries. Sanders threw Clinton a lifeline by downplaying the comments. He has also ramped up his campaign schedule, and is now making several appearances a day on Clinton’s behalf.

Sanders’ support could make a difference. Chelsea Clinton and Michelle Obama have also hit the campaign trail to drum up support among millennial and minority voters. But the surrogates matter less than the candidate. At the debate on Sunday, Clinton will have another prime-time chance to get millennials excited about her campaign. If she gets a question from a young person, it could be one of the most important moments of the night for her campaign.

In that moment, Clinton will need to strike the right balance between offering policy specifics and a broader vision about the future of the country. A generalized, uplifting response could bring young people on board. A wonky answer won’t work nearly as well.

At this point in the race, many voters are sick of the mudslinging between the Clinton and Trump campaigns. The candidates will have two choices on Sunday: to talk about their plans to improve the nation’s economy and tackle other issues, or to criticize each other’s personal lives.

The end result will likely be an unsatisfying combination of the two. Trump has said he might talk about the Clintons’ marriage at the second debate, a strategy many Republicans fear could backfire. That type of attack could alienate female voters, a group that Trump needs to do better with in order to win the presidency. And if Trump goes after Clinton on her husband’s infidelities, he could expose himself to criticism about his own marital history.

On the other side, Clinton, armed with the new information about Trump’s taxes, could continue to hammer his business career — even though many Democratic insiders are hoping that she pivots to a sunnier message in the closing weeks of the campaign. The way she opens the debate will provide a clue about her strategy for the rest of the debate. If Clinton comes out swinging against Trump, it could turn into an ugly night.

Will the debate make a difference?

The vast majority of voters have already made up their minds in the presidential election. Past elections show that debates — especially second and third debates — rarely have a significant impact on the final outcome of the race. This does not bode well for Trump. Nor does the fact that viewership typically drops off after the first debate. Trump may perform better this time around, but it will likely come before a smaller television audience.

This isn’t to say that the debate is meaningless. President Obama lost the first presidential debate in 2012 to Mitt Romney, but rebounded with a stronger performance in the town hall event. Trump needs a great night — or a terrible night from Clinton. Whatever happens, it’s unclear how much the debate will move the polls. Voters’ views of these two candidates are largely baked in. Barring something unusual, the underlying dynamics of the race will stay the same.