In recent weeks, when President Donald Trump has made the argument that “walls work,” he has pointed to El Paso, Texas, as a border wall success story.

Trump cited the West Texas city in his State of the Union speech last week, when he spent a large portion of the address reiterating his administration’s talking points around immigration. A barrier was built in El Paso nearly 10 years ago, and the introduction of that barrier, Trump said, allowed El Paso to undergo a profound transformation from a dangerous border city.

“Now, with a powerful barrier in place, El Paso is one of our safest cities,” he said in the speech. “Simply put, walls work, and walls save lives.” Weeks earlier, Trump said the change happened “overnight.”

But several El Paso residents and experts have pushed back on the president’s characterization of their city, saying it misconstrues what happened before and after parts of the border wall were erected under former President George W. Bush. (The facts run counter to Trump’s words about El Paso.)

El Paso County lawmakers passed a resolution ahead of Trump’s visit, saying the city’s residents are “disillusioned by [the president’s] lies regarding the border and our community.” Officials cited frustration over Trump’s past statements about the border and about Monday’s campaign rally, “where it is possible that false statements about El Paso will continue to be made.”

El Paso County passes a resolution saying it is “disillusioned by President Trump’s lies regarding the border and our community,” citing past false statements and the likelihood of new ones at rally tonight. pic.twitter.com/cjtXEkyTOS

Monday night, opponents are holding an anti-wall march in El Paso will to coincide with Trump’s visit. The rally is being led by former Democratic congressman Beto O’Rourke, who represented the area until stepping down from Congress earlier this year and is reportedly weighing a 2020 White House bid. 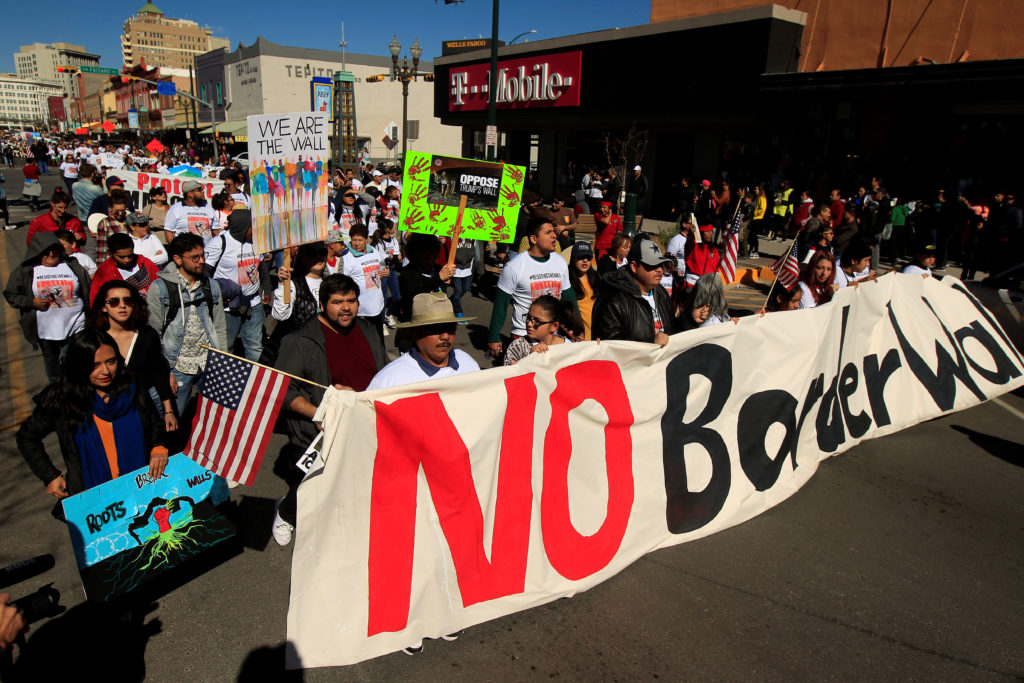 The 57 miles of border fencing in El Paso was constructed a few years after Bush signed the Border Fence Act in 2006.

In January, Republican Texas Attorney General Ken Paxton told Trump during a border security roundtable that the border wall worked in El Paso. As proof, he cited the noticeable drop in crime after the barrier was built.

“We’ve tested it in Texas,” he told the president.

But as the El Paso Times pointed out, the crime data has not backed this up.

After Trump’s remarks about El Paso in his State of the Union address, Mayor Dee Margo, a Republican, took to Twitter to counter the president’s claims, saying that “El Paso was NEVER one of the MOST dangerous cities in the US.”

El Paso was NEVER one of the MOST dangerous cities in the US. We‘ve had a fence for 10 years and it has impacted illegal immigration and curbed criminal activity. It is NOT the sole deterrent. Law enforcement in our community continues to keep us safe #SOTU

“We‘ve had a fence for 10 years and it has impacted illegal immigration and curbed criminal activity. It is NOT the sole deterrent. Law enforcement in our community continues to keep us safe,” Margo added.

Rep. Veronica Escobar, D-Texas, also tweeted that Trump was “lying” and used his State of the Union address “to spread falsehoods about our beloved city of El Paso.”

For hundreds of thousands of U.S. asylum seekers, a ‘life in limbo’