WASHINGTON — President Donald Trump’s long-awaited plan to bring down drug prices, unveiled Friday, will mostly spare the pharmaceutical industry he previously accused of “getting away with murder” and instead focus on increasing private competition and requiring more openness about costs.

In Rose Garden remarks at the White House, Trump called his plan the “most sweeping action in history to lower the price of prescription drugs for the American people.” But it does not include his campaign pledge to use the massive buying power of the government’s Medicare program to directly negotiate lower prices for seniors.

That idea has long been supported by Democrats but is a non-starter for drugmakers and most Republicans in Congress.

The administration will pursue a raft of old and new measures intended to improve competition and transparency in the notoriously complex drug pricing system.

Instead, the administration will pursue a raft of old and new measures intended to improve competition and transparency in the notoriously complex drug pricing system. Those include a proposal requiring drugmakers to disclose the cost of their medicines in their television advertisements. Health Secretary Alex Azar said the Food and Drug Administration would immediately examine requiring that information in TV ads.

The proposals also include banning the pharmacist “gag rule,” which Trump said prevents druggists from telling customers about lower-cost options so they can save money, and speeding up the approval process for over-the-counter medications so patients can buy more drugs without prescriptions.

It’s an approach that avoids a direct confrontation with the powerful pharmaceutical lobby, but it could also underwhelm Americans seeking relief from escalating prescription costs. 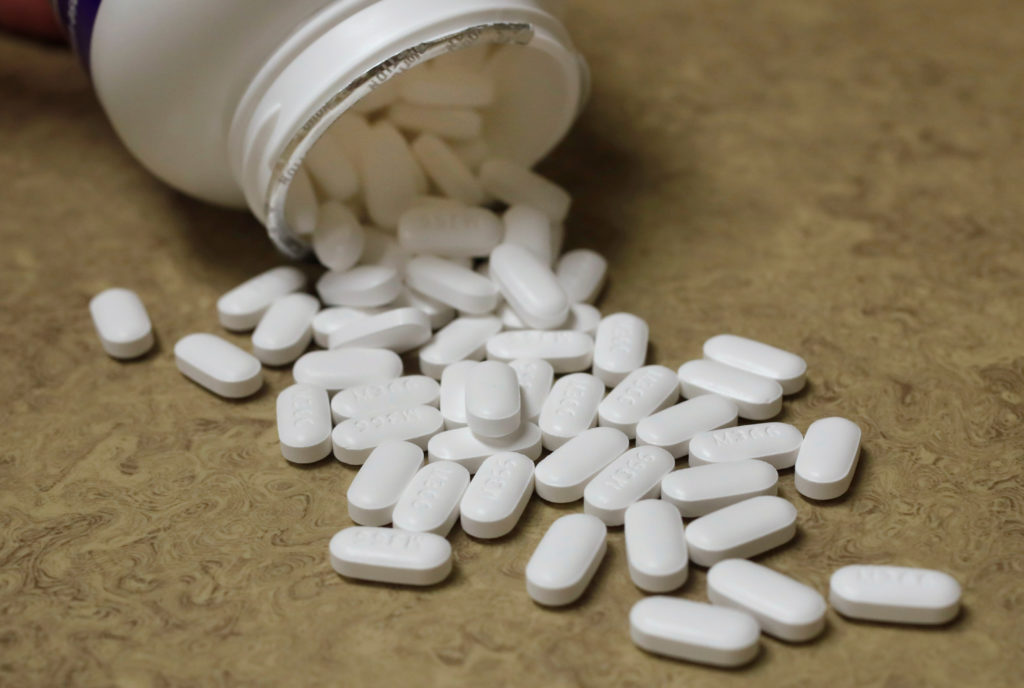 The president will deliver his first speech on a plan to lower drug prices. Photo by George Frey/Reuters

Perhaps the most threatening idea under consideration is to give the private health insurers who run Medicare plans more negotiating power with drugmakers. But administration officials offered few specifics on how that might work.

“Consumers are ultimately going to be the judge of this announcement,” said Dan Mendelson, a health care consultant. “If they don’t address the cost that patients see at the pharmacy counter it’s not going to be seen as responsive.”

A majority of Americans say passing laws to bring down prescription drug prices should be a “top priority” for Trump and Congress, according to recent polling by the Kaiser Family Foundation.

As a candidate, Trump railed against the pharmaceutical industry. But as president he has shied away from major reforms and staffed his administration with appointees who have deep ties to the industry. That includes Azar, a former top executive at Eli Lilly.

Azar and other Trump officials have described the pricing problem in stark terms and promised bold action.

“Every incentive is toward higher list prices because everyone in the system gets a cut off that list price except the patient,” said Azar, speaking on “Fox and Friends” on Friday morning.

He said one new proposal would allow senior citizens enrolled in Medicare who hit the catastrophic period to pay nothing out of pocket, “so really relieve a huge burden on our senior citizens.”

Parts of the plan were previously released in the president’s budget proposal and would require action by Congress. Those steps include: requiring insurers to share rebates from drug companies with Medicare patients and changing the way Medicare pays for high-priced drugs administered at doctors’ offices.

Trump staffers said the new steps coming Friday could be taken immediately without action by lawmakers, who are mainly focused on November elections. The measures aim to increase competition, create incentives for drugmakers to lower initial prices and stop foreign governments from “freeloading” off U.S. pharmaceutical research. But the officials gave few specifics.

Public outrage over drug costs has been growing for years as Americans face pricing pressure from multiple sources: New medicines for life-threatening diseases often launch with prices exceeding $100,000 per year. And older drugs for common ailments like diabetes and asthma routinely see price hikes around 10 percent annually. Meanwhile Americans are paying more at the pharmacy counter due to health insurance plans that require them to shoulder more of their prescription costs.

Trump officials have hinted for weeks that the plan, in part, will untangle the convoluted system of discounts and rebates between drugmakers and insurers, pharmacy benefit managers and other health care middlemen. FDA Commissioner Scott Gottlieb — another Trump official with industry ties — says this lack of transparency creates perverse incentives in which drugmakers and other health care companies all benefit from rising prices.

“Right now, we don’t have a truly free market when it comes to drug pricing, and in too many cases, that’s driving prices to unaffordable levels for some patients.”

“Right now, we don’t have a truly free market when it comes to drug pricing, and in too many cases, that’s driving prices to unaffordable levels for some patients,” Gottlieb said in a speech last week.

Experts who study drug pricing are encouraged that the discussion has moved on from outrage to more sophisticated proposals.

“This is progress and I think there’s no question that opening up the machine to make it more clear how it works will lead to change — hopefully to constructive change,” said Dr. Peter Bach, director of Memorial Sloan Kettering’s Center for Health Policy and Outcomes.

But others warn there is no guarantee that unraveling the current pricing-setting bureaucracy will lead to lower prices, because it all starts with drugmakers’ initial prices.

Drugmakers generally can charge as much as the market will bear because the U.S. government doesn’t regulate medicine prices, unlike most other countries.

The result, in part, is the highest drug prices in the world.

The U.S. spent $1,162 per person on prescription drugs in 2015, according to the Organization for Economic Cooperation and Development. That’s more than twice the $497 per person spent in the United Kingdom, which has a nationalized health care system.

Medicare is the largest purchaser of prescription drugs in the nation, covering 60 million seniors and Americans with disabilities, but it is barred by law from directly negotiating lower prices with drugmakers. Democrats have long favored giving Medicare that power, but Republicans traditionally oppose the idea.

Allowing Medicare to negotiate prices is unacceptable to the powerful drug lobby, which has spent tens of millions of dollars since Trump’s inauguration to influence the Washington conversation around drug prices, including a high-profile TV advertising campaign portraying its scientists as medical trailblazers.

How will the pharmaceutical industry evolve on drug pricing?