Update: 11:06 p.m. ET – The full text of the Republican response, as provided, is pasted below this article and the full speech video is available above.

WASHINGTON — The new Republican Congress understands Americans’ suffering from the economy, health care system and Washington gridlock and will steer the country away from President Barack Obama’s failed policies, the newly minted senator delivering her party’s official response to the State of Union address promised Tuesday.

Mixing calls for bipartisanship with a flexing of GOP muscle, freshman Sen. Joni Ernst, R-Iowa, called on Obama to cooperate with Republicans to simplify the tax code by lowering rates and eliminating unspecified loopholes and to ease trade barriers with Europe and Asia. She also listed a parade of looming clashes with the president, including GOP efforts to force construction of the Keystone XL oil pipeline, balance the budget without raising taxes and restrict abortions.

“Americans have been hurting, but when we demanded solutions, too often Washington responded with the same stale mindset that led to failed policies like Obamacare,” Ernst said, referring to the Obama health care overhaul that Republicans loathe. “It’s a mindset that gave us political talking points, not serious solutions.”

Ernst’s speech marked her party’s first State of the Union response under Obama in which the GOP has held House and Senate majorities. It came as Republicans hope to expand their appeal among women and minorities ahead of the 2016 presidential and congressional elections.

“We heard the message you sent in November, loud and clear,” she said in remarks lasting 9½ minutes and delivered mostly with a smile. “And now we’re getting to work to change the direction Washington has been taking our country.”

Ernst, 44, sprinkled her policy prescriptions with a personal touch, recounting her youth on her family’s farm in Red Oak, Iowa. She described plowing fields, working mornings at a Hardees restaurant and wearing plastic bread bags over her only pair of good shoes on rainy school days.

Tuesday’s speeches came as the economy has been adding juice, with economic growth accelerating and unemployment falling. In his remarks, Obama said it was time to “turn the page” on years of war and economic weakness and turn to investments to strengthen the country. 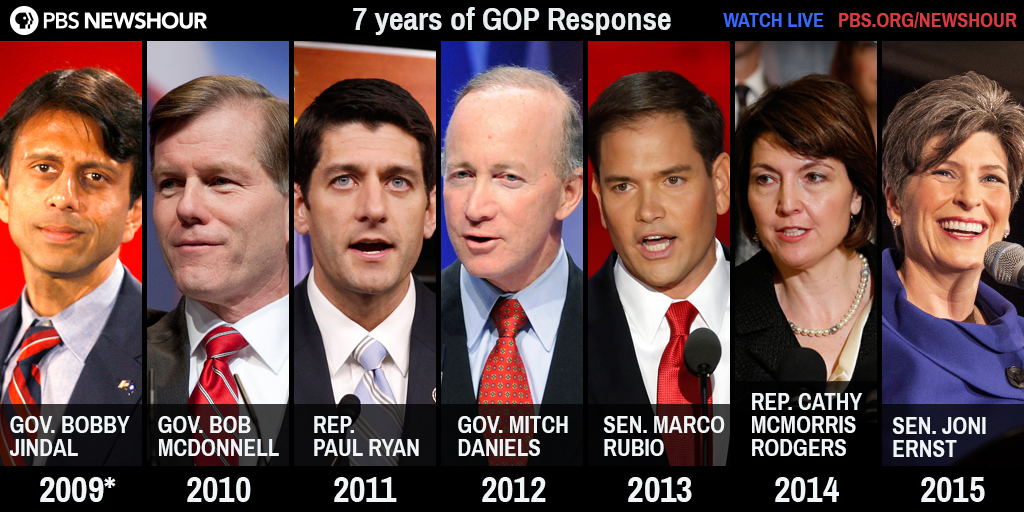 Ernst, a fresh face on the national political scene, has been in the Senate for all of two weeks. Her November election victory helped give Republicans control of the Senate for the first time in eight years.

The conservative Ernst rocketed to prominence in Republican circles last year, when the little-known state senator and Iraq war veteran won the GOP primary and captured a Senate seat that retiring Democrat Tom Harkin had held for three decades.

Ernst gained attention for a campaign ad in which she spoke of her farm experience castrating pigs and vowed to use that attitude against Washington’s big spenders, saying, “Let’s make them squeal.” She has advocated the abolition of the IRS and Environmental Protection Agency, backed a state law supporting personhood for fetuses and spoken of using her gun to defend herself against any government attempts to restrict her rights.

Tuesday, Ernst cited the GOP’s dispute with Obama over forcing construction of the proposed Keystone pipeline from Canada to the Gulf Coast. With some Democratic support, Republicans call the project a job creator while the White House has threatened a veto over potential environmental damage.

“President Obama will soon have a decision to make: Will he sign the bill or block good American jobs?” she said.

Ernst also said “our hearts go out” to victims of terrorism in France and elsewhere, and called on Obama to craft a comprehensive anti-terrorism plan without suggesting specifics.

While Obama spoke, the office of House Speaker John Boehner, R-Ohio, pushed out more than a dozen emails critiquing his remarks. Using the acronyn for “State of the Union,” the emails carried headlines such as “SOTU FACT: Obamacare Is Slashing Hours & Wages, & Destroying Jobs.”

The full text of the speech, as provided, is reprinted below:

WASHINGTON, DC — Following is the full text of the Republican Address to the Nation by Sen. Joni Ernst (R-IA), as prepared for delivery:

“I’m Joni Ernst. As a mother, a soldier, and a newly elected senator from the great State of Iowa, I am proud to speak with you tonight.

“A few moments ago, we heard the President lay out his vision for the year to come. Even if we may not always agree, it’s important to hear different points of view in this great country. We appreciate the President sharing his.

“Tonight though, rather than respond to a speech, I’d like to talk about your priorities. I’d like to have a conversation about the new Republican Congress you just elected, and how we plan to make Washington focus on your concerns again.

“We heard the message you sent in November — loud and clear. And now we’re getting to work to change the direction Washington has been taking our country.

“The new Republican Congress also understands how difficult these past six years have been. For many of us, the sting of the economy and the frustration with Washington’s dysfunction weren’t things we had to read about. We felt them every day.

“We felt them in Red Oak — the little town in southwestern Iowa where I grew up, and am still proud to call home today.

“As a young girl, I plowed the fields of our family farm. I worked construction with my dad. To save for college, I worked the morning biscuit line at Hardees.

“We were raised to live simply, not to waste. It was a lesson my mother taught me every rainy morning.

“You see, growing up, I had only one good pair of shoes. So on rainy school days, my mom would slip plastic bread bags over them to keep them dry.

“But I was never embarrassed. Because the school bus would be filled with rows and rows of young Iowans with bread bags slipped over their feet.

“Our parents may not have had much, but they worked hard for what they did have.

“These days though, many families feel like they’re working harder and harder, with less and less to show for it.

“Not just in Red Oak, but across the country.

“We see our neighbors agonize over stagnant wages and lost jobs. We see the hurt caused by canceled healthcare plans and higher monthly insurance bills. We see too many moms and dads put their own dreams on hold while growing more fearful about the kind of future they’ll be able to leave to their children.

“Americans have been hurting, but when we demanded solutions, too often Washington responded with the same stale mindset that led to failed policies like Obamacare. It’s a mindset that gave us political talking points, not serious solutions.

“That’s why the new Republican majority you elected started by reforming Congress to make it function again. And now, we’re working hard to pass the kind of serious job-creation ideas you deserve.

“One you’ve probably heard about is the Keystone jobs bill. President Obama has been delaying this bipartisan infrastructure project for years, even though many members of his party, unions, and a strong majority of Americans support it. The President’s own State Department has said Keystone’s construction could support thousands of jobs and pump billions into our economy, and do it with minimal environmental impact.

“We worked with Democrats to pass this bill through the House. We’re doing the same now in the Senate.

“President Obama will soon have a decision to make: will he sign the bill, or block good American jobs?

“There’s a lot we can achieve if we work together.

“Let’s tear down trade barriers in places like Europe and the Pacific. Let’s sell more of what we make and grow in America over there so we can boost manufacturing, wages, and jobs right here, at home.

“Let’s simplify America’s outdated and loophole-ridden tax code. Republicans think tax filing should be easier for you, not just the well-connected. So let’s iron out loopholes to lower rates — and create jobs, not pay for more government spending.

“The President has already expressed some support for these kinds of ideas. We’re calling on him now to cooperate to pass them.

“You’ll see a lot of serious work in this new Congress.

“Some of it will occur where I stand tonight, in the Armed Services Committee room. This is where I’ll join committee colleagues — Republicans and Democrats — to discuss ways to support our exceptional military and its mission. This is where we’ll debate strategies to confront terrorism and the threats posed by Al Qaeda, ISIL, and those radicalized by them.

“We know threats like these can’t just be wished away. We’ve been reminded of terrorism’s reach both at home and abroad; most recently in France and Nigeria, but also in places like Canada and Australia. Our hearts go out to all the innocent victims of terrorism and their loved ones. We can only imagine the depth of their grief.

“For two decades, I’ve proudly worn our nation’s uniform: today, as a Lt. Colonel in the Iowa Army National Guard. While deployed overseas with some of America’s finest men and women, I’ve seen just how dangerous these kinds of threats can be.

“The forces of violence and oppression don’t care about the innocent. We need a comprehensive plan to defeat them.

“We must also honor America’s veterans. These men and women have sacrificed so much in defense of our freedoms, and our way of life. They deserve nothing less than the benefits they were promised and a quality of care we can be all be proud of.

“These are important issues the new Congress plans to address.

“We’ll propose ideas that aim to cut wasteful spending and balance the budget — with meaningful reforms, not higher taxes like the President has proposed.

“And we’ll defend life, because protecting our most vulnerable is an important measure of any society.

“Congress is back to work on your behalf, ready to make Washington focus on your concerns again.

“We know America faces big challenges. But history has shown there’s nothing our nation, and our people, can’t accomplish.

“Just look at my parents and grandparents.

“They had very little to call their own except the sweat on their brow and the dirt on their hands. But they worked, they sacrificed, and they dreamed big dreams for their children and grandchildren.

“And because they did, an ordinary Iowan like me has had some truly extraordinary opportunities — because they showed me that you don’t need to come from wealth or privilege to make a difference. You just need the freedom to dream big, and a whole lot of hard work.

“The new Republican Congress you elected is working to make Washington understand that too. And with a little cooperation from the President, we can get Washington working again.

“Thank you for allowing me to speak with you tonight.

“May God bless this great country of ours, the brave Americans serving in uniform on our behalf, and you, the hardworking men and women who make the United States of America the greatest nation the world has ever known.”