During Watergate, it was country first, party second. What about now?

For most politicians, comparisons to Watergate are a sure sign of trouble. But President Donald Trump, as he has often reminded the American public, is not your average politician.

Mr. Trump put that claim to the test this month by firing the director of the FBI. The move drew immediate comparisons to Richard Nixon’s dismissal of Archibald Cox, the special prosecutor investigating his presidency, after an extraordinary turn of events known in Washington shorthand as the “Saturday Night Massacre.”

James Comey’s firing and the whiplash pace of developments since then, including the appointment of a special counsel last week, bears some resemblance to Watergate. But it’s still too soon to tell how much the scandals have in common.

At this early stage, the differences between the Nixon and Trump eras stand out more than the similarities. The Comey firing and Russia investigations form a case study of the massive shifts in U.S. politics and media since the early 1970s.

The biggest change has to do with political polarization. The country is much more divided than it was four decades ago, and this fact will play a key role in determining how Trump’s current crisis plays out. In the end, the political division that Trump fomented as a candidate could help save his presidency.

Partisanship will shape the debate in two separate arenas: on Capitol Hill, and in the court of public opinion.

When the Watergate break-in took place, Republicans held the White House, and Democrats were in control of Congress. As a result, Nixon’s party was powerless to stop Democrats from initiating impeachment proceedings. Republicans also had less incentive to protect the president at all costs.

At the time, Republicans had a smaller “stake in keeping Nixon at the helm in order to pursue their policy agenda,” said Robert Shapiro, a political science professor at Columbia University.

The Comey firing and Russia investigations form a case study of the massive shifts in U.S. politics and media since the early 1970s.

“Now, Republican leaders in Congress have a huge incentive to stick by Trump because they have a legislative agenda to push through,” Shapiro said. “And they’re willing to ignore all else to see that happen.”

Republicans could potentially survive this crisis with their majority in Congress intact. They would retain their hold on the White House as well, if Trump resigned or was impeached for obstruction of justice or another charge in connection to the congressional and special counsel investigations into potential collusion between Russia and his 2016 campaign.

But a real fight over Trump’s hold on power would bring legislative activity in Congress to a halt. And while some Republicans would welcome the chance to install Vice President Mike Pence in the Oval Office, the process of replacing Trump would exact a heavy toll on the party. Republicans are already struggling to make progress on issues like health care and tax reform, and the partisan atmosphere in Washington today pales in comparison to a full-blown impeachment drama.

Then there is the issue of public opinion.

In Nixon’s case, “it took a lot of information, a lot of revelations and a lot of time until he lost” the backing of Republican lawmakers and his core supporters, said Thomas Patterson, an expert on government and the media at the Harvard Kennedy School.

But once solid evidence of a White House coverup emerged, and Nixon’s efforts to block Cox’s independent investigation became clear, public opinion of the president turned, and Republicans had no choice but to follow suit. By the October night in 1973 when Elliot Richardson, the attorney general, and his deputy, William Ruckelshaus, resigned after refusing Nixon’s order to fire Cox, and then Nixon fired the special prosecutor anyway — the infamous “Saturday Night Massacre” — Republicans in Congress were ready to see Nixon go. 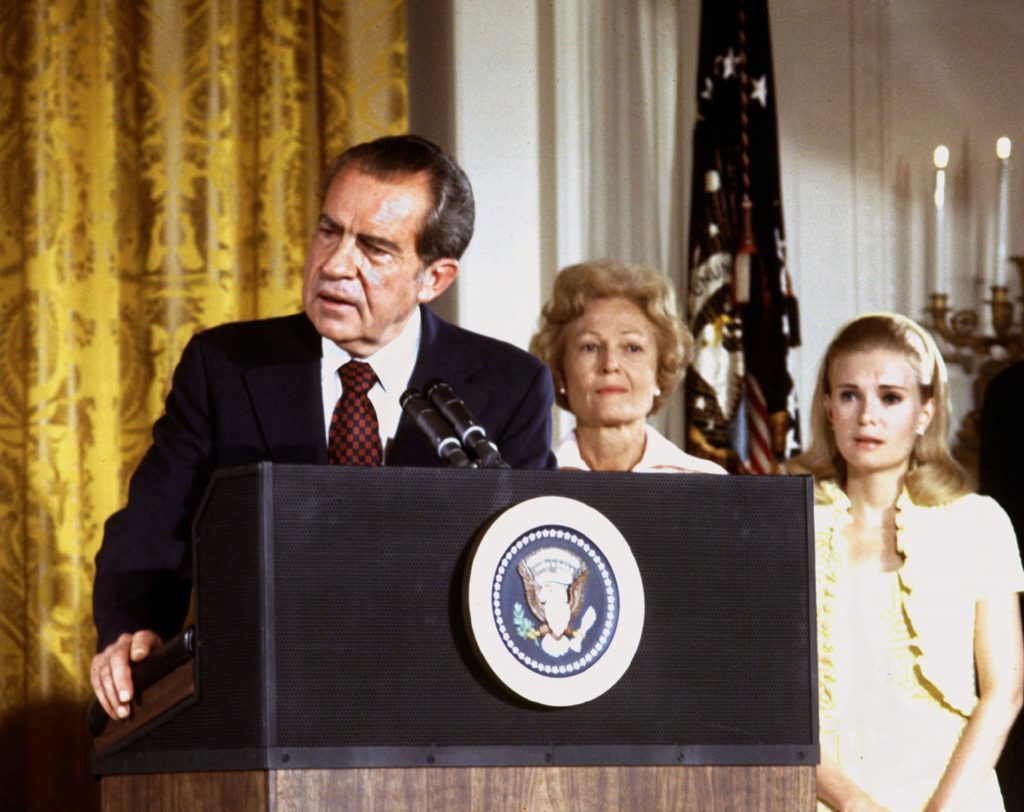 President Richard Nixon says goodbye to family and staff in the White House East Room on August 9, 1974, the day after he resigned from the presidency. File photo

“Republicans weren’t super aggressive in pursuing Nixon” at first, said Michael Greenberger, an aide to Richardson at the time who went on to serve in the Department of Justice under President Bill Clinton. “When the evidence was clear, the Republicans fell in line.”

The political dynamic is different this time around. In the 1970s, incumbent lawmakers from both parties faced far fewer primary challenges than they do now. Today, a Republican who abandons Trump runs the risk of angering the president’s supporters, and drawing a primary opponent from the far right.

“The understanding in Washington is that all of these problems are beneficial for Democrats,” Patterson said. “If you join the parade as a Republican, it’s not going to help with Trump voters. You’re going to anger Trump’s base.”

The only way that would change, Patterson argued, is if Trump’s job approval rating plummeted in conservative parts of the country, and he became a liability for the Republican Party in the 2018 midterm election. Trump’s approval rating among all voters has hovered around 40 percent since he took office, and he remains extremely popular with conservatives.

Among Republican voters, 84 percent approve of the president’s job performance, according to a recent Quinnipiac University poll, compared to six percent of Democrats. Poll numbers will likely influence Republican lawmakers’ response to the investigations going forward, Patterson said, a reflection of the fact that many politicians today are more “electorally minded than institutionally minded.”

During Watergate, “when the evidence was clear, the Republicans fell in line.”

Peter Wallison, who served as White House counsel to President Ronald Reagan in the late 1980s, said Republican leaders in Congress deserved credit for launching several investigations into Russia’s interference in last year’s election. But he said it was clear that a fundamental shift has taken place.

“Unfortunately, we’re in a time now in which partisan politics are much more important than the institutional loyalties people have to the Senate and House,” Wallison said. In the past, he said, lawmakers were willing to stand up to a president from their own party. “That’s not true anymore.”

Wallison and others pointed to another important change from the Nixon era: the public’s growing distrust of the news media. It’s far less likely that a majority of Americans will come to a consensus about a president’s actions today, as happened during Watergate, in an era of “fake news” where Democrats and Republicans often disagree about the basic facts.

“We’re a lot more polarized than we were in the early seventies,” Patterson said, “and that creates barriers to movement” in public opinion.

The investigations into Trump’s associates and Russia have only begun, cautioned Greenberger, the former Justice Department official. Right now, “there’s still people who call it fake news and don’t want to believe it. But every day it gets worse and worse. I just don’t think it’s going to get better.”

“With Watergate, in the end, the facts and the evidence were just overwhelming,” said Shapiro, the polling expert at Columbia University. “At this juncture with Trump, a lot more remains to come out.”

“The question is,” Shapiro added, “even when we know all the facts, how much will polarization come into play? And how much will Trump supporters care?”