Entrepreneur and political novice Andrew Yang is hoping a wild gambit will help him win the Democratic presidential nomination: give 10 American families US$1,000 a month.

The announcement of a test run of his signature universal basic income proposal, which Yang argues is necessary to counter automation’s threat to millions of American jobs, garnered cheers from the student audience at the September debate and gave his candidacy a boost. At least half a million people have entered Yang’s basic income raffle.

Although he called his idea “unprecedented,” that’s not entirely true. It’s a direct echo of the Townsend Plan, the brainchild of another political novice who also believed that the solution to economic disruption and automation almost a century ago was to guarantee an income.

I wrote a book about that plan, the organization behind it and the man who promoted it throughout the country. I found that in times of economic insecurity, simple, straightforward guaranteed income proposals can be highly influential, even if they aren’t ultimately adopted.

He claimed that when he saw older women rooting around in his trash for food, an idea hit him: The federal government should guarantee an income of $200 per month – about $3,700 today – for Americans 60 years and older who agreed to stop working. Not only would their money worries end, he reasoned, but their renewed consumer spending would jump-start the economy and their retirement would reduce competition for jobs.

Townsend’s proposal, like Yang’s, was an explicit critique of bureaucratic cash transfers with delayed payoffs, restricted beneficiaries or income tests. Townsend ridiculed Franklin Roosevelt’s 1935 Social Security Act, whose flagship old-age program was not scheduled to pay anyone until 1942. And even then, only those aged 65 or older in a limited number of industries would qualify.

At the time, the Great Depression was in full swing and unemployment was over 20%. Most seniors were going unsupported, with at least 70% mired in poverty.

Also like Yang, Townsend didn’t wait for the federal government to pass his plan and instead began organizing “clubs” to promote the idea. These Townsend clubs spread from California across the nation. By early 1936, some 2 million Americans, almost all of them older, had joined around 8,000 Townsend clubs, paying a dime a month with the expectation that their support might help the plan become law.

That year the Townsend Plan was mentioned more than a thousand times in national newspapers. Members of Congress began signing on in support.

A success or ‘shortcut to utopia’?

Soon Townsend clubs in Washington, California, New Jersey and elsewhere decided to test the plan on randomly chosen club members. They gave the winners $200, assessed the quality of their purchases and calculated its economic impact.

But the plan was still derided by many mainstream economists as being unlikely to pay for itself and to end the Depression. Roosevelt dismissed the plan as a false “shortcut to utopia.” Yang’s plan is similarly criticized as not adding up.

Still, Townsend’s well-mobilized campaign and his infectious idea of a generous universal pension pressured Roosevelt and Congress to act. After voting down the Townsend Plan in June 1939, Congress amended the Social Security Act, making it more generous to the poorer elderly and speeding up payments for Social Security.

Yang’s catchy idea may catch on too

As with any historical analogy, there are limits.

Townsend organized his supporters into clubs, whereas Yang wants website visitors and Twitter followers to bolster his campaign.

And Yang’s “freedom dividend” – what the program is called if scaled up – would be more expensive because of its much broader reach. It grants $1,000 per month to all citizens over 18, including recent high school grads, Bill Gates and Jeff Bezos. 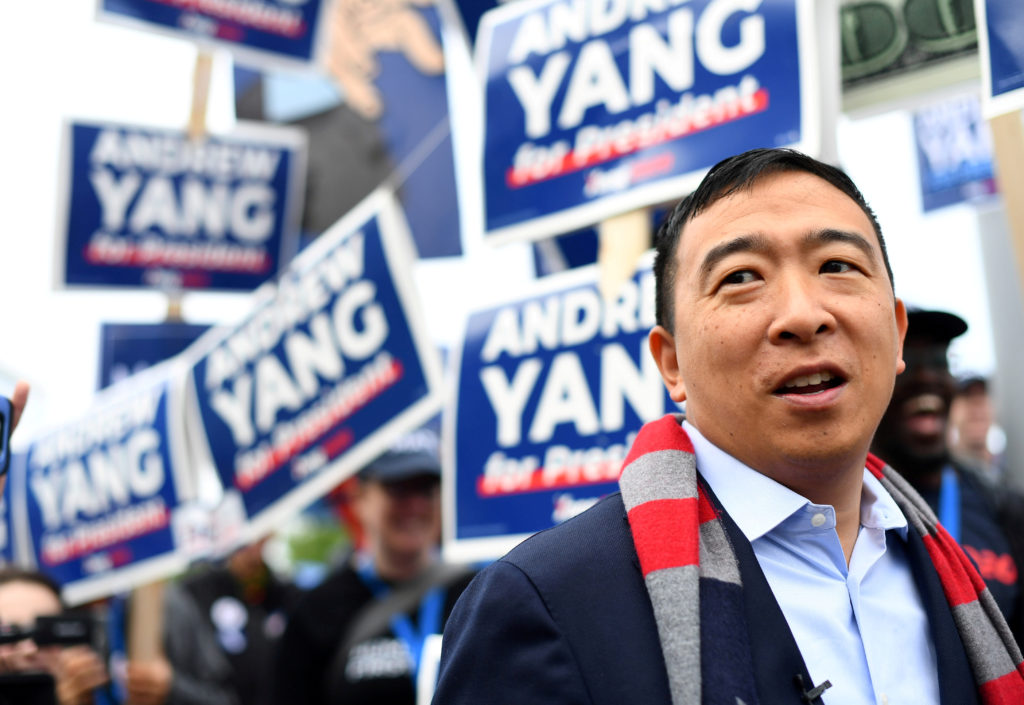 Yang argues his plan’s $2.8 trillion annual cost would be covered by several new taxes, including a value-added tax, and resulting savings from people giving up food stamps and other welfare programs in exchange for the cash transfers. Townsend proposed paying for his more limited plan with a 2% transactions tax.

But the lesson from each is that generous, unrestricted cash benefits are appealing and can win publicity and grassroots backing.

Although Yang’s candidacy remains a long shot, don’t be surprised if the eventual Democratic nominee embraces the enthusiasm behind his freedom dividend to propose boosting the generosity of existing income-support programs.

If that happens, 80 years from now Andrew Yang may not be well remembered, but millions of Americans would remain in his debt — just as seniors today owe a forgotten Californian doctor with a catchy idea.

[ You’re smart and curious about the world. So are The Conversation’s authors and editors. You can read us daily by subscribing to our newsletter. ]

Left: U.S. Democratic presidential candidate and businessman Andrew Yang poses for a selfie during a forum held by gun safety organizations the Giffords group and March For Our Lives in Las Vegas, Nevada, October 2, 2019. Photo by Steve Marcus/Reuters

Edwin Amenta is a professor of sociology at the University of California, Irvine.