What senators are saying about the FBI’s Kavanaugh report

Last night, Senate Majority Leader Mitch McConnell announced the FBI’s investigation was complete and introduced a motion, known as cloture, to start a series of votes that could lead to a final confirmation vote on Kavanaugh this weekend.

The FBI’s investigation into new sexual misconduct allegations against Kavanaugh is being held in a secure location at the Capitol. Some key Republican senators have said they were waiting to review the report before making a decision on how they would vote. Republicans need 50 “yes” votes to get cloture, which would trigger a final 30-hour window of debate on Kavanaugh’s nomination. There are 51 Republicans in the Senate.

Here’s what senators are saying about the FBI report and Kavanaugh’s nomination.

“I think the report actually verified the view that Brett Kavanaugh’s conduct has been appropriate,” he told the PBS NewsHour. The congressman said he had the FBI file on loan from the administration.

“The Judiciary staff went through all of the witnesses’ testimony and talked about it,” he said. “Fifty pages of an interview is like reading 50 pages of conversation in a book. It’s not like 50 pages of nuclear physics or anything like that.”

“The FBI was not limited in any way,” Kennedy added.

“There was zero, I repeat, zero corroboration,” Daines said. This is “now the seventh FBI investigation of Judge Kavanaugh. It is time to vote.”

“There was nothing new, there was no corroboration, if that’s the right word. Nothing caused me to pause and think I didn’t already have all the information I needed, but this confirmed it.”

When asked whether any of the accusers stories were undermined, Isakson told the NewsHour’s Lisa Desjardins, “No ma’am … but all the people who needed to be talked to were talked to and I think the expansion was a good idea. It was better for the American people, the integrity of the system, the United States Congress and the Supreme Court that we did that.”

Flake, who requested an FBI investigation into new allegations against Kavanaugh last week, said “there was no additional corroborating information” in the report.

NOW: Sens Collins and Murkowski are among those in the secure area for reading the FBI report. Believe they expect to be there a while.
Murkowski told our @DanielBush she may come back again later if not enough time now.
(Here's photo of collins going on.) pic.twitter.com/hJeg28zP1y

“It appears to be a very thorough investigation but I am going back later today to personally read the interviews,” Collins told the NewsHour.

Collins is one of a handful of key “undecided” senators Republicans need to push Kavanaugh’s confirmation through.

“There was no corroboration,” the Tennessee senator told reporters.

Corker also said he thinks the FBI received thousands of tipline messages, but that he needed to confirm that.

He also said the FBI report is broken up by interview into different packets. One person would read each interview packet and then shuffle them around, he said.

HOW SENATORS ARE GOING THROUGH THE REPORT: There is one report and dozens of senators.

But Sen. Rounds just told me they are divvying up sections, such as each witness interview, or a section on text messages, and each tackling a piece at a time as they sit around a table. 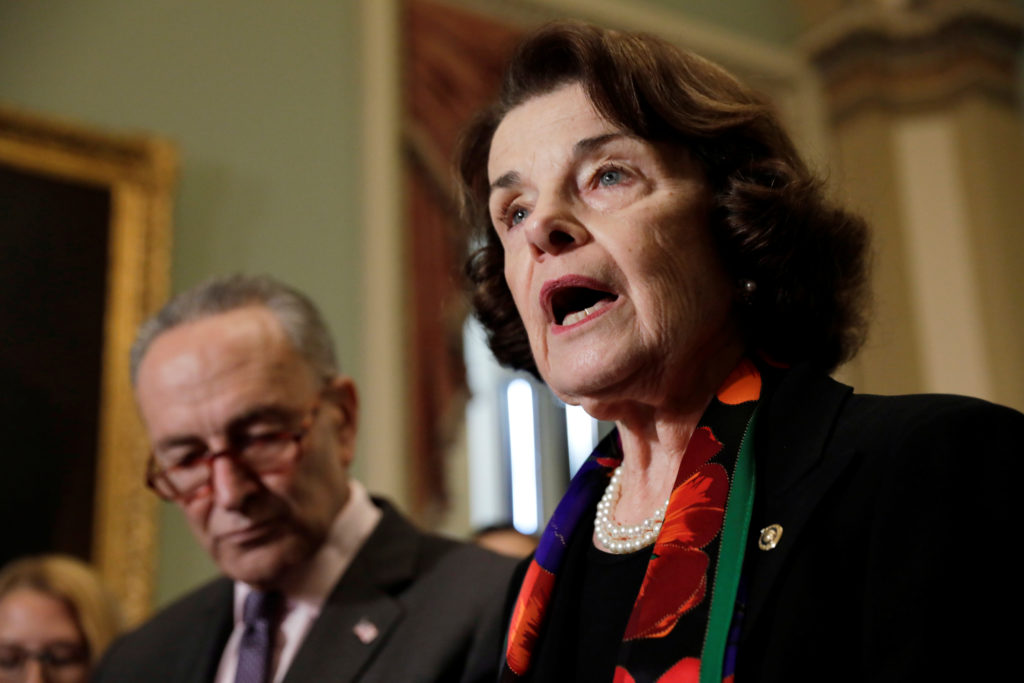 “The most notable part of this report is what’s not in it,” Sen. Dianne Feinstein, the ranking Democrat on the Senate Judiciary Committee, told reporters Thursday. Feinstein said the FBI didn’t interview Kavanaugh or his accuser Ford.

“[The FBI report] looks to be a product of an incomplete investigation that was limited, perhaps by the White House. I don’t know,” the California senator said. “But the White House certainly blocked access to millions of documents from Judge Kavanaugh’s record. I know that.”

Sen. Chuck Schumer told reporters that Democrats had “many fears that this was a very limited process that would constrain the FBI from getting all the facts.” After being briefed on the FBI’s Kavanaugh report, he said, “those fears have been realized.”

The New York senator said he disagreed with the Senate Judiciary Committee Chairman Sen. Chuck Grassley’s statement that the report found “no hint of misconduct” by Kavanaugh.

Schumer then called for the report to be released publicly. “Why shouldn’t all of American see the facts?” the senator said. Schumer also called for the White House to make its directive for the FBI investigation to be made public as well.

“It appears that the White House completely circumscribed the investigation to try to make it meaningless, and they succeeded,” Merkley said.

“There is much in there that raises questions,” said Booker, who at one point walked out of a Senate Judiciary Committee hearing last week ahead of the vote to advance Kavanaugh’s nomination to the full senate.

“There is significant evidence that there are other relevant witnesses that have not been contacted, not been interviewed. This was a very constrained set of interviews,” he added.

“This so-called investigation leaves a lot more questions than answers,” said Harris, who was also among the group of Democrats that walked out of last week’s Judiciary Committee proceedings.

“This report raises more questions than it answers. It is really a story of unfollowed leads, uninterviewed witnesses, unanswered questions. In fact, it smacks of a whitewash,” Blumenthal said.

“These interviews only deepen my concern about temperament and trustworthiness,” he added.

Gillibrand said she can’t speak to the details of the report, but did say, “I’m disappointed, and I do not believe this investigation was designed to get to the truth or to the facts.”

“Given statements from lawyers that I’ve heard,” Gillibrand said, “they have many witnesses the FBI didn’t interview.”

When asked whether Republicans’ description of the FBI report as offering no additional corroborating evidence was accurate, Whitehouse paused and said “no.”

Asked by Desjardins and other reporters to elaborate, Whitehouse said: “No. I’m going to have to think through the constraints Republicans put on us in talking about this before I can figure out what I can say.”

“This is not a comprehensive FBI investigation from which we can draw conclusions.”

“I’m just taking it in. I’m going to give it some thought before I have anything to say.”

Markey said the White House and Republican leadership, in conjunction with the FBI, “conducted a very limited investigation.”

“They did not follow leads, they have not in fact pursued the names of people who could have been extremely helpful to ensure there was a full understanding of his background. So I’m concluding that we are in a process that was limited, that it is not going to provide the whole truth to the American people about Brett Kavanaugh — and Donald Trump and the Republican leadership have constructed it to accomplish that goal.”

After reviewing the FBI report, Coons said he was left with more questions than answers, adding that the agency’s investigation didn’t “meet the scope and thoroughness that I called for.”

“The materials are what they are, and it is now left to senators to reach their conclusions,” the Delaware senator said. “I do not think we have as thorough and fulsome a job of assessing the facts in these allegations as we should have, and as both Dr. Ford and Judge Kavanaugh deserved.”

The FBI “did not pursue every lead, they did not talk to all of the available people,” Warren said, adding she would have more to say later.

Manchin said he started reading the report, but is still reviewing it. He plans to finish Friday morning.