Obama’s VP pick was a clear choice. Biden’s won’t be

Former President Barack Obama has said picking Joe Biden as his running mate in 2008 was “one of the best decisions” he ever made.

It was also a no-brainer, as vice presidential picks go. Choosing a veteran white lawmaker like Biden was a natural fit for Obama, then a 47-year-old freshman senator facing questions about his age, inexperience and whether the nation would elect a black president.

Now that it’s Biden’s turn to pick a No. 2, the answer is far less clear.

Biden’s promise earlier this year that he would choose a woman as his running mate narrowed the field of potential vice presidential candidates. Biden, who is 77 and would be the oldest U.S. president ever to hold office if elected, is also widely expected to pick a younger running mate.

“Given the vice president’s age, he needs to pick somebody who could be president on day one,” said Jerry Crawford, an attorney in Iowa who has served as a senior Midwest advisor to several Democratic presidential contenders.

Beyond that, there is still no consensus in Democratic circles about whether Biden, the party’s presumptive nominee, should choose a woman of color or a white running mate; a progressive or a moderate; and whether it should be someone from a key battleground state or region, like the Midwest, who could give Biden an advantage against President Donald Trump in the general election.

While Obama’s choice of Biden was “broadly acceptable throughout the party,” that level of consensus may be harder to achieve today, said Charles Franklin, the director of the Marquette Law School Poll in Wisconsin.

“He needs to pick somebody who could be president on day one.”

It eluded the last Democratic nominee, Hillary Clinton, in 2016. In choosing Virginia Sen. Tim Kaine, Clinton was criticized by some Democrats for going with a moderate white man as her running mate instead of a younger, more progressive candidate, or a person of color. Whoever Biden picks will inevitably spark backlash among Democrats at a time when the party is increasingly split along ideological lines.

“A good choice will excite some groups and be acceptable to others,” Franklin said. “A bad pick [would] fail to satisfy any group” within the party and could anger powerful constituencies if they feel passed over.

The speculation surrounding the decision has centered in large part on whether Biden will choose a person of color as his running mate. Biden owes his success in the primaries to black voters, who carried him to victory in South Carolina in late February and in several other southern states on Super Tuesday in early March.

The victories put Biden on the path to winning the nomination. He is expected to formally clinch it as soon as next week, when a number of states that postponed voting because of the coronavirus pandemic will hold their presidential nominating contests. 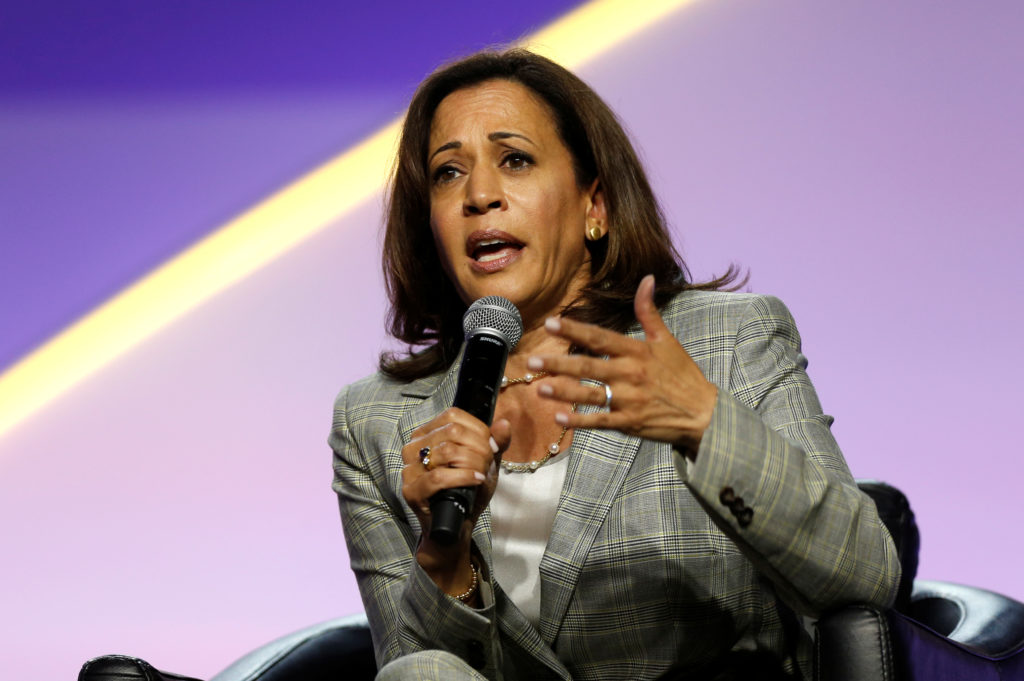 Sen. Kamala Harris of California is reportedly on the short-list of vice presidential candidates that Joe Biden is considering. File Photo by Rebecca Cook/Reuters

Among the non-white candidates reportedly under consideration, Sen. Kamala Harris of California — the second black woman to serve in the Senate — has the highest national profile, thanks to her 2020 presidential campaign. Stacey Abrams, a black former state legislator who lost a close race for Georgia governor in 2018, has also developed a national following.

New Mexico Gov. Michelle Lujan Grisham’s name has also come up as a potential vice presidential pick. So far, she and Sen. Catherine Cortez Masto of Nevada are the only high-profile Latinas reportedly under consideration for the job.

Some black activists and Democratic officials dispute the notion that Biden needs to pick a black running mate in order to lock in the support of black voters — or that black voters want him to make race a determining factor in his decision.

“I don’t think that picking a person of color will really impact the black community to vote for or against him,” said Willie Booker, a community organizer in Orangeburg, South Carolina. “Ninety percent of black voters are going to vote for Biden regardless of who he’s going to select as a running mate.”

Starting with the 1992 election, when Bill Clinton ended the Republican Party’s 12-year reign in the White House, every Democratic candidate for president has won between 83 and 95 percent of black voters.

Turnout among black voters increased from 1996 through 2012, when it reached a record 66.6 percent, according to a Pew study. In 2016, black voter turnout dropped to 59.6 percent, the largest election year-to-election year drop for black voters in history, the study found. Clinton’s loss has often been attributed to the drop.

It’s likely most black voters will back Biden in 2020, but the moves he makes in the months leading up to the election could inform turnout, and gaffes like his recent radio show comment haven’t helped. “If you have a problem figuring out whether you’re for me or Trump, then you ain’t black,” Biden said on “The Breakfast Club.”

“He had to apologize for that statement. But now people are saying, ‘OK, what’s the action to show that that apology was sincere?’” said Gaddy, who is black. “In my opinion the optics are truly against him choosing a white female.”

Biden said at a fundraiser Wednesday that he hoped to name his vice presidential pick around Aug. 1. “I think that I need somebody who in fact is simpatico with me, both in terms of personality as well as substance,” Biden said at the virtual fundraiser, according to a press report on his comments.

In a CNN interview Tuesday, Biden said his vetting team was in the process of coming up with a “basic cut” of finalists and added that “there are women of color under consideration.”

The idea that a vice presidential candidate can increase turnout among a particular voting bloc isn’t born out by the results in recent elections.

The idea that a vice presidential candidate can increase turnout among a particular voting bloc isn’t born out by the results in recent elections, said Christopher Devine, a political science professor at the University of Dayton who studies the vice presidential selection process.

Where the choice of a running mate matters most is in how it reflects on the decision-making of the person at the top of the ticket, Devine added.

“When they’re evaluating if Joe Biden has good judgment, good leadership skills, whether he can be trusted, or on ideology — whether he’s moderate or a progressive — that’s where the choice of a running mate can matter,” he said. 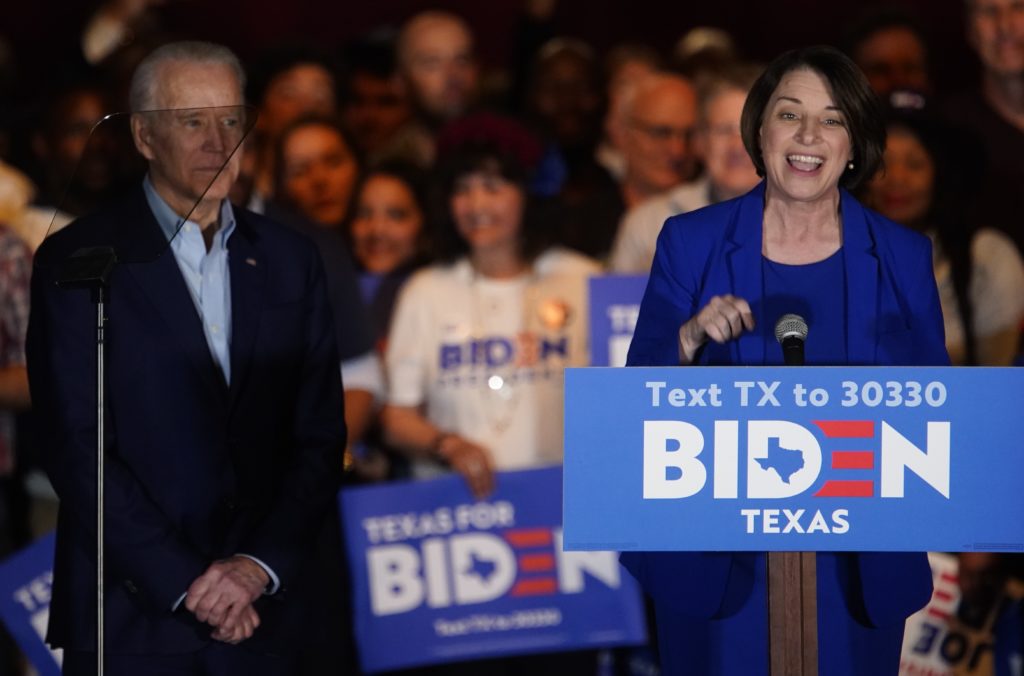 Sen. Amy Klobuchar of Minnesota endorses Joe Biden at a campaign event in Dallas, Texas, on March 2, 2020. Klobuchar is reportedly under consideration to be Biden’s running mate. REUTERS/Eric Thayer

Ronnie Sabb, an African American state senator in South Carolina and a Democrat, said if a white vice presidential candidate is chosen, he would not interpret the decision as a signal that Biden was taking his support among black voters for granted. Biden should base his choice on who he thinks would make the best leader, regardless of the person’s race, he said.

“Kamala [Harris] would be a great addition to the ticket,” Sabb said. But he added that she was not his top choice — and suggested Biden should consider going back on his promise to pick a woman in order to choose a male politician who has garnered national praise for his handling of the coronavirus crisis: New York Governor Andrew Cuomo.

Biden’s “heart is and was in the right place, in terms of his thought process associated with selecting a woman. But given the extraordinary leadership Governor Cuomo has exhibited during this time, his name ought to be on a shortlist,” he said.

Biden has given no indication that he is willing to go back on his promise and pick a man. Nor has he tipped his hand about whether he prefers a moderate running mate — like Michigan Gov. Gretchen Whitmer or Minnesota Sen. Amy Klobuchar — or someone more progressive, like Harris or Sen. Elizabeth Warren of Massachusetts, who is also reportedly in the running despite being closer in age to Biden. (Warren is 70 years old; Klobuchar is 60, Harris is 55, Whitmer is 48, and Abrams is 46).

Progressive Democrats have called on Biden, who is running as a moderate, to pick a liberal to balance the ticket and help him win over voters who backed Warren and Sen. Bernie Sanders of Vermont in the primaries. But that strategy “depends on whether Biden sees his ideology as a weakness,” Devine said.

Since becoming the presumptive nominee Biden has embraced some of Sanders’ and Warren’s progressive policy proposals. But he has continued to run as a more moderate Democrat, along the lines of Hillary Clinton and Obama.

“I think he does see his moderate profile as being an advantage,” Devine said, in which case “there’s no more need [for Biden] to balance that out with a progressive running mate than there would be to balance out his wealth of experience with a less experienced running mate.”

Instead of picking an ideological opposite, strategists from both parties said Biden’s smarter move would be to follow Bill Clinton’s example in 1992 and choose a like-minded running mate.

“Clinton looked in the mirror and said, ‘All right, what am I selling?’” and the answer was a new brand of moderate Democratic politics, said Mike Murphy, a Republican consultant who served as a senior adviser on the presidential campaigns of John McCain in 2000 and Mitt Romney in 2012. Clinton’s choice of Al Gore — another young, moderate southern Democrat — reinforced his political identity, Murphy said.

“The worst thing to do is pick a liberal because then the whole debate is ‘are you liberal?’” Murphy said. The thing Republicans are most worried about is Biden not choosing a progressive, and instead going with a moderate who is “kind of blah, and not threatening to the suburbs,” he added.

“The liberal wing of the Democratic Party is not going to have a choice” in November, said Lawrence Jacobs, a political science professor at the University of Minnesota. Biden can “have a high level of confidence, and I think he should, that he won’t need to be fighting for the support of liberals.”

The final decision will likely come down to Biden’s personal rapport with the candidates on the shortlist and their track record as legislators or chief executives, Jacobs said.

If Biden wins, he’ll take office with “a country that’s going to be in tatters” because of the public health crisis, “and we will [still] be most likely in the middle of a pandemic. He needs someone who is a reliable partner.”

Left: Former Vice President Joe Biden has said he would name a running mate around the start of August. There is still no consensus in Democratic circles about who would be the best choice. File Photo by Scott Morgan/Reuters.