Photos of a billboard written in Arabic have been making the rounds on social media ever since the sign popped up on a major highway between Detroit and Dearborn, Michigan — a suburb with a large Arab-American population. The translation is: “Donald Trump, he can’t read this, but he is afraid of it.”

The Nuisance Committee, a super PAC based in Chicago that started this year, has claimed credit for the ad. The super PAC was created by Cards Against Humanity co-founder Max Temkin to “poke at Donald Trump in the last stretch of the election.”

We spoke with Nuisance Committee spokeswoman Melissa Harris to find out more about the project and what they plan next. The interview has been edited for clarity and length.

What did you hope to accomplish with the billboard?

Because Michigan is a swing state we wanted to make sure that Arab-Americans in Dearborn, Michigan and in all of Michigan stand up and have their voices heard and be counted. So the first purpose is to drive people to the polls.

The second purpose is to really point out the lack of logic or even reality underpinning Donald Trump’s hateful, anti-immigrant rhetoric. It’s rhetoric that I think is based in fear, not on reality. We also hoped it would promote dialogue between Arabic and non-Arabic speakers and perhaps lead to greater understanding and less fear.

Has Donald Trump reacted to it yet?

Not to our knowledge.

As a super PAC you had a lot of options on how to approach advocating your viewpoints. Why did you choose satire instead of more conventional means?

Cards against Humanity is a funny game so humor is what we specialize in. The other thing is we wanted to be clever and witty instead of participating in the kind of meanness or cruelty that Donald Trump espouses. That is not our style. 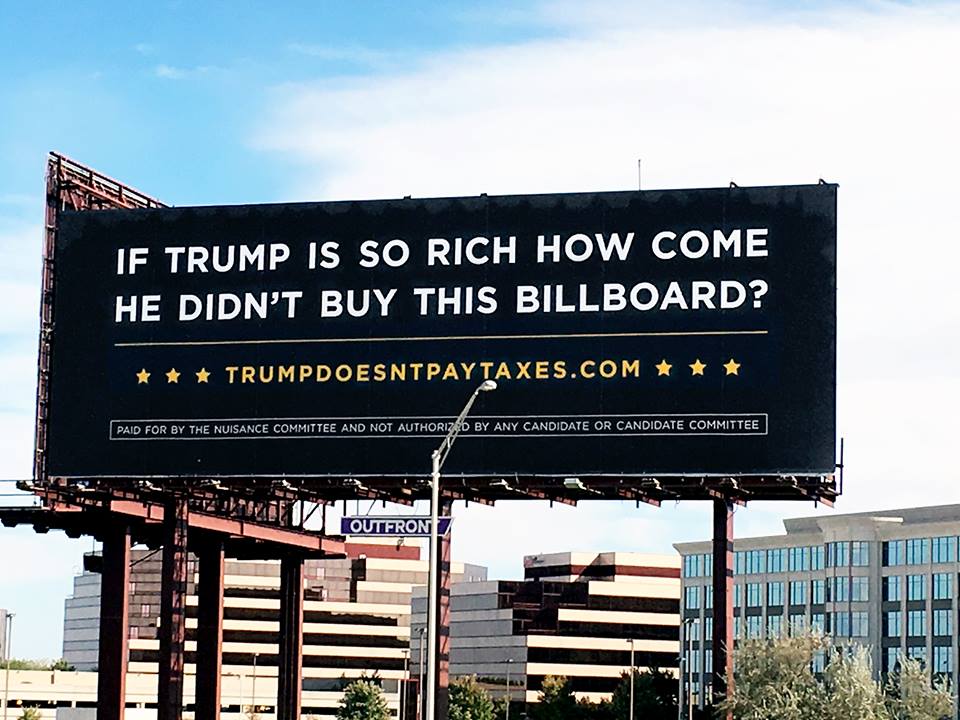 This billboard was erected outside Chicago’s O’Hare airport. Photo courtesy of Outfront Media

When did the Nuisance Committee first register as a super PAC? Who’s behind it?

We registered this year. All of our money comes from the sale of Donald Trump and Hillary Clinton Cards Against Humanity cards. Those sales began in August and we launched our first campaign in late September 2016. We have a real-time tracker on our site so you can actually see how much we’ve raised. (Editor’s Note: More than $400,000 at press time.)

The Nuisance Committee would have never formed if Donald Trump hadn’t secured the GOP nomination. We see him as an unfit irrational illogical tempestuous individual. I think that voters in prior elections presented with two reasonable options and we don’t feel that is the case this time around.

What’s the story behind the name the Nuisance Committee?

Our founder Max Temkin’s grandfather was shot down over Nazi Germany on his 24th combat mission and he became a prisoner of war. He was held in a Nazi POW camp. There, his grandfather and a few other POWs banded together to form a “Nuisance Committee” to irritate their captors in ways that wouldn’t get them shot.

(Editor’s Note: This would include covertly feeding the guard dogs red peppers from a hollowed out can of Spam at night so they would get diarrhea, which the Nazi guards would have to clean up in the morning.)

What else do you have up your sleeves?

This weekend we are loading up a bunch of comedians on a bus in Chicago and driving to Cleveland where they will canvas for Hillary Clinton. On Nov. 5 we will be doing that again in Iowa City. We might have one more billboard going up. All I can say about that is it will be west of the Mississippi.