What to watch in Tuesday’s primaries

Voters will head to the polls in five states Tuesday as the 2018 primary season continues. The contests — in Nevada, Maine, North Dakota, South Carolina and Virginia — include key Senate seats held by vulnerable incumbents from both parties.

Sen. Heidi Heitkamp, D-N.D., does not have a primary challenger, and Sen. Dean Heller, R-Nev., is expected to win his primary easily. But their general election bids this fall will likely be among the most closely watched Senate races of the 2018 midterms.

Here’s a guide of things to watch for in Tuesday’s primaries.

Can Heitkamp hang on this fall?

Heitkamp is one of 10 Senate Democrats up for re-election this year in states that President Donald Trump won in 2016. They include important presidential-year swing states such as Florida, Ohio, and Pennsylvania that helped seal Trump’s victory two years ago. Democrats need to defend these seats and gain a few others in order to regain control of the Senate, where Republicans currently hold a slim 51-49 majority.

North Dakota is a deeply conservative state; it hasn’t voted for the Democratic presidential nominee since 1964. But Heitkamp, who is seeking her second term, is popular with North Dakotans, thanks in large part to her strong advocacy in Washington for the state’s agriculture and energy industries. She has also established herself as a moderate Democrat with a reputation for working with Trump and Republicans — something that could be seen as an asset by voters in a state that Trump carried by 35 points in 2016. 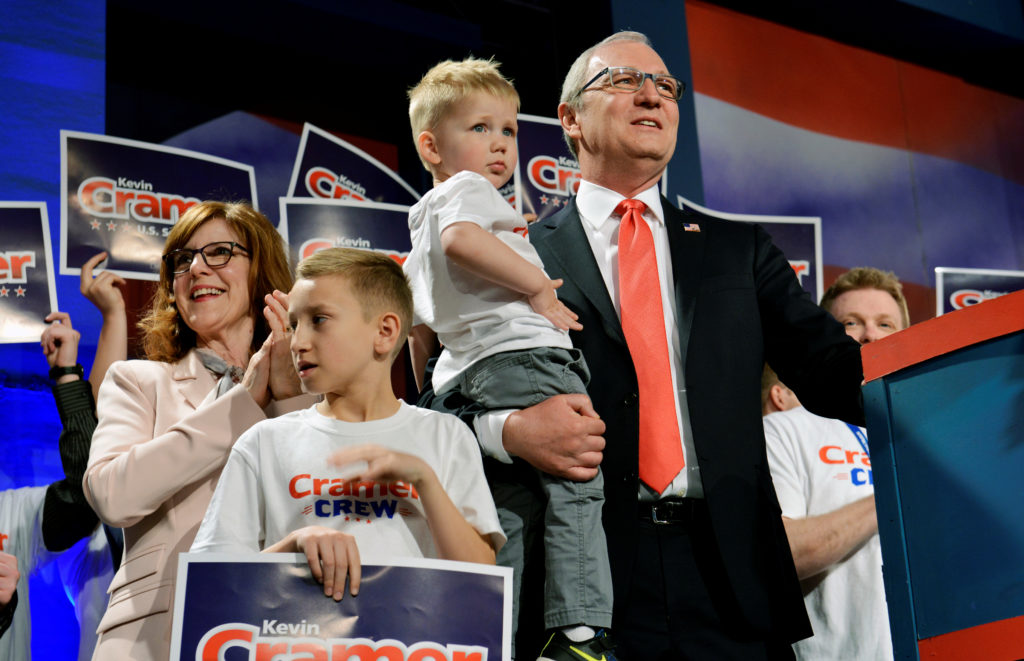 Rep. Kevin Cramer, R-N.D., with his wife Kris and sons Abel and Beau, cheer after the party endorsed Cramer for the U.S. Senate race against Heitkamp, at the 2018 North Dakota Republican Party Convention in Grand Forks, North Dakota, on April 7, 2018. REUTERS/Dan Koeck/File Photo

The fact that Heitkamp is running unopposed this year speaks to her strong standing with the state’s Democratic Party. Still, she’ll face a difficult general election against Rep. Kevin Cramer, R-N.D., the likely GOP Senate nominee. Cramer has already attacked Heitkamp for not doing enough to support Trump’s agenda, previewing his strategy this fall.

Nevada is crucial to the Democrats’ chances of winning back the Senate. Demographic changes have made the state increasingly liberal in the past decade; former President Barack Obama won Nevada twice, and former Secretary of State Hillary Clinton edged out Trump by two points there in 2016. Democrats have long eyed Heller’s seat, making him one of the GOP’s most vulnerable incumbents this cycle.

Nevada is crucial to the Democrats’ chances of winning back the Senate.

Heller faced a potentially strong primary challenger in Danny Tarkanian, a businessman who has run unsuccessfully for the House and Senate in Nevada before. But Tarkanian announced in March that he would run for a House seat after Trump urged him on Twitter not to take on Heller. The tweet cleared the way for Heller, who is expected to cruise to victory over four other GOP challengers Tuesday. Rep. Jacky Rosen, D-Nev., is the favorite in a crowded Democratic primary field. 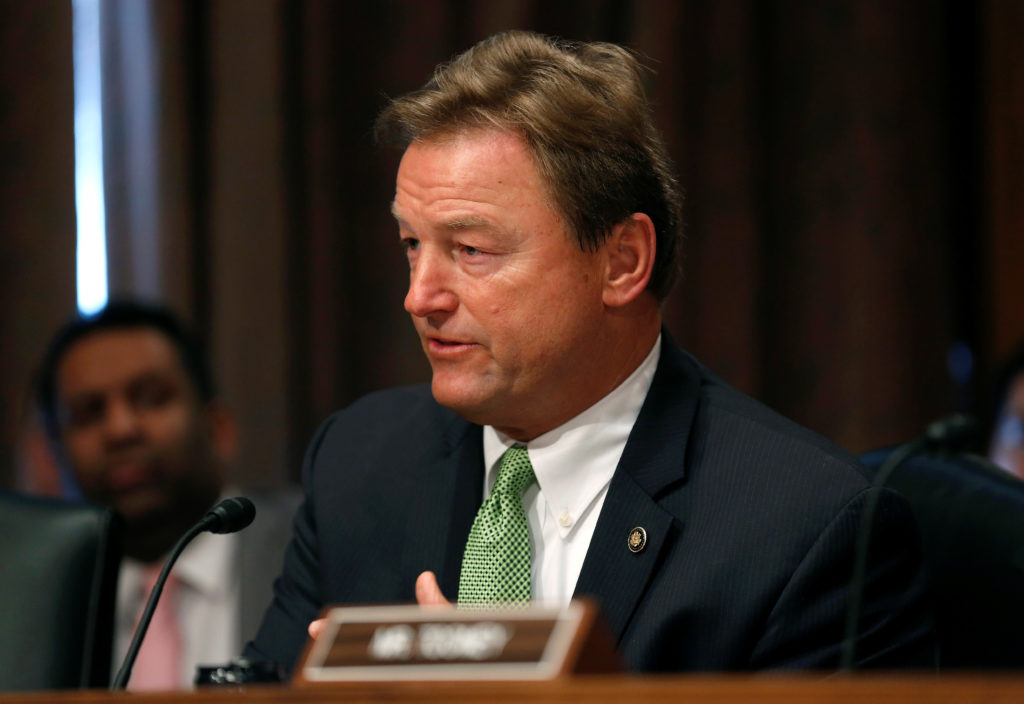 Trump’s support for Heller in the primaries was a significant development, given the Nevada Republican’s lukewarm public support for Trump during the 2016 election. If Trump continues backing Heller in the general election, it will likely boost his odds of winning re-election.

Trump’s takeover of the GOP

A GOP primary for a House seat in South Carolina has highlighted Trump’s growing grip on the Republican Party. Rep. Mark Sanford, R-S.C., a vocal Trump critic, is facing a serious challenge from Republican state Rep. Katie Arrington, a Trump supporter who has attacked the state’s former governor for being too critical of the president.

Sanford is one of several Republican candidates in 2018 who have faced criticism from the right for speaking out against Trump. If Sanford wins, it would signal that there’s some room left in the party for lawmakers who occasionally oppose the president’s rhetoric and policies. If he loses, it would be a warning to other incumbent Republicans who have criticized Trump in the past.

Kaine and the Democratic Party divide 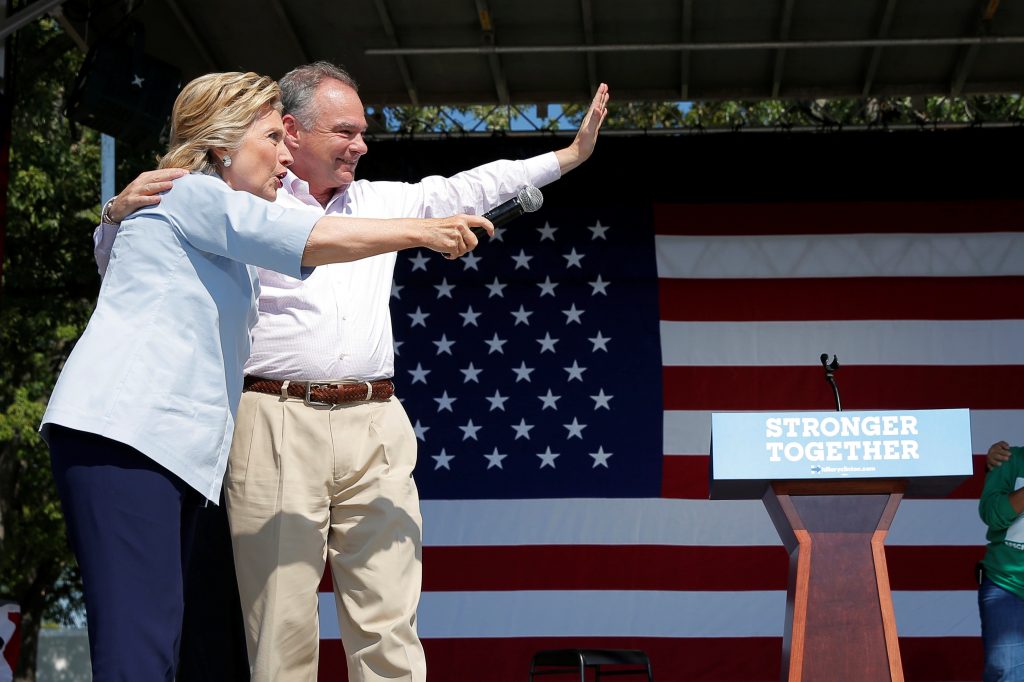 Sen. Tim Kaine, D-Va., on the campaign trail with Hillary Clinton in 2016. Kaine is up for reelection this year, in a race that will test the left’s enthusiasm for moderate Democrats. REUTERS/Brian Snyder/File Photo

Sen. Tim Kaine, D-Va., is not facing a primary challenge Tuesday, a sign of his longtime dominance among Democrats in Virginia, where he served as governor from 2006 to 2010. But the primary remains important because the turnout for Kaine will provide clues about enthusiasm on the left headed into the general election this fall.

Kaine touted his liberal voting record as well as his fluency in Spanish as the Democratic vice presidential nominee in 2016, a nod to the party’s increasing reliance on Hispanic voters. But he was widely viewed as a safe choice when Clinton added him to the ticket. The pick disappointed liberal voters who had hoped Clinton might choose a more progressive running mate.

That divide on the left never went away. Two years later, the party’s progressive base is still clamoring for politicians like Sens. Elizabeth Warren, D-Mass., and Bernie Sanders, I-Vt., to lead the Democrats’ fight against Trump. Establishment Democrats like Kaine are still figuring out where they fit in the party’s Trump-era ecosystem. Kaine’s primary Tuesday will test how much enthusiasm moderate Democrats can drum up in 2018.

Left: Sen. Heidi Heitkamp, D-N.D., is one of 10 Senate Democrats up for reelection in states that President Donald Trump won in 2016. (Photo by Mark Wilson/Getty Images)