What we know about Maria Butina’s plea agreement

With her guilty plea Thursday, Maria Butina became the first Russian national to admit to trying to influence U.S. politics before the 2016 election, the latest in a week of developments in ongoing federal investigations related to Russia.

In her plea agreement, Butina admitted to conspiring to work as a foreign agent in the U.S. under the direction of a Russian official identified in court documents as a deputy governor of Russia’s central bank. The official has been identified as Aleksandr Torshin by several major news outlets.

According to the plea deal, Butina also worked with another person, identified in court documents as “Person 1,” to build connections with conservative groups in the U.S. including the NRA. The person is widely reported to be Paul Erickson, Butina’s boyfriend and a longtime Republican political operative.

The investigation is not part of special counsel Robert Mueller’s probe into Russian interference in the 2016 election and potential ties to President Donald Trump’s campaign. Butina was arrested in July and charged by federal prosecutors with two counts: the first was conspiring to work as a foreign agent; the second was acting as a foreign agent, a more substantive crime. Butina pleaded guilty to the first count.

“Count 1 carries a lower maximum sentence, which is why her lawyer negotiated a deal with DOJ that lets her plead to the lesser crime,” said Barak Cohen, a former Department of Justice lawyer who is now an attorney at Perkins Coie’s White Collar & Investigations practice.

Butina’s cooperation with the federal investigation could lead to post-sentencing credit that could lower her sentence, Cohen said.

The Russian government has denied knowledge of Butina’s activities.

“She’s facing 15 years in prison. For what?” Russian President Vladimir Putin said at a public meeting earlier this month. He added, “I started by asking all our secret service chiefs: who is she? Nobody knew anything about her!”

Russian Foreign Minister Sergey Lavrov claimed Thursday that Butina was subjected to a “kind of torture.”

“She is in the harshest conditions,” Lavrov said, according to a report in RIA Novosti. “For many, many months, in fact, she has been subjected to some kind of torture: they take her on walks walk in the middle of the night, forcibly interrupting her sleep, throwing her in solitary confinement and much more.”

According to prosecutors,Butina drafted a proposal with the help of Erickson called “Description of the Diplomacy Project,” in which Butina suggested finding back channels for communication between Russia and the United States.

In visits to gun rights conventions, Butina played up her experience and travel to the U.S.to help her gain access to major political figures, federal prosecutors said. In 2015, Butina invited NRA members to Moscow and, with Torshin’s help, tried to set up meetings with the group and high-level Russian officials, prosecutors said. 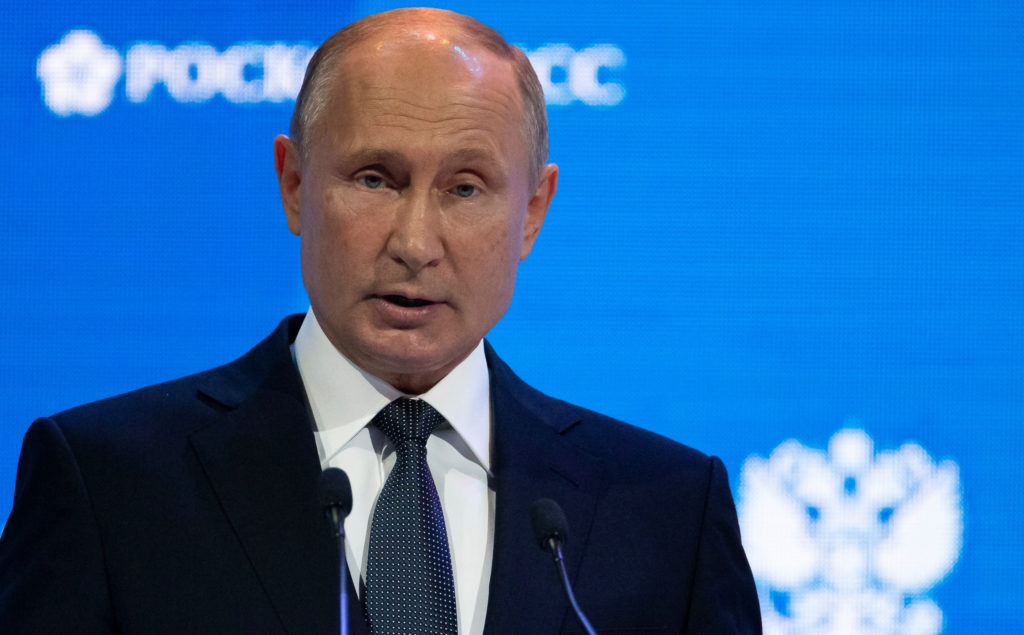 Russian President Vladimir Putin and other top Russian officials have questioned the significance of the case. Photo by Alexander Zemlianichenko/Pool via REUTERS

In her plea deal Butina also admitted to requesting $125,000 from a Russian billionaire to attend conferences and “separate meetings with interested parties” that would include Russian businessmen and officials from the Russian Ministry of Foreign Affairs, court documents read.

Additionally, prior to receiving her F-1 student visa to study in the United States in 2016, Butina had not disclosed that she was “acting as an agent of a foreign official,” prosecutors said.
“If somebody is representing a foreign government, but involved in the political process in some way, then that creates potential conflicts of interest and influences our political process,” Cohen said.

Other said they doubted Butina was working directly for Russian intelligence.

It’s unlikely “Butina was actually a formal intelligence officer,” said Steven Hall, a former CIA official and Russia expert. Instead, Hall said, Butin was probably “a Russian citizen who was approached by members of the Russian government.”

Before coming to the United States, Marina was a gun rights activist in Russia, making
appearances on national television shows and speaking at public events. She was also the founder and leader of “Right to Arms,” a Russian gun rights group.

In 2014, she participated in online elections to be part of the Civic Chamber of the Russian Federation, a civil society institution that monitors the Russian .She portrayed herself as a candidate who would advocate for gun rights.

Butina left “Right to Arms” in 2015 when she was accepted to a master’s program at American University in Washington, D.C.

Still, Saunders wrote in an email, Russian officials have added it to their list of grievances against the United States.