Russia’s attempts to amplify division in the U.S. have not stopped, according to a pair of reports released Monday.

A Russian “troll farm” has continued to sow discord on social media platforms in the U.S. since the 2016 election, planting fake news on Instagram and often targeting African-American voters as part of their misinformation campaigns.

This “active and ongoing interference” builds on known Russian tactics that were aimed at electing Donald Trump in the most recent presidential contest.

“Russia has waged a propaganda war against American citizens, manipulating social media narratives to influence American culture and politics” for about five years, one of the reports commissioned by the Senate Intelligence Committee said.

In waging information warfare, one of Russia’s primary goals is to “pollute the internet” and make it an “unreliable source for people,” including Russians, so that information that counteracts the Kremlin’s narrative cannot be trusted, Adrian Chen, staff writer for the New Yorker, told the NewsHour’s Jeff Brown in 2015.

The reports focus on the machinations of the Internet Research Agency, a well-funded organization within Russia’s propaganda wing that was indicted in February by special counsel Robert Mueller’s team for plotting to interfere with the 2016 U.S. presidential election.

Here are five takeaways from the reports.

1. The influence campaign targeted black voters and other minorities

The IRA, based in St. Petersburg, made a concerted effort to target African Americans on multiple platforms and “shared and cross-promoted authentic Black media” to heighten its own influence, according to the New Knowledge report. The IRA used that sway to campaign African-American voters to boycott the 2016 elections, support a third-party candidate, or use the wrong voting procedures, such as texting to vote. 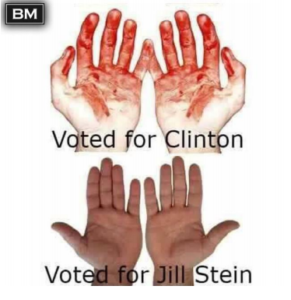 Overall, much of the messaging deployed by Russia and detailed in the reports targeted politically conservative Americans by encouraging them to be confrontational — specifically, by provoking people to “repeat patriotic and anti-immigrant slogans” and “elicit outrage with posts about liberal appeasement of ‘others’ at the expense of US citizens.”

The messaging designed for African-American voters, as well as members of the LGBTQ and Muslim-American communities, was meant to amplify mistrust in the 2016 election and U.S. political system.

“Messaging to African Americans sought to divert their political energy away from established political institutions by preying on anger with structural inequalities faced by African Americans, including police violence, poverty, and disproportionate levels of incarceration,” the Oxford-Graphika report read.

Russia’s minority-targeted messaging has lately broadened, perhaps in response to divisive current events inside the U.S. According to the report, there’s been a recent focus on outreach to Mexican-American voters and other members of the Latino community, a strategy that had been “limited until after the 2016 election.” Deportation and the mistreatment of migrants were reportedly among the topics that were expected to resonate with this group of voters.

Camille François, a research and analysis director at Graphika, told the NewsHour that the Russians are “targeting different minorities and more actively,” and that researchers have seen these much more subtle types of messaging emerge in the data set since the 2016 election.

While much of the attention has been centered around Facebook and Twitter, the reports said that the IRA shifted its efforts toward Instagram as its influence operation faced growing scrutiny in 2017.

That Instagram “was a significant front in the IRA’s influence operation” was a detail Facebook executives failed to mention in congressional testimony, according to the New Knowledge report.

In fact, the IRA’s Instagram posts outperformed similar posts on Facebook, totaling 187 million engagements compared with Facebook’s 76.5 million. The report also notes that 12 of the at least 133 Instagram accounts run by the IRA had more than 100,000 followers — the point at which an account is considered an “influencer,” according to New Knowledge.

3. A ‘wider and deeper data set’ — and bipartisan recognition of the issue

For members of the public who have been closely following the ongoing probes into Russian interference in the 2016 presidential election, there may not be many brand new revelations in the Senate reports. But the reports themselves offer more proof and more importantly, bipartisan confirmation of what many people already knew. .

“A lot of the trends that are being highlighted in both of these reports are trends that we were aware of before,” said Nina Jankowicz, a global fellow at the Wilson Center’s Kennan Institute who is currently writing a book on Russian influence campaigns in eastern Europe.

“We knew that Russia was targeting the black community, we knew that these pages had a very large, organic reach. I think what’s new is that it’s being confirmed in a bipartisan manner,” Jankowicz said.

The reports offer “a wider and deeper data set” and confirm “that the organic reach of these posts was quite large,” according to Jankowicz.

In May, the public previously got a look at the Russians’ targeting and messaging strategies when Democrats on the House Intelligence Committee released a cache of about 3,500 Facebook ads purchased by Russian agents and released from early 2015 through mid-2017. Many of the ads pushed arguments on contentious issues such as immigration and gun rights, and inflamed racial and social divisions with subjects like police brutality.

4. Using humor as a weapon

A number of typos or grammatical errors in the trove of 3,500 Russian-bought ads released by House Democrats this spring raised questions about the sophistication of the campaign. One ad hammered immigrants who “should prove that they are deserved to stay in the United States.” 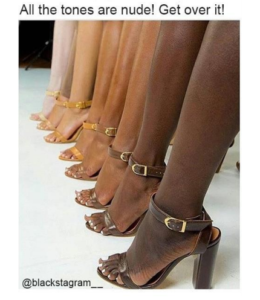 According to one of the reports, this Instagram post had the highest amount of engagement — in likes and comments — on that platform. Created by the IRA, it was posted on Instagram in June 2017.

In spite of the occasionally poor English, the Russians were able to use humor “that resonated well with their audience” to create “effective memes,” Jankowicz said. A big part of their interference campaigns in other countries as well, humor is one “way that they connect with the audience and build community.”

“The organic Facebook posts reveal a nuanced and deep knowledge of American culture, media, and influencers in each community the IRA targeted,” the report said.

That trust and sense of community enabled the IRA to recruit American human assets — “at least some of whom were not aware of the role they played,” according to one report — and schedule demonstrations by stoking both sides of controversial issues. In one instance, the IRA spent $200 on ads to organize dueling protests in May 2016 outside of an Islamic center in Houston.

5. What we know about what we don’t know

How many potential voters were actually swayed? These reports do not attempt to measure how many people may have changed their vote or decided to stay home on Election Day due to Russian influence. But if the IRA’s content affected the discourse surrounding the election, then it may have changed votes, Jankowicz said.

“If tens of millions of people were looking at and interacting with this content, we can only assume that, because it changed how they talked about the election, that it may have changed some of their behavior in the voting booth — whether that was turning up at all or who they pulled the lever for,” Jankowicz said. But she asserted that “it’s impossible to tell that to a finite degree.”

A limited amount of data from companies The social media platforms themselves have not been entirely forthcoming in helping the Senate Intelligence Committee’ illuminate the extent of Russia’s influence campaign.

The reports note that neither Twitter, Facebook, nor Alphabet, the parent company to Google, gave full data sets to the Senate Intelligence Committee. The information they provided “lacked core components that would have provided a fuller and more actionable picture,” according to the New Knowledge report.

Alphabet was the most uncooperative, providing the least amount of data, according to the reports. “Google chose to supply the Senate committee with data in a non-machine-readable format” rather than a format “that would be useful to data scientists,” the Oxford-Graphika report read.

Sen. Ron Wyden, D-Ore., a member of the intelligence committee, told the PBS NewsHour’s Judy Woodruff that the social media companies needed to be “much more vigilant and much more aggressive” in combating Russian disinformation. “I think they have been much more interested in raking in profits than dealing with efforts by the Russians to stack an election for Donald Trump,” Wyden said.

Who else was involved or affected? The reports look at just one Russian actor — the IRA.

But “there are a lot of other Russian actors who played a very important role” in the overall influence campaign, François told the NewsHour. She pointed to the known efforts by the GRU, Moscow’s military spy agency.

The data also demonstrated that this activity concerns many more American platforms, including accounts on Paypal, Tumblr and Reddit, among others, François said.

Even still, a big part of these efforts “remain undocumented and not analyzed.”