What would a Trump-Biden matchup look like? Dueling Pennsylvania rallies offer clues

MONTOURSVILLE, Pennsylvania — President Donald Trump took fresh aim at the crowded Democratic primary field at a campaign rally Monday, but saved his most pointed jabs for former Vice President Joe Biden, whom he accused of abandoning his Pennsylvania roots.

Trump’s attacks came two days after Biden — who moved from Scranton, Pennsylvania, with his family to Delaware as a child — held an official kickoff event for his campaign in downtown Philadelphia, a three-hour drive from Montoursville. The dueling rallies showcased what a possible general election matchup between the president and the current Democratic frontrunner could look like.

While the rivals lobbed predictable attacks against each other, interviews at both rallies with supporters offered fresh clues about how voters on each side view the competition.

“‘Sleepy Joe’ said that he’s running to, quote, ‘Save the world,’” Trump said at one point, adding, “He’s going to save every country but ours.”

The president’s supporters seemed to share Trump’s disdain for Biden. Several called him “Creepy Joe,” a reference to recent allegations from women that Biden gave them unwanted hugs or kisses at political events.

“I don’t know who would be [the most] competitive” in a general election matchup against Trump, said Piety Brandes, 59, a graphic artist and immigrant from Colombia who has lived in the U.S. for more than two decades.

By nominating Biden, Democrats would take a similar to 2016, when the party selected Clinton based on her Washington insider credentials, Brandes argued. “They said [that] Hillary” was the most electable Democrat as well and that backfired, Brandes said. 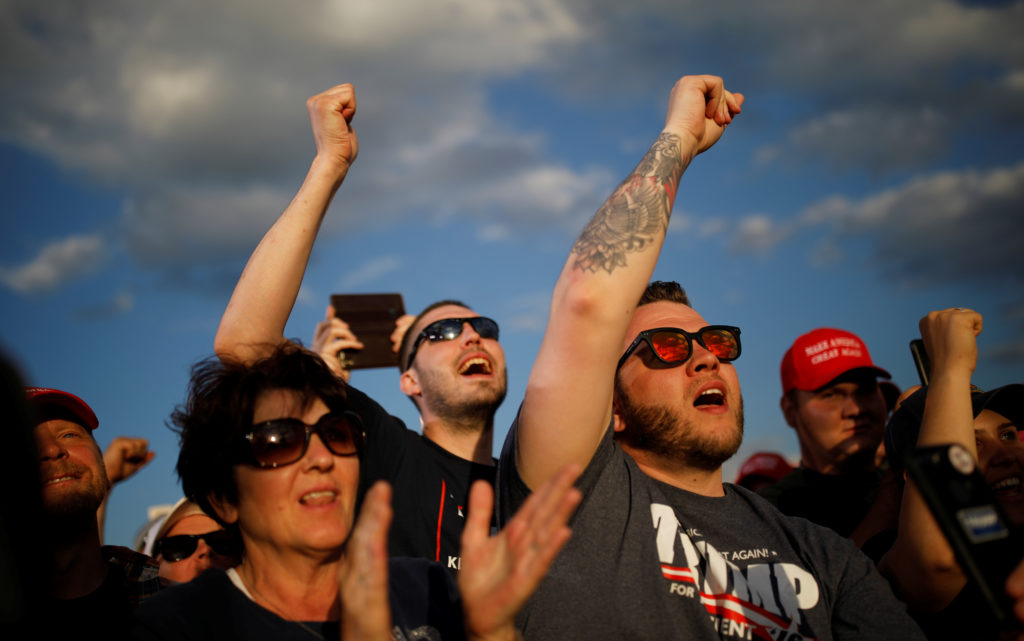 In interviews, supporters at President Donald Trump’s rally Monday said they were not concerned about the Democratic primary field. Photo by REUTERS/Carlos Barria

Biden “doesn’t have any substance,” said Michael Bitler, 57, a retired financial manager. Biden’s Democratic primary rivals aren’t any better, he said. “The rest [of the Democratic candidates] are all standing in a circle like a firing squad.”

Bitler said anyone who believes Pennsylvania is a presidential battleground state hasn’t talked to voters on the ground there. Gesturing to the Trump supporters around him, Bitler said: “People like us, we’re the ‘deplorables.’ They don’t realize how big our voting bloc is in Pennsylvania.”

Trump supporters at the rally largely said they agreed with Biden’s campaign message that the country’s civil discourse has eroded over the last two years. But they argued that Democrats and the media were to blame, and said Trump was only defending his character against baseless attacks.

“People literally hate each other just because of their party. That was already there” before Trump, said Alex Flynn, 20, who works at a McDonald’s. “I’d say [Trump] exposed the rhetoric against him.”

Flynn conceded that he believed at least one Democratic candidate posed a potential threat to Trump’s reelection. “If Bernie Sanders got [the nomination], I’d start to sweat,” he said. But he argued the chances Sanders — who was leading in polls before Biden entered the race — would win the nomination were slim. Regardless of who emerges from the Democratic primaries, “I’m not as worried as I was about Clinton” in 2016, he said.

As for Biden? “If you look at his rallies,” Flynn said, “he could barely fill an elementary school.”

To the contrary, Biden has drawn sizeable crowds to his campaign events so far, including the rally he held Saturday at a park in downtown Philadelphia. Ahead of the event, the Biden campaign announced that it would house its national headquarters in the city, in a nod to Biden’s ties to the region, its historical role in the nation’s founding, and Pennsylvania’s modern importance as a critical swing state.

At the rally, Biden argued that the political discourse under Trump was “ripping us apart at the seams” and promoting division instead of bipartisan problem-solving in Washington.

“Our politics have become so mean, so petty,” Biden said, adding that uniting the country and restoring “the soul” of the nation were two of the main reasons he decided to mount a third White House bid. 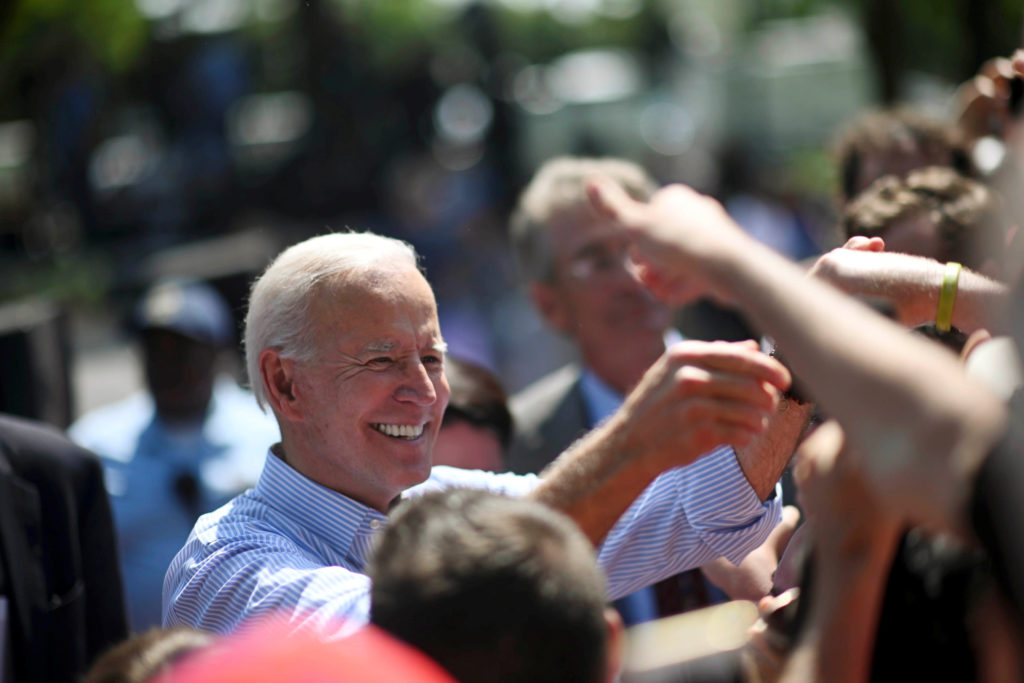 Democratic 2020 presidential candidate and former Vice President Joe Biden greets supporters after speaking during a campaign rally in Philadelphia, Pennsylvania, on May 18, 2019. Photo by REUTERS/Mark Makela

Biden also went after Trump in personal terms. He called Trump the “divider in chief” at one point, and said later that the president inherited a strong economy from former President Barack Obama and himself, “just like he inherited everything else in his life.”

The former vice president and senator did not put forth specific policy prescriptions to tackle the country’s problems, which he said included addressing climate change, creating more jobs and lowering the costs of college tuition.

Democrats who turned out to see Biden speak had a mixed reaction, and some said they were not convinced he was the party’s best chance to defeat Trump in 2020. Few were interested in discussing Biden’s message about national unity; the going concern was who would emerge from the primaries, and which candidate could win a general election.

When asked if Biden’s anti-Trump message would be enough on its own to secure the nomination, John Bernal, a former Clinton administration official who was at the rally, did not hesitate. “No. He’s got to stand on his own policies, [and show how] they differ from Trump.”

Few supporters at the Biden rally were interested in discussing his message about national unity; the going concern was who could win a general election.

Nevertheless, Bernal, who is supporting Biden, said the veteran politician still had plenty of time to flesh out his platform. Bernal, who is 71, also dismissed concerns about Biden’s age.

At 76, Biden is the second-oldest Democrat in the race, behind Sanders, and would be the oldest person ever to win the White House. Biden would beat the record Trump set in 2017, when he took office at 70.

Others felt that Biden’s age would be a factor in the Democratic race, which features a number of candidates who are several decades younger than Biden. “Naturally his age is what you think about,” said Blake Goodman, 20, who is backing Biden in the primaries. “But I’m confident he’s going to prove to the American people that he’s with it enough and still sharp.”

Biden’s experience in Washington was an asset, not a liability, said Beth Birmingham, a professor at Eastern University in St. Davids, a suburb of Philadelphia. Biden has “a level of gravitas that we’re sorely lacking in Washington and the White House these days,” Birmingham said, adding, “at this point we’re desperately in need of experience.”

But Birmingham and other committed Biden supporters declined to say how confident they were Biden could win the nomination, or beat Trump in a general election. And some Democrats at the rally said they were still considering their options before deciding who to back in the primaries.

Dorothy McCain, a small business owner in Philadelphia, said Biden was in her top three choices. The others? Sens. Kamala Harris of California and Elizabeth Warren of Massachusetts. Having so many women and people of color run for president was important, and sends a message about “where we’ve come as a nation,” said McCain, who is black.

But McCain said while race and gender matter to her, electability was the most important factor. If the primaries came down to Harris and Biden, she said, “I want the best,” whoever that may be.

Left: President Donald Trump reacts to supporters after speaking at campaign rally in Montoursville, Pennsylvania, on May 20, 2019.  Photo by REUTERS/Carlos Barria