What’s become of Trump’s voter fraud commission? Even some of its members aren’t sure

President Donald Trump’s voter fraud commission is facing mounting criticism from Democratic members on the panel who have questioned the group’s purpose and claimed they don’t even know when the group will meet next.

Several Democrats on the Election Integrity Commission said the work has stalled, and internal communication has slowed to a trickle since the panel held its first meeting in July.

“The reality is, I don’t know anymore now than I knew three months ago,” said Alan King, a probate judge in Alabama and one of the commission’s Democratic members.

The panel held its second meeting last month in New Hampshire, and Kansas Secretary of State Kris Kobach, the commission’s vice chairman, told the NewsHour the panel is in the process of planning its next meeting.

“There will be another meeting in the next few months,” Kobach, a Republican, said in a phone interview Monday. Kobach said no date has been set for the meeting.

Asked if he was aware of plans for the next meeting, King said: “No, and that was news to me. I haven’t received information one way or another.”

Mr. Trump established the commission by executive order in May, after his unsubstantiated claim that “millions of people who voted illegally” cost him the popular vote in the 2016 presidential election. But voting rights advocates have argued all along that the commission’s real purpose is voter suppression and propping up Trump’s false claims about widespread voter fraud.

Dunlap told the NewsHour that since the commission’s meeting in September, “it’s really been complete silence,” with the exception of the notice Kossack sent about the death of David Dunn, one of the panel’s Democratic members.

Dunn, a former Arkansas state legislator, died during a surgery earlier this month at age 52. His death left the commission with four Democrats and seven Republicans. 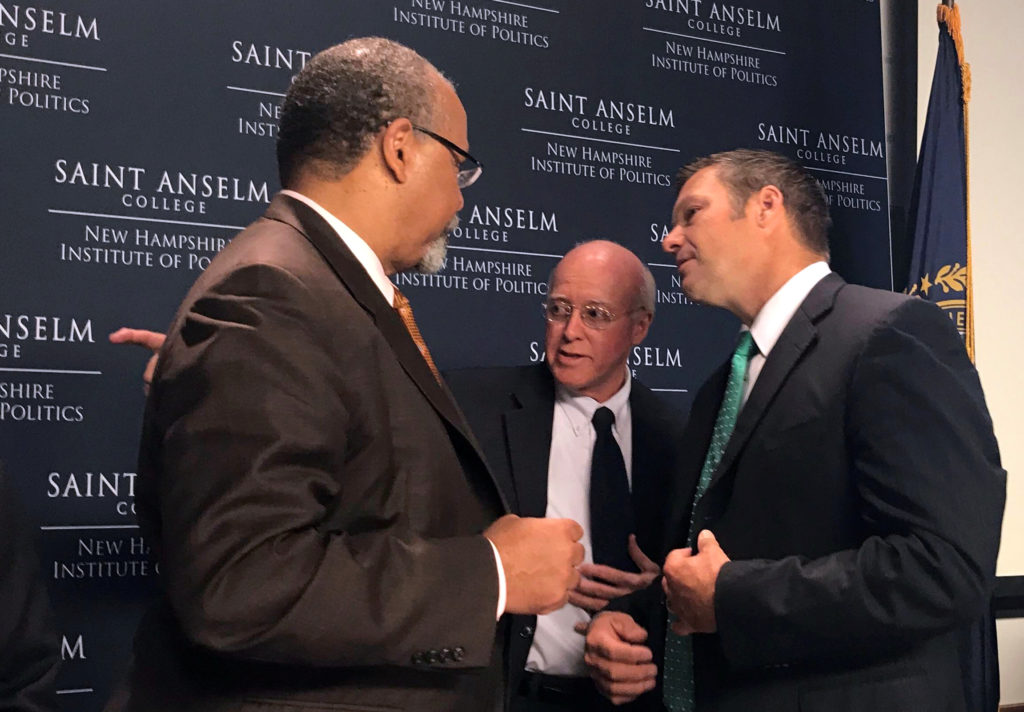 In his letter to Kossack, Dunlap claimed the panel has excluded some Democrats from its work. “It has been made manifestly clear that there is information about this commission being created and shared among a number of parties, though apparently not universally,” Dunlap wrote.

Kossack defended the panel in a statement to the NewsHour. “Members of the commission have been consistently kept abreast of its work. We hope members will continue to productively participate in the review process rather than engage in partisan attacks in the press,” Kossack said.

Kobach also pushed back on the criticism, telling NewsHour that he didn’t “know what [Dunlap is] talking about.”

“I’m not aware of any information or discussions or exchange of materials from commission members that would exclude” Dunlap, Kobach said. He declined to comment on the commission’s progress or any new election-related findings it may have reached.

“Any findings would be announced at the meetings. We don’t really release updates between meetings,” Kobach said.

Kobach’s comments come as some members of the commission had started questioning whether it would hold a third meeting at all.

The panel has faced controversy from the start, with Dunn’s death just the latest setback. Earlier this month, a staffer was arrested on charges of possessing child pornography.

A number of outside groups have filed lawsuits over the panel’s controversial request that states hand over sensitive voter information and data. Some of the complaints have also taken issue with the panel’s compliance with federal transparency and open meetings law.

Inside the commission, there were few signs this week that Democrats would tamp down their frustration. “I haven’t seen anything so far that can lead this part-time commission to make any sort of recommendations that have any substance,” King said.