House Republicans are slated to vote Thursday on their bill to repeal and replace the Affordable Care Act. The floor vote is the culmination of weeks of negotiation within the House GOP caucus to bring reluctant members on board. In March, Republican leaders canceled a vote on a version of the bill after failing to secure enough support from conservative and moderate members alike.

But now GOP leaders say they’re confident the bill will pass. Supporters say it would cut federal health care spending, improve care and offer patients more choice. Opponents say it would gut a law that has expanded coverage to millions of people. Earlier this year, the Congressional Budget Office estimated that the bill would cause 24 million Americans to lose their health insurance by 2026.

Here’s a look at what’s inside the bill, including two recent amendments added at the last minute to help get it over the finish line:

The bill would repeal the subsidies under the Affordable Care Act, or Obamacare. The subsidies are based on income and regional differences in health insurance costs. Roughly 83 percent of the 12.7 million people who get their healthcare insurance through the Obamacare exchanges receive subsidies that help pay for the coverage, according to the latest federal data. Currently, individuals earning under $47,500 and families of four making under $97,200 are eligible for subsidies under the law. The House bill would eliminate those subsidies beginning in 2020.

The bill would also eliminate a separate set of subsidies under Obamacare that help cover the out-of-pocket health care costs for individuals earning under $30,000 per year. This would also kick in in 2020.

The bill would allow states to seek waivers from two important provisions in Obamacare: A rule that requires insurance companies to offer essential benefits in their plans; and a provision that bars insurers from charging people with pre-existing conditions more money than healthy people.

Insurance companies under Obamacare are required to cover essential benefits, including preventative care, mental health care, maternity care, hospitalization and prescription drug costs, among other services. Under the House bill, insurers could sell plans that don’t include those services.

Insurers could also charge higher rates for people with pre-existing conditions if they lose their coverage. But states would be required to provide protections, like “high-risk” pools, to help offset the extra cost. (While the bill would weaken the protections for people with pre-existing conditions, it leaves in place another popular part of Obamacare: a requirement that allows children up to the age of 26 to stay on their parents’ health insurance plans).

The bill includes $130 billion in assistance for sick people who would see their premiums rise. The funding would help cover out-of-pocket costs, preventative services, maternity care, mental health, and other services. The bill would also include an additional $8 billion in funding for high-risk pools over five years, thanks to an amendment drafted by Republican Reps. Fred Upton (R-Mich.) and Billy Long (R-Mo.) that was added to the bill on Wednesday. A separate amendment by Rep. Tom MacArthur (R-N.J.), which was added to the bill last week, would give states greater flexibility in seeking waivers from Obamacare’s pre-existing conditions requirement. 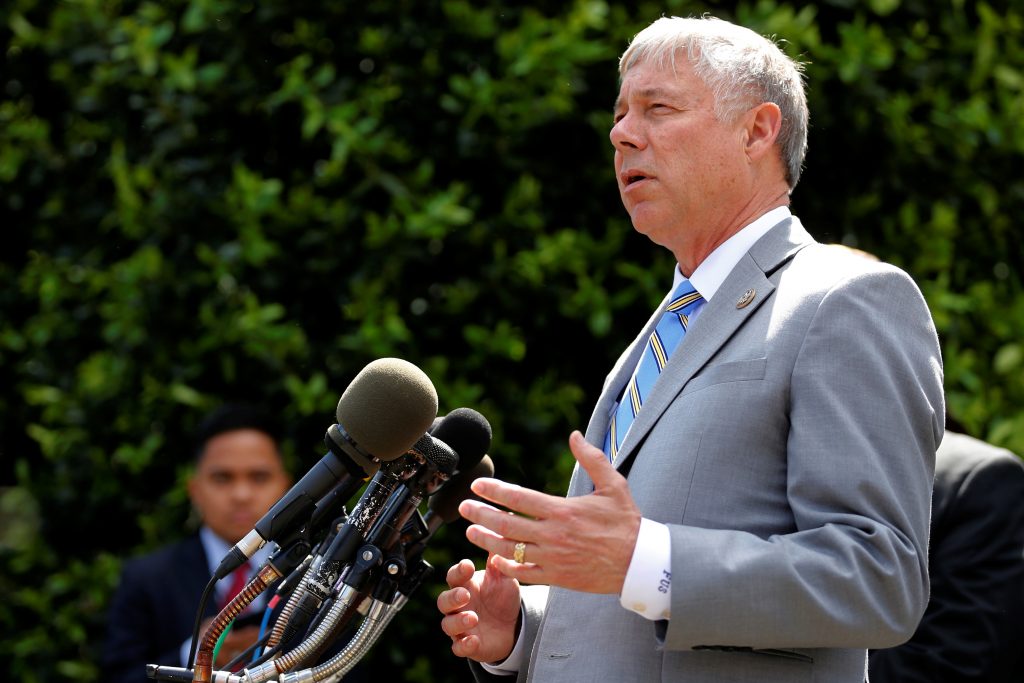 Rep. Fred Upton (R-MI) speaks to reporters about health care legislation after meeting with President Trump at the White House on May 3, 2017. The GOP bill included an amendment by Upton and Rep. Billy Long (R-MO) that provided additional funding for high-risk pools. Photo by REUTERS/Jonathan Ernst

The bill would repeal an Obamacare care mandate that all Americans have health insurance, or pay a tax. The bill would also eliminate a requirement that large employers — with 50 or more workers — offer health insurance. Both of these changes are retroactive to 2016, meaning they would go into effect immediately.

The bill would replace the individual and employer mandates with a new provision that would let insurance companies raise premiums by 30 percent for anyone who goes without health coverage for 63 days. Insurers could levy this continuous care surcharge for one year.

The House bill would transform Medicaid’s funding formula. Medicaid is an income-based program funded by the federal government and states. The bill would create a per-capita cap on federal Medicaid spending, by giving states a set amount of funding for each person enrolled in the program. States could also choose to receive a block grant, which would provide a fixed amount of Medicaid funding that wouldn’t change based on the number of people enrolled.

The bill would also end the Medicaid expansion put in place under Obamacare, which offered additional federal funding to states that enrolled more people in the program. The provision would take effect starting in 2020, meaning that states that expanded Medicaid under Obamacare would stop receiving the extra federal funding at the end of 2019. States that opted out of the expansion would become immediately ineligible to receive the enhanced federal match.

Eliminates taxes on the rich

The law would repeal two taxes that were included in Obamacare to help pay for the overall expansion of health coverage to middle and lower-income Americans. The first is a 0.9 percent Medicare payroll tax; the second is a 3.8 percent tax on investment income. Both taxes apply to individuals earning more than $200,000 per year, and married couples who file their tax returns jointly and make more than $250,000 per year. The combined cuts would give $274 billion to the wealthiest 2 percent of Americans. The bill would also repeal Obamacare taxes on health insurance companies, medical device makers, and drug companies.

The bill would increase the annual amount of money that individuals and families can contribute to their Health Savings Accounts, known as HSAs. The new contribution limits for individuals would be $6,550, and $13,100 for families. (The current limit is $3,400 for individuals, and $6,750 for families). The bill would also lower the tax penalty for people who use money from their HSAs to pay for non-medical expenses. The penalty would be 10 percent, down from the current level of 20 percent. The changes to the HSA contribution limits and the tax penalty would take effect in 2018.

Left: Speaker of the House Paul Ryan smiles as he departs a meeting at the U.S. Capitol before a vote to repeal Obamacare in Washington, D.C., on, May 4, 2017. Photo by REUTERS/Kevin Lamarque