What’s next in the fight against Keystone XL and Dakota Access pipelines?

Hours after President Donald Trump signed executive actions Tuesday to clear the way for the construction of the Dakota Access and Keystone XL oil pipelines, a throng of demonstrators gathered outside the White House to renew their fight against the once-blocked oil pipelines.

It was one of several rallies organized across the country yesterday to protest the president’s actions, the latest chapter in a years-long battle over where and how America adds to its pipeline network.

As they gathered in a handful of cities from New York to Seattle, organizers of the movement, like Jordan Marie Brings Three White Horse Daniel, wondered: Where do we go from here?

“I was heartbroken, but it was something I expected,” said Daniel, 28, who has been involved in organizing pop-up rallies and protests in D.C. since last summer. “But did I think it would happen this soon? No,” she added.

The Indigenous Environmental Network’s Dallas Goldtooth told the NewsHour on Tuesday there is going to be a unified call to action by various groups on the ground across the nation in the coming weeks.

What happened at Standing Rock has ignited a fire in all of us, Goldtooth said.

Trump promised during the 2016 campaign that he would act on the Dakota Access and Keystone XL pipelines. With Tuesday’s executive actions, Trump revived the Keystone XL project, which was mired in debate for years until former President Barack Obama officially rejected the pipeline proposal in 2015.

Trump also wants to expedite the environmental review of the Dakota Access pipeline. Before the president’s new actions, the Army Corps of Engineers halted a section of the pipeline that’s adjacent to the Standing Rock Indian Reservation to investigate alternate routes.

“I am to a large extent an environmentalist. I believe in it, but it’s out of control,” Trump told a group of U.S. automaker executives, the same day he issued those pipeline actions.

Daniel, a D.C. resident and member of the Lower Brule Sioux Tribe, vowed to remain a thorn in the president’s side.

By reviving the stalled pipelines, Trump “is committing an act of environmental genocide on indigenous people and everyone along the waterways that the pipelines will affect,” she said.

Trump has maintained that Keystone XL pipeline, in particular, would create jobs, although how many exactly is in dispute. Yesterday, Trump said the Keystone project would support 28,000 jobs, Valerie Volcovici of Reuters told the NewsHour.

The Dakota Access Pipeline and Keystone XL Pipeline were put on hold during the Obama administration. But new executive orders by President Trump begin putting them back on track, as part of efforts to undo former President Obama’s legacy. How do these moves fit into the broader Trump agenda for energy and the environment? William Brangham talks with Valerie Volcovici of Reuters.

A 2015 assessment from the State Department estimated, however, that that number was closer to 42,000 temporary jobs over two years — but only 35 permanent ones.

“Most of those jobs are far from the construction site, and it’s hard to argue they are new,” the Post’s Glenn Kessler wrote.

“It’s not enough to march for one day” 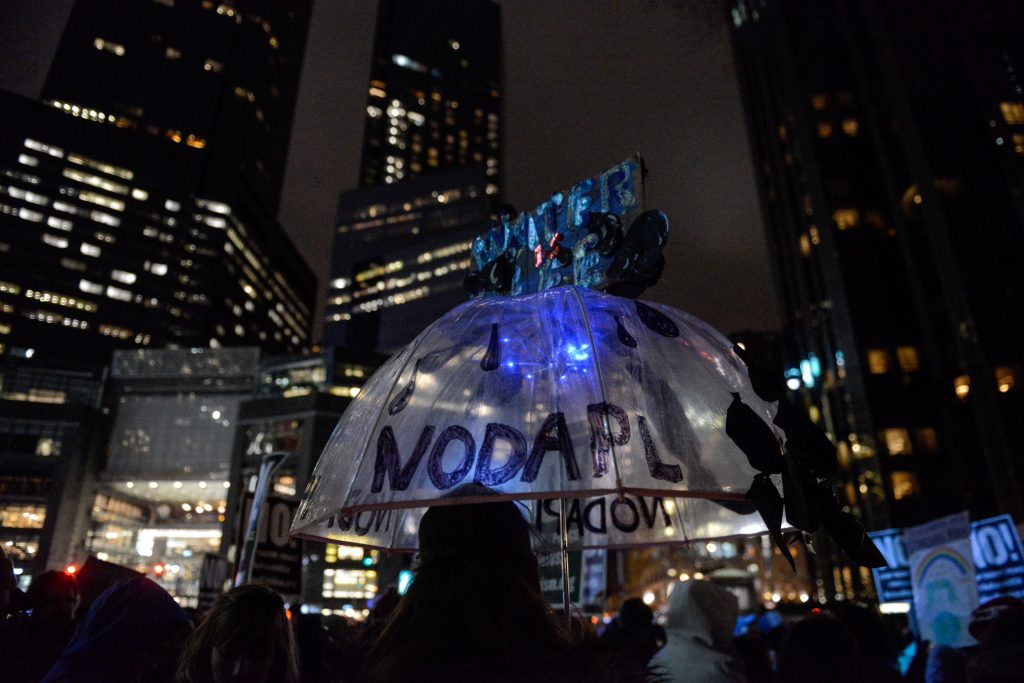 People participate in a protest against President Donald Trump’s executive order to allow the Keystone XL and Dakota Access pipelines in New York on Jan. 24, 2017. Photo by Stephanie Keith/Reuters

The answer to the president’s actions is to keep mobilizing and “being a voice and a presence,” Daniel said.

“We want you to disrupt business as usual,” one of Tuesday’s rally leaders said, adding that the fight against these pipelines and those elsewhere in the U.S. extended beyond the flash point in Standing Rock.

As NewsHour’s Mark Scialla reported, the standoff between law enforcement and water protectors over the Dakota Access pipeline in Cannon Ball, North Dakota, became a blueprint for other pipeline battles in the U.S. Environmental activists, largely led by indigenous folks, hope to widen the scope of pipeline resistance to other states like the Trans-Pecos Pipeline in Texas or the Northeast Access Pipeline in Massachusetts, among others. 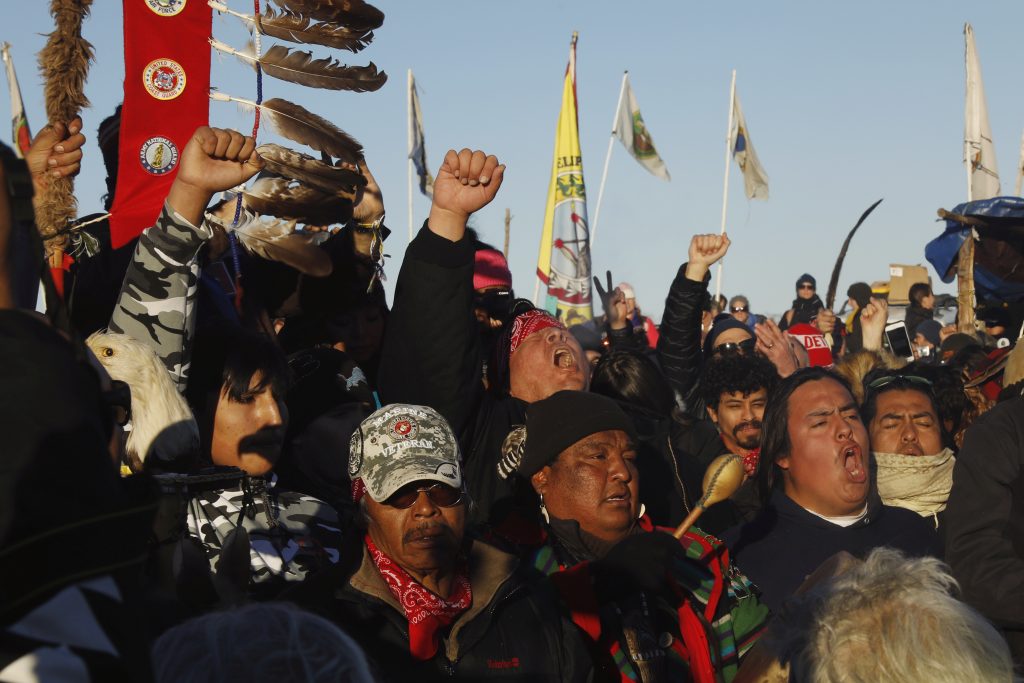 Native American “water protectors” and their allies celebrate that the Army Corps of Engineers has denied an easement for the $3.8 billion Dakota Access Pipeline near Cannon Ball, North Dakota, on Dec. 4, 2016. Photo by Lucas Jackson/Reuters

Part of the message to the crowd Tuesday at the D.C. rally was using the momentum of Saturday’s Women’s March to create “hard, tangible” actions in the fight against the pipelines.

“I think what the Women’s March did was create more movement and it’s making us stronger, making our voices louder … and giving me a lot of encouragement that there are people with me,” said Ani Begay, 37, a member of the Navajo Nation.

Felicia Teter, a member of the Yakama Nation, who said she was not surprised by Trump’s actions, said, “It’s not enough to march for one day.”

Her message to people who marched Saturday was to “continue learning, continue talking to communities of color … and then turn this anger into action.”

“There have been people who have been fighting for their entire lives already, and now it’s time for everyone who’s just waking up to this to stand up for them because we’ve been waiting,” the 26-year-old said.

Holding up “Water Is Life” and “People over pipeline” signs, the group of indigenous and climate activists in D.C. Tuesday were determined to prove that they can help stop the pipelines under Trump, as they did under his predecessor.

Other signage — “Science is real” and “Science not Silence” — could be seen among the demonstrators. Trump once tweeted that climate change was a hoax.

Trump’s actions are also seen as a direct dissolving of the Obama’s environmental legacy, all part of “his economic vision,” Volcovici said.

Trump “sees an all-of-the-above energy strategy, with a very heavy focus on fossil fuels,” she said. “The environmental gains of the Obama administration were seen as an impediment to those goals,” she added.

It was also revealed during election year that Trump owned between $15,000 and $50,000 in stock in Energy Transfer Partners, the builder behind the Dakota Access pipeline. In December, Trump spokeswomen Hope Hicks said Trump sold his shares in the company, but no documentation was provided to confirm the sale.

Left: Opponents of the Keystone XL and Dakota Access pipelines hold a rally as they protest President Donald Trump's executive orders advancing their construction, at Lafayette Park next to the White House in Washington, D.C., on Jan. 24, 2017. Photo by Saul Loeb/AFP/Getty Images