Romney Country, Bachmann Land, Paul-topia: Where the GOP Field’s Money Comes From, What it Means 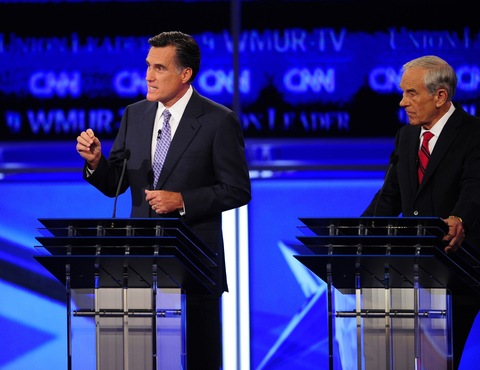 Saying you like a candidate is one level of support. Putting a sign in your yard is a bit more. But when your support turns into dollars, ah, there’s the real vote of confidence.

So with the almighty dollar as a guide, what do the various bases of the top Republican contenders look like? Let’s take a look at the financials of the top finishers in Iowa’s straw poll.

Sorting through the second quarter individual donations in for the top declared presidential candidates, Patchwork Nation is beginning to get a sense of the contours of Romney Country, Bachmann Land and Paul-topia. (Texas Gov. Rick Perry had not yet declared by this filing, so there was no national contributor base to check.)

Individual contributions are only one way of giving, of course. Last year’s Supreme Court ruling on campaign donations opened the door to unlimited giving to political actions committees. But individual gifts remain a measure of voter support for particular candidates.

There is a bit of overlap – contributions always follow wealth and some of Patchwork Nation 12 county types are better off than others – but look closely and some trends begin to emerge. Later in the week, we’ll do a comparison with President Obama’s financial numbers, but we now look at the Republicans in comparison to each other.

Going by sheer dollars, former Gov. Mitt Romney crushed his competitors in overall donations in the second quarter — about $18 million versus $4.5* million for his nearest challenger, Paul. Romney has held a consistent lead over his opponent in donations and the quarterly numbers are no different. But a few things stand out about what communities are giving to him. Take a look at the map below and you’ll see the darkest greens packed around the biggest metro areas.

Those are good places to have a fundraising base for any politician since those two county types are the richest in Patchwork Nation. They are also, however, not particularly strong bases of Republican votes and as the 2012 primary season draws closer that is worth noting. Romney may be able to get his dollars from there, but he may need to get his votes from somewhere else.

One primary season positive for him though, the first primary state, New Hampshire has a lot of dark green in it. There are a few reasons for that. Romney was governor of neighboring Massachusetts. And New Hampshire also has a lot of Monied Burbs, four out of its 10 counties and the most densely populated ones.

And, no surprise, he does very well in the Mormon Outpost counties, which make up about 4 percent of his total.

Rep. Ron Paul might look at his map of donations and argue it’s not the shade of green that matters, but rather how much green there is overall. His donation “base of support” is wider than Romney’s — more evenly spread out across Patchwork Nation’s 12 county types. (That’s not including the $2.2 million that was un-itemized and could be anywhere. Paul’s donations were almost evenly split between itemized and un-itemized in the second quarter.)

The fact that Paul outraised Romney in those places may speak to Paul’s strength in those less metropolitan areas, or Romney’s weakness in them or both. Regardless, it is significant because those two county types hold some of the most committed Republican voters.

If Patchwork Nation were grading the Republican candidates listed here by donation amounts, Rep. Michele Bachmann would receive an incomplete. In the second quarter she received some $1.6 million in contributions, but only a third of those receipts were itemized — larger donations listed with names and occupations attached to them. The rest, about $1 million, were small un-itemized donors. So it is hard to get a grasp of her real donation base in Patchwork Nation’s county types.

But, looking at the numbers we do have, some trends crop up. A larger percentage of her money came from Boom Town counties than either Romney or Paul. Why is that significant? As we have noted in more in-depth reportage, those Boom Town counties were hit hard in the housing crunch and seem to be a big base of support for the Tea Party movement.

Look on the map below and you’ll notice one of her darkest-green areas is Clark County, Nev., a Boom Town that has been decimated by the troubles in the housing industry and a hotbed of Tea Party activism. Her haul there is even more than she received from any of the counties in her home district in Minnesota.