The White House said today that it is “sad” that the mayor of San Juan has continued to criticize the Trump administration for its response to hurricane relief efforts in Puerto Rico.

San Juan Mayor Carmen Yulin Cruz has heavily criticized President Donald Trump’s visit to survey damage from Hurricane Maria in Puerto Rico, including on PBS NewsHour’s program Wednesday night, saying the meeting between Trump and local leaders “finally put into perspective the disconnect between what [the White House staff is] hearing and what is actually happening, what they think should happen and what is actually taking place.”

“So, he can attack me all he wants. Bring it on. I’m here,” Cruz told the NewsHour . “As long as it gets the message out that we are thirsty, that we are hungry, that we need supplies.”

White House press secretary Sarah Huckabee Sanders said during today’s briefing that by criticizing the Trump administration so strongly in the press, Cruz “chose to make that a political statement instead of a time of focusing on the relief efforts.”

The federal response in Puerto Rico continues to draw criticism from locals, their dissatisfaction amplified by President Trump’s visit to the island on Tuesday.

Sanders said Cruz had the opportunity to air some of her concerns during a meeting between White House staff and local officials during the president’s trip. Sanders continued:

“[The president] specifically asked in the meeting where many were present, including a couple dozen other mayors who were very happy with the recovery efforts — the governor, the congresswoman. He opened the floor up for discussion, and she actually made zero comments. To me, that would have been the time and the place that she should have weighed in and asked for what she needed, and laid out what she was asking for for San Juan. She didn’t.

Instead she chose to wait until the President left and then criticize him on TV, which I think is the wrong thing for her to do for her constituents. And I hope next time she’s given the opportunity to help her constituents, she’ll take it.”

Cruz also wore a “NASTY” black tee in an interview with Univision on Wednesday, a day after the president’s visit to the island. The shirt appeared to reference Trump’s tweets over the past weekend.

“The Mayor of San Juan, who was very complimentary only a few days ago, has now been told by the Democrats that you must be nasty to Trump,” he tweeted. 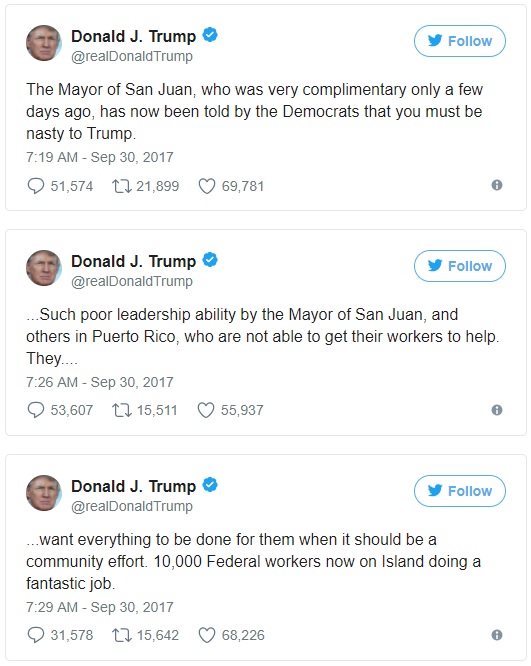 He later tweeted that Cruz exemplified “poor leadership,” adding that the mayor and others in Puerto Rico “want everything to be done for them when it should be a community effort.” For her part, Cruz said Trump was a “miscommunicator-in-chief,” adding that the president’s trip to Puerto Rico was “insulting.”