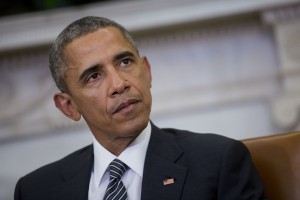 WASHINGTON — The White House threatened Wednesday to veto a Republican bill to overhaul the widely criticized No Child Left Behind law, calling the effort “a significant step backwards.” The veto threat came as lawmakers were set to debate the measure in the House.

Republicans say the bill would restore local control in schools and stop top-down education mandates. Democrats say it would allow billions in federal dollars to flow out without ensuring they will improve student learning.

The White House said the bill “abdicates the historic federal role in elementary and secondary education of ensuring the educational progress of all of America’s students, including students from low-income families, students with disabilities, English learners, and students of color.”

The White House statement was the latest in a series of veto threats issued by President Barack Obama since both chambers of Congress went under Republican control last month.

A vote is expected on Friday, and it’s possible that members will vote strictly along party lines. That’s what happened with a similar bill in 2013.

House Speaker John Boehner, R-Ohio, called the education measure “a good conservative bill that empowers America and does not empower the bureaucracy here in Washington.”

The bill maintains annual federal testing requirements. It consolidates or eliminates many federal programs, creates a single local grant program and allows public money to follow low-income children to different public schools. It would also prohibit the federal education secretary from demanding changes to state standards or imposing conditions on states in exchange for a waiver around federal law.

The bipartisan law President George W. Bush signed in 2002 sought to close significant gaps in the achievement of historically underserved group of students and their more affluent peers. It mandated annual testing in reading and math for students in grades three to eight and again in high school. Schools had to show student growth or face consequences.

No Child Left Behind required that all students be able to read and do math at grade level by 2014. The Obama administration in 2012 began allowing waivers around some of the law’s more stringent requirements if schools agreed to certain conditions, like using college- and career-ready standards such as Common Core.

House Republican leaders view the bill as a way to show their opposition to the Obama administration’s encouragement of the Common Core state standards. The standards have been adopted in more than 40 states and spell out what English and math skills students should master at each level. They have become a political issue in many states because they are viewed by critics as a federal effort even though they were developed by U.S. governors.

In the Senate, there appears to be more of a bipartisan effort to fix the law. Sen. Lamar Alexander, R-Tenn., the chairman of the Senate Committee on Health, Education, Labor and Pensions, and the committee’s senior Democrat, Sen. Patty Murray, D-Wash., have said they were working together on a proposal. Alexander said this week he wants to get a bill to the full Senate in March.