White House Counsel Kathy Ruemmler said Tuesday it is “ridiculous” for Republicans in the Senate to continue to block confirmation of 17 of President Obama’s nominees to fill federal district court vacancies. She said the vacancies are resulting in unnecessary delays in court cases around the country. 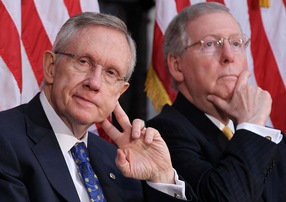 Ruemmler said the White House supports Senate Majority Leader Harry Reid’s move to schedule cloture votes on each nomination — requiring at least 41 of the Senate’s 47 Republicans to vote no if they want to want to continue to prevent final action on the nominees.

Senate Republicans contend that with a vacancy rate of only 10 percent, there’s no emergency on the federal bench, and they reject Democrats’ charge that former President Bush’s judicial nominees were confirmed by the Senate at a faster pace than Mr. Obama’s.

But that cooperation was put in jeopardy in early January when President Obama bypassed the Senate to make a recess appointment of Richard Cordray to lead the new Consumer Financial Protection Bureau. Republicans had delayed a vote on Cordray, saying they wanted changes to the way his agency was structured under the financial reform law, which, along with the new health care law, is a signature piece of the president’s legislative record.

In a conference call with reporters, Ruemmler said women and minorities are heavily represented among the stalled nominees. She said the president has appointed more African-Americans, Hispanics, women and gays to the federal bench than any of his predecessors.

She said there are 22 judicial nominees outstanding. The White House and Senate Democrats are pushing for immediate action on the 17 who are up for lifetime appointments to district courts. The remaining five are nominees to appeals courts — the level just below the Supreme Court — where nominees get a higher level of Senate scrutiny.

A cloture vote on the first nominee could come Wednesday.