Why Did So Many Democrats Lose? Some Districts Were Never a Good Fit 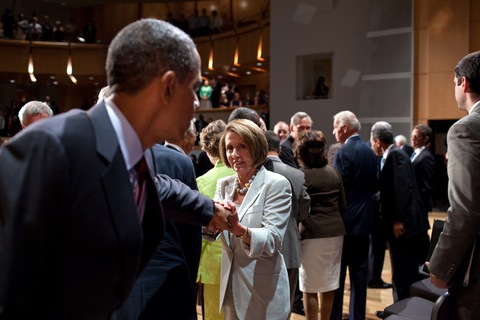 As the Democrats sort through the wreckage of Tuesday night, the question “what just happened?” is undoubtedly running through their minds. Was it Tea Party enthusiasm that buried them or anger at the economy or a loss of faith in President Obama? Or maybe all those things.

An analysis of the results through Patchwork Nation’s breakdown of nine different types of congressional districts offers some answers.

More than half of the GOP pickups in the House came in just two district types: the 56 Booming Growth districts and the 52 Christian Conservative districts. The Republicans captured 31 seats in those districts so far — not all results are final yet.

That’s an impressive set of gains. But looking at them closely reveals how dangerous it can be to ascribe a large broad meaning to a national election that is essentially “about” different things in different places. Knowing what Patchwork Nation knows about these districts — their demographic economic specifics — suggests the vote in them was pushed by different drivers.

Gains the GOP made in other types of districts are much more in line with what one might expect to see in a midterm election. That’s nothing for Democrats to cheer about, but when you dig into the places they lost badly, the 2010 returns certainly don’t look shocking.

As Patchwork Nation has noted for weeks, the districts we call Booming Growth — places that experienced the heights of the housing boom and now the depths of the foreclosure mess – were ripe to be fall hard to the Republicans and they did. In recent weeks we wrote about how these districts in particular were hotbeds for tea party meetups.

If anger was driving the electorate in these places, it was foreclosures that seemed to be driving the anger and for good reason. Foreclosures are an incredibly disruptive force in a community. Even the houses that are not foreclosed upon feel the impact as their values fall.

Districts that fall into this category include Nevada’s 3rd around hard-hit Las Vegas, where incumbent Democrat Dina Titus lost her seat as well as Florida 24, where Suzanne Kosmas lost and North Carolina 2, where Bob Etheridge went down.

The Booming Growth districts were reliably Republican back in 2004, but they swung to the Democrats heavily in the last two elections before Tuesday. In 2010, these districts were evenly divided — 27 for Democrats and 29 for Republicans.

That breakdown post-Tuesday is 43 for the GOP and only 12 for the Democrats, with one still undecided. One could easily argue these are the seats the Tea Party and voter anger won for the Republicans.

But the other set of districts that were big wins for the GOP, Christian Conservative districts, look a little different.

Patchwork Nation’s foreclosure data showed there were very few foreclosure problems in these districts. And they had the lowest number of tea part meetups over the last six months of any congressional district type.

These districts were never good fits for the Democrats. They are full of strong cultural conservatives — more than two-thirds of the voters in these districts identify themselves as born-again Christians — and were only represented by their Democratic representatives because the 2006 and 2008 elections were so good to the Democratic Party.

In short, these Christian Conservative districts were never really safe seats for the Democrats. They were just on loan and on Tuesday the bill collector came to the door.

On Tuesday morning these somehow evenly split between the parties — 25 Democratic and 27 Republican. No more. The GOP now holds 44 of these 52 seats.

The Democratic Party also had a hard time in the 17 districts we call Small Town America – largely rural, not wealthy and not populous. The GOP picked up five seats there and now holds 15 of the 17. These places, again, are socially conservative and philosophically poor fits for the Democratic Party – places like Michigan’s 1st District.

But the Republican pickups in other types of district look a little more like a normal set of midterm wins for the out of power party.

The GOP has so far picked up seven seats in the 82 politically moderate Established Wealth districts. The party picked up 10 seats in the 104 broad, middle-class Shifting Middle districts and it flipped three seats in the 36 family-filled districts we call the Young Exurbs.

In a lot of those districts the Republican are likely do to a combination of factors including the sour economy and the much-noted older/white 2010 voter turnout.

The real question out of the 2010 campaign is what exactly does the current congressional blue/red map represent? A new normal? Another in a series of voter swings over the past three elections?

The Patchwork Nation breakdown suggests the Democrats should be prepared to say goodbye to some of these seats for quite some time. Their losses were about districts that were bad fits.

In others though, the victories and losses in the great red/blue war may be more transitory — about the economy or foreclosures or just the nation’s dour mood. Two years from now both parties will probably be fighting hard for them.