Why many voters in Sanders’ old Brooklyn neighborhood are backing Trump

BROOKLYN, N.Y. — Senator Bernie Sanders of Vermont should not count on Reiza Tsinman’s vote. Or Misha Lazarev’s, for that matter.

Tsinman and Lazarev are Jewish immigrants from former Soviet bloc countries, and neighbors on the floor of the Brooklyn apartment building where Sanders, a self-described “democratic socialist,” grew up. Neither is a Sanders fan.

“I lived under socialism, so I know what that is,” said Tsinman, 81, who moved to the United States from the former Latvian Soviet Socialist Republic. Sanders is “talking about free healthcare and free education,” Tsinman said. “Where is all that money coming from?”

Lazarev, a native of Bobruysk, Belarus, said that he plans to vote for Donald Trump if the Republican front-runner makes it to the general election.

“I like Trump. He’s a builder, [and] Trump says what people want to hear,” Lazarev, 75, said in an interview in his apartment. Sanders, Lazarev said, “can’t win.”

As Sanders battles former Secretary of State Hillary Clinton for the Democratic presidential nomination, his focus on income inequality and campaign finance reform has attracted a devoted following among liberal primary voters across the country.

But here on Sanders’ childhood turf in the Midwood section of Brooklyn, voters seem skeptical and dismissive of the senator, despite sharing a similar cultural background and upbringing. 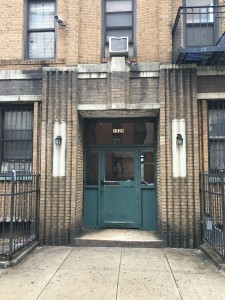 Bernie Sanders grew up in this apartment in the Midwood section of Brooklyn. Photo by Daniel Bush

Sanders, who is Jewish, and his brother Larry, were raised by their mother and Polish-born father in a small apartment on the second floor of 1525 E. 26th St. When Sanders was born in 1941, the brick, six-story building was filled mostly with first and second-generation immigrant Jewish families from Eastern Europe, census records show.

Now, 74 years later, the building, with its faded marble floors and beige stucco walls, is still home to a mix of immigrants from the former Soviet Union, along with a growing number of Hispanic families.

An ad posted by a local handyman inside the front entrance reminds tenants to call for help on the Sabbath, when observant Jews are prohibited from doing work.

The market-rate rent for Lazarev’s one-bedroom apartment, which he shares with his wife, was roughly $1,300 per month, he said. Their unit, which is heavily subsidized through a federal Section 8 housing voucher, is likely similar in size to the apartment the Sanders family occupied across the hall.

At first glance, the building’s tenants would seem to be natural allies for Sanders.

But while several residents in the neighborhood who were interviewed for this story shared Sanders’ experience growing up in a lower-middle class family in post-World War II Brooklyn, they remain unmoved by his campaign.

In reality, Sanders is more popular with young, mostly white, non-native New Yorkers who live in Brooklyn’s toniest enclaves than he is in neighborhoods like Midwood.

Sanders has said his childhood was relatively happy, despite the fact that money was tight. He was a solid student and excelled at sports, starring in track and long-distance running at James Madison High School. (The school’s list of famous alumni includes Supreme Court Justice Ruth Bader Ginsburg, Senator Chuck Schumer of New York and Judge Judy.)

Upon graduating in 1959, Sanders enrolled at Brooklyn College and later transferred to the University of Chicago after his mother died at 46. He eventually moved to Vermont, where he started a political career that has been marked by a sharp focus on socioeconomic disparities.

But now that Sanders is running for president, his base of support in Brooklyn — which has more than 10 percent of the state’s registered Democratic voters — is concentrated outside of Midwood, in wealthier, more liberal and less religious communities that have undergone rapid gentrification in recent years.

Brooklyn’s modern-day political geography is an awkward fit for Sanders, 74, who often touts his humble outer borough roots on the campaign trail.

READ MORE: My lunch with a zero percent candidate

In reality, Sanders is more popular with young, mostly white, non-native New Yorkers who live in Brooklyn’s toniest enclaves than he is in neighborhoods like Midwood.

Feder runs a computer store in the neighborhood. He said that he’s a registered Democrat, but votes for Republican presidential candidates. If Sanders won the Democratic nomination, Feder said in an interview outside of the neighborhood public library, he would vote for Trump or Senator Marco Rubio of Florida.

Liberal voters in some parts of Brooklyn might admire Sanders, but in his neighborhood, people “look at it differently,” Feder said.

Not everyone is adamantly opposed. Michael Gonzalez, a 23-year-old bike messenger, is undecided, but considering voting for Sanders.

Sanders, he says, “believes in causes” and understands the issues, and he likes that.

“I lived under socialism, so I know what that is.”

Meanwhile, at a bagel shop on Kings Highway in Midwood, Jody Weiss, 62, took a break from her toasted everything bagel with cream cheese to explain why she isn’t supporting Sanders.

“I like the fact that he’s a Brooklyn boy,” said Weiss. “But the thing that scares me with Sanders is I heard he’s got a crazy plan to raise taxes.”

Weiss, who said that she was retired, voted for President Obama in 2012. She said she wants to vote for Trump this year if he becomes the Republican Party’s standard-bearer. “He’s got the balls to say what he wants to say.”

Weiss and other Jewish voters living in Midwood were also wary about the issue of Sanders’ religion.

Sanders hasn’t focused on his Jewish faith on the campaign trail. But earlier this month, when he won the New Hampshire Democratic primary, Sanders became the first Jewish presidential candidate to win a primary, touching off a debate about Judaism and politics that will only grow as the election moves forward.

“So far I haven’t seen any [anti-Semitism] towards Sanders, but it’ll come up eventually,” said Feder, who is Jewish. “In general, people don’t like Jewish politicians. If something goes wrong, they blame the Jews.”

Weiss admitted that it would be important for her to see a Jewish president in her lifetime, even if it was someone like Sanders who she doesn’t fully support. “It’s about time,” Weiss said.

Back in Sanders’ old building, Tsinman insisted that he couldn’t take her vote for granted on the basis of their shared religion.

“I know he’s Jewish. But he’s a socialist,” Tsinman said. “Religion doesn’t matter. It comes down to what someone is proposing.”