After Sen. Elizabeth Warren, D-Mass., and former Obama cabinet secretary Julian Castro signaled they’d run for president, they both chose the same location for one of their first campaign stops: Puerto Rico.

Both candidates used their January visits to criticize the Trump administration’s response to Hurricane Maria, which wiped out infrastructure and killed nearly 3,000 people after it hit in September 2017.

Residents and activists like Justo Méndez say they haven’t forgiven Trump for his initial visit to the island two weeks after Hurricane Maria. Trump famously threw paper towels into a crowd of hurricane victims, underplayed the death toll and damage — he tweeted at one point that the death toll “like magic” had grown to 3,000 people — and in the months that followed, repeatedly attacked Puerto Rico’s top elected officials after they questioned the federal government’s response to the disaster.

“It showed a lack of respect [and] cynicism,” said Méndez, a member of the San Juan-based community organizing group VAMOS Puerto Rico, which has helped with the recovery effort. “He was treating it as if it was a joke, ridiculizing the situation that Puerto Rico was living through. It provoked anguish and a sense of hopelessness.”

“We feel that Puerto Rico was treated with disdain, with prejudice and racism,” Méndez said.

The president has insisted economic growth on his watch has made him popular among Latino voters. In his State of the Union speech Tuesday, Trump cited record low unemployment numbers among African-Americans and Latinos (though, as fact checking organizations later pointed out, those numbers have risen since they reached record lows last year.)

Residents and activists say they haven’t forgiven Trump for his initial visit to the island two weeks after Hurricane Maria.

Last month, Trump tweeted about findings in a PBS NewsHour/NPR/Marist poll showing his support had gone up among Latino voters. But the president’s claim was misleading and overlooked the poll’s broader conclusion that a majority of Americans overall disapprove of his job performance.

By visiting Puerto Rico or just talking more broadly about cultural diversity, Warren, Castro and other Democratic contenders — including Sens. Kamala Harris of California and Cory Booker of New Jersey — have sought to contrast themselves with a president who often comes under fire for rhetoric that has been viewed by many as racist and discriminatory towards minorities and immigrants.

In her campaign visit to Puerto Rico last week, Warren took jabs at the administration’s hurricane response and made arguments for restructuring Puerto Rico’s $120 billion debt, a top political debate on the island.

“Puerto Rico has not been treated with respect,” Warren said in a speech in San Juan. “Even now, even after the Trump Administration has denied how many died and has dragged its feet on sending adequate disaster relief funds, the President of the United States has doubled down on the insult by toying with the idea of diverting your recovery funds to build a wall.”

Warren was referring to Trump’s dismissal of a Harvard study that estimated the death toll was in the thousands — significantly higher than 64, the administration’s official tally. The White House has also reportedly weighed using natural disaster funding to pay for the border wall, something Democrats and some Republicans oppose. 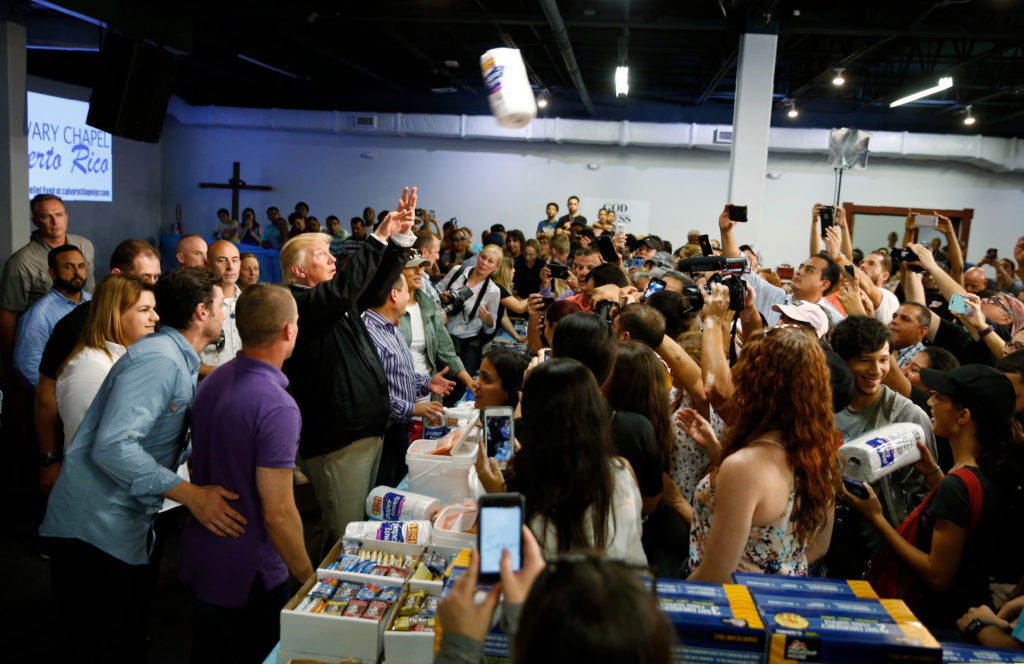 President Donald Trump seen throwing rolls of paper towels into a crowd of local residents affected by Hurricane Maria during his visit to Puerto Rico, on October 3, 2017. Trump drew criticism for the administration’s response to the hurricane. File photo by REUTERS/Jonathan Ernst

Castro took a similar approach in his visit to Puerto Rico earlier in January. The former San Antonio mayor and Housing and Urban Development secretary toured neighborhoods badly damaged by the hurricane and spoke to victims who were denied federal aid aid because they lacked property titles for homes passed down through multiple family generations.

“If you’re trying to make the argument that the Trump presidency is just not who were are as a people, who we are as a country, shining a light on the real struggles people are still having on the island from Maria is a pretty effective way to do it,” said Steve Schale, a Florida-based Democratic strategist.

“To Trump, because of ethnic background or just geography, I think he views Puerto Rico as something other than us,” Shale added. Not recognizing Puerto Ricans as Americans and not responding to Puerto Rico’s humanitarian needs was a “bright line” for many Americans, he said.

“You either stand with your fellow Americans or you don’t,” Schale said.

‘You either stand with your fellow Americans or you don’t.’

Of course, Democrats haven’t been alone in calling for a faster recovery effort. Sen. Rick Scott, R-Fla., who was serving as Florida’s governor at the time, traveled to Puerto Rico seven times after Maria and also visited Puerto Rican communities in his home state.

Since joining the Senate, Scott has called for more recovery funding for Puerto Rico and said he wants to be the island’s “voice” on Capitol Hill.

“When you have a multitude of political candidates that are are vying for the Democratic nomination for president, every little delegate, every little territory [counts],” said Carlos Vargas,a political scientist at Hunter College’s Center for Puerto Rican Studies. He noted that Puerto Rico awards more delegates than more than 20 states.

But Hurricane Maria triggered a mass migration of more than 125,000 Puerto Ricans, according to census data, decreasing the island’s voting base. Many hurricane victims resettled in Florida, where the overall number of island-born Puerto Ricans has increased 30 percent — or 126,000 people — since 2016, according to the Pew Research Center.

“If you look at the fraction of Puerto Ricans that are potentially voting for you in a primary election, there are other places that you may want to go,” said Daniel Smith, a political science professor at the University of Florida. 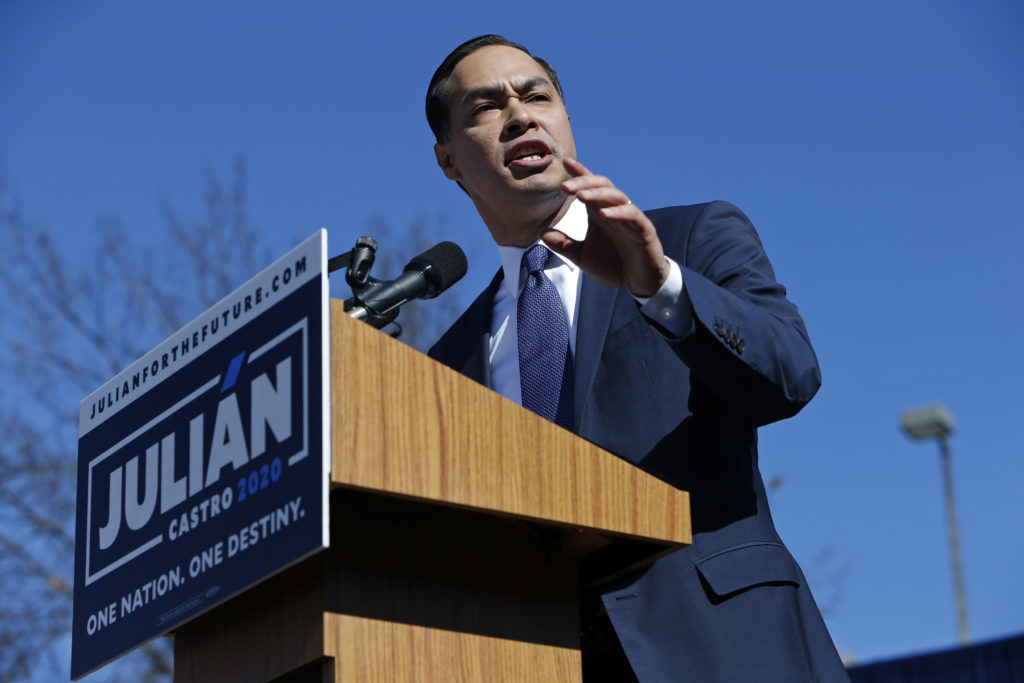 Vargas acknowledged that boosting turnout among Puerto Rican voters — at least on the mainland — has always been a challenge.

“Puerto Ricans tend to live in counties and cities that are not highly competitive” because they skew heavily Democratic, he said. “Neither the Democrats or Republicans have an incentive to mobilize this population.”

While that may be true in states like New York that have large Puerto Rican populations, the physical and emotional impact of Hurricane Maria may have changed how Puerto Ricans on the island engage with U.S. politics. It’s a shift that helps explain why Puerto Rico has taken a star turn in the early stages of the 2020 Democratic primaries.

“The one thing that has changed since Maria is the relationship between the diaspora and the people of Puerto Rico, both [at the] leadership level, but also at a grassroots level. They have really become close and more connected,” said Marcos Vilar, the president of Alianza, an organization that promotes civic engagement in U.S. Hispanic communities in Florida.

Vilar said he’s noticed that Puerto Rican media and residents on the island have become more interested recently in the news taking place in the states, particularly in Florida.

At the same time, the island’s crushing $120 billion debt remains a critical issue.

Eva Prados, an attorney and leader of the advocacy group Citizen Front for the Debt Audit, said he followed Warren’s visit to Puerto Rico closely because of the senator’s track record of supporting measures to alleviate its debt.

“They have to hear what people have to say,” Prados said. “The amount of responsibility that the U.S. government has over Puerto Rico’s situation is so great that it’s definitely hypocritical for candidates to come here to raise funds and simply give speeches.”