Before Donald Trump became president, Adrienne Bell, an elementary school teacher in east Texas, had never considered running for a higher office than her city council seat. Now, the self-described progressive is challenging the district’s Republican congressman, Rep. Randy Weber, in the 2018 midterms, marking her first foray into national politics.

In ruby-red northeast Indiana, another political neophyte, Courtney Tritch, recently announced that she would run against freshman GOP Rep. Jim Banks next year. Tritch, a marketing consultant, has long been active in her community, but had not considered running for office until President Donald Trump’s victory last November.

“It all came down to this election and thinking, ‘I’m not going to go quietly back to 1950’,” Tritch said in an interview.

The 2018 midterm election is still more than one year away, but already candidates on both sides of the aisle are launching campaigns for the House and Senate. Among the early entrants, one pattern stands out: a growing number of them are female Democratic candidates, like Tritch and Bell, who have challenged Republican incumbents.

It’s still too early to know exactly what impact the wave of female Democratic candidates will have next year. But they could become a factor in an election where the Democratic Party and liberal groups will seek to regain control of the House and rebuild the party at the state and local level.

“For me, the process really started the day after the election,” Katie Porter, a Democrat running in California’s 45th congressional district said. A consumer advocacy lawyer, Porter was invited to work on Hillary Clinton’s economic transition team in the event that Clinton won the election.

“I had all these ideas” about policies to help protect consumers, Porter said in a phone interview. After Clinton lost, “it was very clear to me I wanted to find a different way to do that.”

In 2016, Clinton won the district, which spans an inland region between Los Angeles and San Diego. Voters there also backed Democrat Kamala Harris in her successful campaign for the U.S. Senate. At the same time, the district’s voters also re-elected Rep. Mimi Walters, R-Calif, to a second term.

Porter is hoping to capitalize on the split-vote. Walters is one of only 23 Republicans who represent districts that Clinton carried in 2016. Voters in the district are “shocked and upset and motivated when they learn their representative does not represent their views,” Porter said. 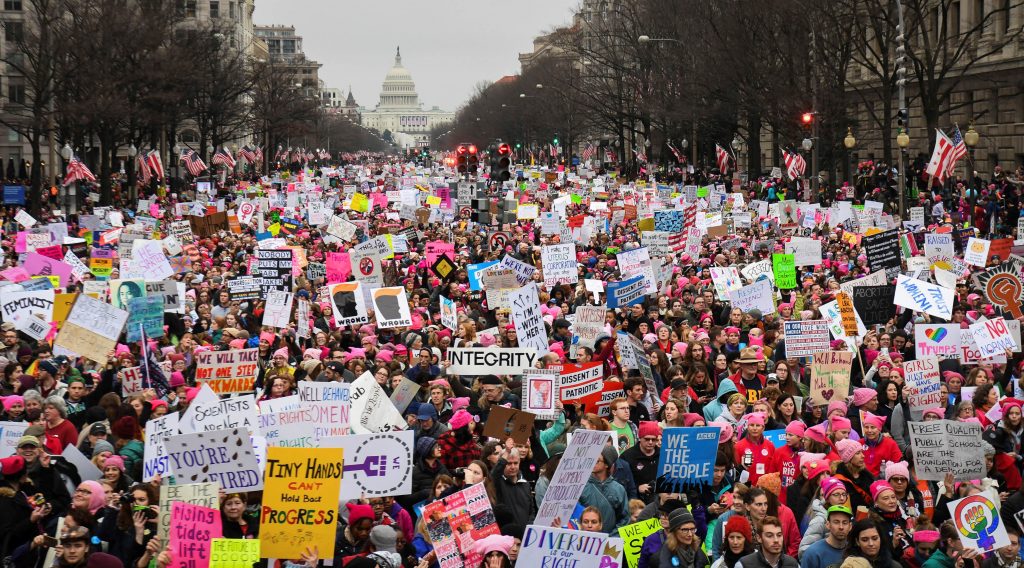 Hundreds of thousands marched in the Women’s March in Washington, DC, on January 21, 2017, the day after President Donald Trump’s inauguration. Photo by REUTERS/Bryan Woolston

In a recent study by American University and Loyola Marymount University, researchers found that so far this year, the number of women running for office has not dramatically changed from previous years. But the report, titled “The Trump Effect,” found that a quarter of the women who have jumped into politics in 2017 began to consider running for office only after Mr. Trump’s election.

The report, based on a survey conducted by the two universities and Politico, examined what Democratic women think about Trump. When asked if they would rather have a private lunch with the president or have a colonoscopy, over 50 percent of the respondents said they would prefer the latter option.

Jennifer Lawless, a professor of government at American University and one of the authors of the study, said that initially the researchers were unsure how Hillary Clinton’s loss in November would affect other women’s political ambitions.

“We generally though it would go either way,” Lawless said in an interview. “Women could either be very deflated by a Clinton loss and check out. The second possibility is they would be more energized than ever.”

It became clear following the Women’s March in Washington, D.C. and other marches across the country the day after Trump’s inauguration that the increased political “interest and activism was less about Clinton, and more about Trump,” Lawless said.

Midterm elections historically bode well for the party out of power. In 2010, the Tea Party movement propelled fiscally conservative Republicans into Congress and helped the GOP regain the House. Tea Party-backed lawmakers formed a bulwark of opposition to then-President Obama’s policy agenda.

Like today, many of the new candidates who ran for Congress in the Tea Party era of 2009-2010 had little to no previous experience in elected politics.

The Tea Party movement was not based on the gender equality issues that are helping drive the wave of women running for office now. But, like today, many of the new candidates who ran for Congress in the Tea Party era of 2009-2010 had little to no previous experience in elected politics.

And there are other signs that the left’s enthusiastic opposition to Trump is similar to the Tea Party movement that coalesced on the right ahead of the 2010 midterms: high voter turnout in the special elections that have been held so far in 2017, rallies against the Republicans’ health care bills, and other protests over issues like climate change and immigration.

Still, Democrats have failed to win a single special election this year. A tough reelection map, especially for Democrats in the Senate, could also impede the party’s ability to replicate the GOP’s gains of seven years ago.

The Trump Effect study concluded that Democratic women, in particular, are politically motivated by strong anti-Trump sentiment. But it also drew a direct correlation between women’s increased political activity — from attending marches and rallies to writing checks for candidates — to taking concrete political action, such as running for office.

Bell, the second-grade teacher from Texas, is a good case in point. Bell’s initial political experience was as a community organizer, and then a 2012 fellow for Obama for America. In 2015, Bell mounted an unsuccessful campaign for a local city council seat. It wasn’t until Trump won that Bell decided to run for Congress. 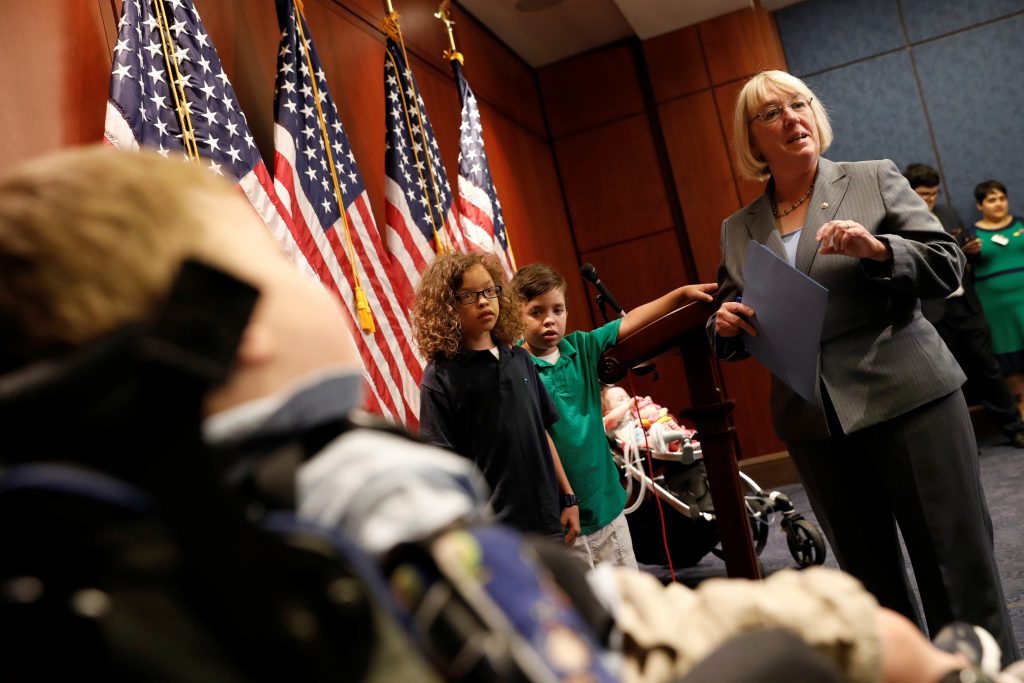 Sen. Patty Murray, D-Wash., was part of a wave of women elected to Congress in 1992. The press nicknamed it “The Year of the Woman.” File photo by REUTERS/Aaron P. Bernstein

The transition from activist to candidate has been nudged along by new liberal grassroots organizations like Indivisible and Swing Left that formed after the 2016 election. The groups are targeting vulnerable House Republicans in 2018, and organize local chapters to boost grassroots support for Democratic candidates. Many of the local chapters are run by women, which has also led to more interest in running for state and local offices.

The Democratic Party is also working to rebuild the party at the ground level. In July, Democratic National Committee Chairman Tom Perez launched the State Party Innovation Fund, which incentivizes state parties to compete for DNC funding. Both Hillary Shields and Faith Chikwekwe are running for a seat in their state’s legislatures, and both have gone from being activists to candidates in the months since Trump entered the White House.

Shields, who had her first taste of politics as a founding member of the Kansas City, Missouri Indivisible chapter, said she “never wanted to be a politician.”

Nonetheless, in July she announced she was running for a seat in the Missouri state senate, a culmination of events following the 2016 election. Trump’s win was a “wake up call” to become a more engaged and active voter, Shields said in an interview.

Chikwekwe is challenging a five-term GOP incumbent in the Georgia state House who has run unopposed in the past three elections.

“We live in a democratic nation,” Chikwekwe said. “If we’re gonna say we’re providing democracy for the people, then we need to give the people of my district a choice of who represents them at the ballot box.”

The transition from activist to candidate has been nudged along by new groups that formed after the 2016 election.

Amanda Litman, the co-founder of Run for Something, a group that recruits young progressive candidates, said Democrats just need to look across the aisle to see how important it is to run and support down-ballot candidates.

“The Republican party has invested a lot of money recruiting and supporting local races and you can see the fruits of their labor now,” Litman said.

But if Republicans are nervous about the potential backlash to Trump and his history — both before and since he became president — of offensive behavior towards women, they aren’t yet showing it.

Jesse Hunt, the press secretary for the National Republican Congressional Committee, said there was no shortage of conservative women seeking office in the 2018 midterm elections. There are “quite a few [Republican] women who are looking to run this cycle or have already announced,” Hunt said in a phone interview.

Despite the high level of interest in politics from Democratic women across the country, there is no guarantee that the early energy will translate into electoral success next year.

Still, some observers drew a parallel between next year’s election and 1992, when scores of women like now-Sens. Patty Murray, D-Wash., and Dianne Feinstein, D-Calif., ran for office for the first time. At the time, some were motivated in part by the way the all-male Senate Judiciary committee treated Anita Hill when she testified against Clarence Thomas’ Supreme Court nomination. In all, four Democratic women were elected to the U.S. Senate that year, and 1992 became known as “The Year of the Woman.”

It remains to be seen if, thanks in large part to Trump, that number will increase in 2018.

Left: An activist attends a demonstration outside the White House as part of the "A Day Without a Woman" strike on International Women's Day in Washington on March 8, 2017. Photo by REUTERS/Kevin Lamarque