Editor’s Note: Saira Blair, an 18-year-old West Virginia University student profiled on Monday’s PBS NewsHour, was elected to the state House on Tuesday. Blair, a Republican, said she was proud to represent her district in a Facebook post following the results. The freshman will spend her spring semester in the state capital Charleston. Her challenger Democrat Layne Diehl said in her own Facebook post that she respected Blair and hoped she would inspire young voters.

Saira Blair studies economics at West Virginia University, belongs to the knitting club and the College Republicans. She also runs a political campaign from her dorm room. In some ways, she is not your everyday college freshman.

For one thing, she dislikes instant ramen, food staple of dorm life nationwide. For another, she might just become the youngest state representative in the U.S.

Blair made headlines around the country last month when, at the age of 17, she ousted 66-year-old incumbent Larry Kump in the Republican primary for the race to represent West Virginia’s District 59 in the state House of Delegates.

She is no stranger to politics. Her father, Craig Blair, served in the House of Delegates for eight years and is currently a state senator. She raised $4,800 for the primary and has raised nearly $11,000 so far for the general election, according to public finance reports. This includes $3,600 of her own money, she said. She is running against Democrat Layne Diehl.

Blair is staunchly conservative — she is against abortion and marriage equality, pro-gun, and wants to lower taxes on businesses. A big priority for her is creating jobs in West Virginia so that the state can retain young graduates, who commonly move out of state to work after finishing school, she said. 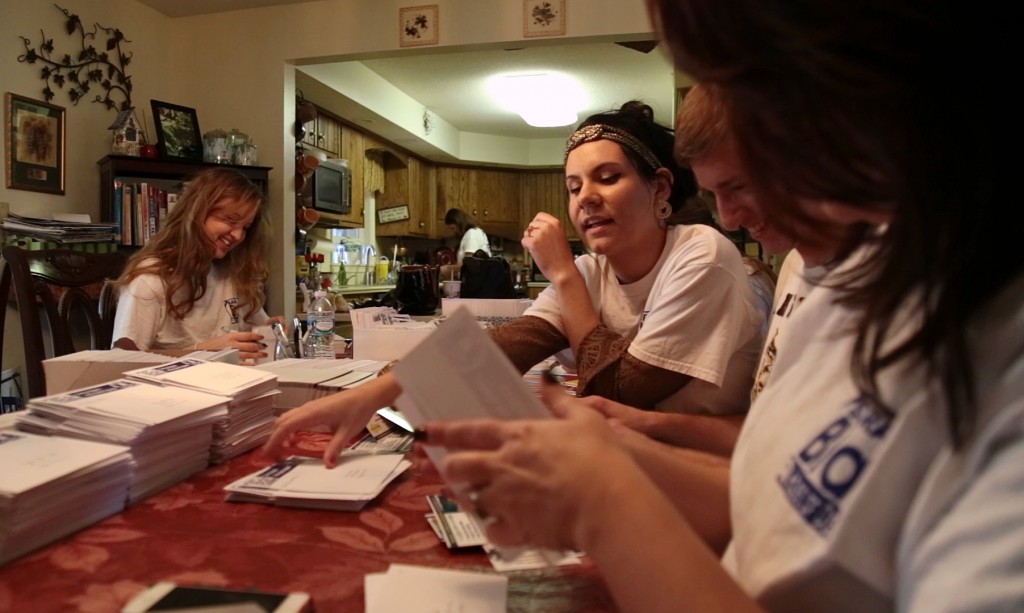 Blair writes letters to thousands of voters in her district. Photo by Matt Ehrichs

At the moment, she is at her family’s house in Hedgesville writing 4,000 letters to voters in her district, urging them to go to the polls. At her side, family members and friends who were in the high school show choir with her are stuffing envelopes assembly line-style and chatting about their latest high school musical.

“This could spontaneously morph into a ‘Glee’ episode,” her uncle jokes.

Blair said it is easy to forget that she is 18 when she is working on the campaign, which she does between class and plans with her friends. But certain moments bring her back, like when her college classmates tell her that her campaign was a topic of discussion in class.

“I have some poli sci major friends and they tell me, ‘Oh yeah, we talked about you today in class,’ and I’m just like, ‘Oh wow, that’s kind of weird,’” she said.

But Blair says that if more youth focused on economics, they would likely align with conservatives. “I think a lot of young people have the same views as I do, but they just don’t realize it,” she said.

And she knows that other people — in particular, her potential future colleagues — might have a harder time forgetting her age than she does. She is prepared to assert herself, she said.

“Everybody has respected me to this point and knows that if I win, I expect not to be babied,” she said. “I want to be treated just like the big boys or I wouldn’t be doing this.”

Mr. Blair said he’s not worried about his daughter’s ability to handle her age difference with other lawmakers if she is elected. “She knew full well what she was getting into when she stepped into the arena,” he said.

The “arena” is a state where recent elections have defied decades-long loyalties. In West Virginia’s state government, Democrats dominate the governor’s office along with the House and Senate chambers. The state House and Senate have both been majority-Democrat since 1930.

Blair sees her campaign at the forefront of that shift. “I think it’s amazing to potentially have the opportunity to be part of such a big change,” she said. “And I think my race, because of my age, represents the idea [of] change.”

In Berkeley County, where part of District 59 is located, more people than usual — 1,805 voters — came to the polls in the first three days of early voting, according to Bonnie Woodfall, chief deputy of elections for the county.

Voters outside the polls voiced mixed opinions of the young Blair. Carol Bogacz, a voter in Berkeley County, said she thought Blair received votes because she is a political novelty, not because of her ability to lead. “I think she’s too young to represent the district,” she said.

Several others, including District 59 voter Ronnie Albright, said they had voted for Blair along party lines and believed she could represent them.

Regardless of party, Blair could inspire other young West Virginians to vote, said Lauren Wilkes, who attended high school with Saira and now is a classmate at West Virginia University. “I hope a lot of our class would come out,” she said.

Wilkes said she plans to move to Charleston, West Virginia, after college to work in fashion, citing Blair as an inspiration to live and work in the state.