PALM BEACH, Fla. — No doubt Florida’s oceanfront Mar-a-Lago resort is an impressive site for a summit between the presidents of the U.S. and China. And it’s a pretty nice business advertisement, too, for the owner of the luxurious, members-only private property.

That would be Donald J. Trump.

Even before this week’s summit, President Trump and his aides had begun referring to Mar-a-Lago as the “Winter White House,” a marketing coup for a man who has made millions selling his personal brand. Now the president is writing his property deeper into American history books by meeting there with China’s Xi Jinping.

The two-day summit, partly to discuss sensitive trade issues, follows five previous weekend trips that Trump has made to Mar-a-Lago in the 12 weeks he has been president. On his fourth weekend in office, Japanese Prime Minister Shinzo Abe joined him there, and the two heads of state huddled on the restaurant’s patio before making headlines with a televised joint response to a North Korean missile test.

But Mar-a-Lago isn’t just a vacation home for Trump. It’s a for-profit part of his global real estate empire. That makes “Winter White House” more than a charming phrase; it’s good for business.

Breaking with presidential precedent, Trump held onto ownership of his businesses when he took office, meaning he makes money when his properties do well. The resort doubled its membership fee to $200,000 after he was elected. And “Winter White House” is working its way into marketing materials. When Trump is in town, Mar-a-Lago’s hotel rooms and restaurant reservations fill up fast.

The Trump Organization has agreed not to exploit any aspects of the presidency, but those who lease and visit the properties are more than happy to do that work. When the Distressed Investing Summit convened in Palm Beach last month, its brochure noted the opening reception would be “at the famed Mar-a-Lago club, one of the most highly regarded private lairs in the world and the new Winter White House.”

Trump hasn’t been shy about mentioning his Florida property, either. A few days before he took office, he tweeted a photo of himself with the message, “Writing my inaugural address at the Winter White House, Mar-a-Lago, three weeks ago.”

While the president and vice president are exempt from the promotional prohibitions facing other government employees, there’s an overarching principle that all public officials should avoid using their offices for private gain, said Kathleen Clark, a former ethics lawyer for the District of Columbia and a law professor at Washington University in St. Louis.

“The president’s recurrent trips to Mar-a-Lago and other properties he owns, particularly with leaders that make the visits newsworthy, means he is in effect using the presidency to promote his business,” Clark said. “He’s a very effective marketer, and he’s using the presidency as though it’s just part of him being famous and doesn’t come with other moral, if not legal, obligations.”

Trump’s presidential visits to his commercial properties go beyond Mar-a-Lago. Since his Jan. 20 inauguration, Trump has made 17 trips to three of his golf courses (two in Florida and one in Virginia) and twice dined at his new hotel in Washington, just down Pennsylvania Avenue from the White House.

Trump’s son Eric, who is helping to lead the Trump Organization in his father’s absence, said the Florida property is “his Crawford, Texas.”

“You go back at it — all these foreign leaders remember their time in Crawford. They all talk about being there,” Eric Trump said. He said his father similarly forges strong relationships at the Florida property.

“That’s how you get a deal done,” he said. “Mar-a-Lago is an impressive place; it makes sense to be there. He’s working. This is how he works.”

That’s just fine with local Trump supporters and others who say the visits bring welcome attention, drawing tourists and business.

“I think we are all proud here in Palm Beach that we have a president who lives here. We are glad to have him,” says Sid Wrightman, retired owner of an import-export business.

But others are unhappy about the detours and extra cars clogging roads during Trump’s frequent visits — and the local money that goes for law enforcement overtime and other expenses.

“If this was Barack Obama,” says attorney Tim Morell, the Trump supporters “would be yowling. I would like to see what would happen if the town of Palm Beach and the county said, ‘We aren’t paying, we aren’t sending our guys.'” 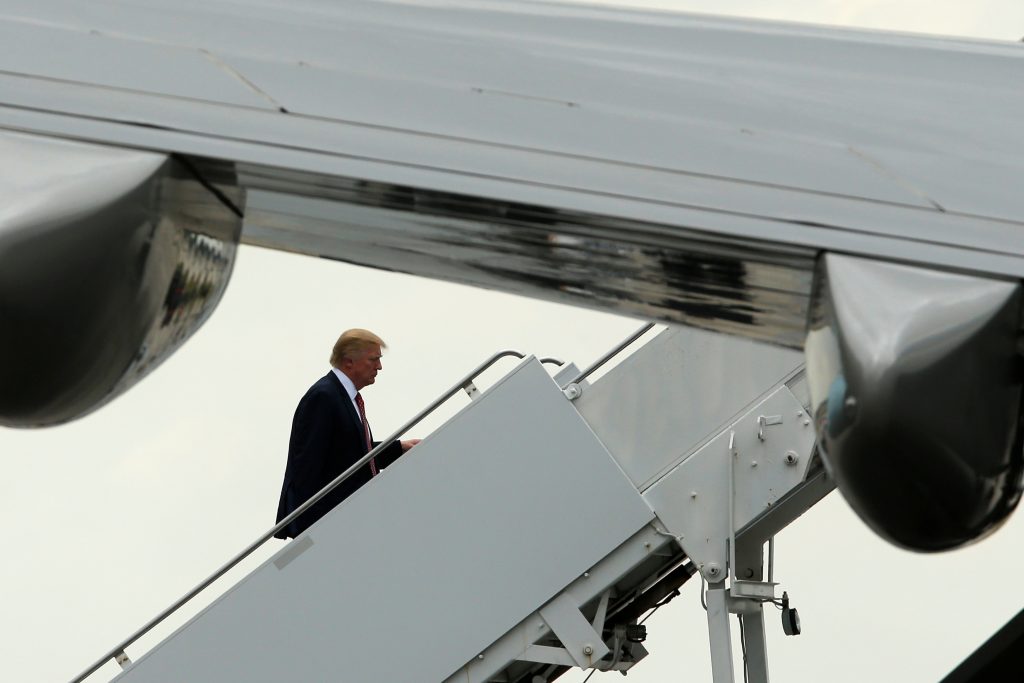 President Donald Trump boards Air Force One on Mar. 5 after spending the weekend at the Mar-a-Lago Club in Florida. Photo by REUTERS/Jonathan Ernst.

Trump’s use of the property is a version of what the original owners always imagined.

Cereal heiress Marjorie Merriweather Post and her financier husband, E.F. Hutton, built the property in the 1920s and had hoped future presidents and dignitaries would use it as a winter retreat. Upon her death in 1973, Mar-a-Lago was donated to the government, but when presidents declined to use it, it fell into disrepair and was returned to her estate.

Trump bought it for $10 million in 1985 and later turned it into a 500-member club in addition to a private vacation home.

So far, Trump has not expressed any interest in using Camp David, the government-owned Maryland mountain retreat 62 miles northwest of the White House. Just as the positive P.R. from Trump’s visits to his properties may boost his own bank account, Camp David would be less costly for taxpayers.

Trump could eventually face blowback from voters over that, said Clark, the former ethics lawyer.

“The combination of a perceived abuse of office to enrich himself and the irony of it happening while he is recommending deep budget cuts for public services — I think resentment will build,” she said.

White House press secretary Sean Spicer dismisses that possibility. Asked during a recent briefing whether the president is concerned about the pushback on the cost of his trips, Spicer said, “No, he feels great.”

Left: An aerial view of Mar-a-Lago. A two-day summit with China's Xi Jinping follows five previous weekend trips that Trump has made to Mar-a-Lago in his 12 weeks in office. Photo by John Roca/NY Daily News/Getty Images.