It was the latest stop on his “Barnes for Barns” tour through rural Wisconsin aimed at appealing to the voters who more typically fuel Republican victories in this closely divided state.

The discussion at Hinchley’s Dairy Farm with an invited group of farmers covered the expected topics — climate change, affordable health care, the alarming rise in farmer suicides and a decline in the small dairy farms that Wisconsin is known for. But it kept circling back to one key question:

How do you beat Ron Johnson, the Republican incumbent?

“We show up,” said Barnes, the state’s lieutenant governor. “We talk to people directly about the challenges they face and that Ron Johnson has consistently ignored. I think one of the biggest problems is a lot of places outside of Milwaukee and Madison just haven’t seen enough Democrats.” 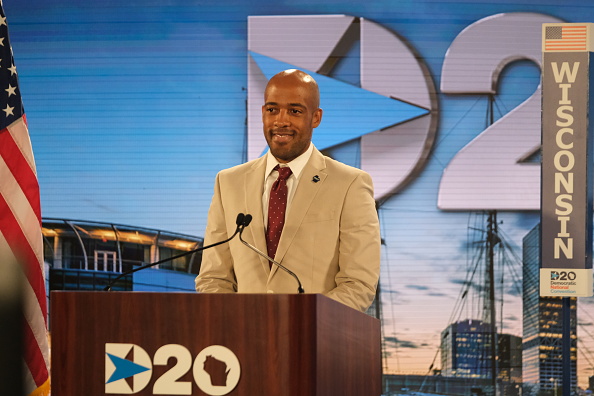 Wisconsin Lt. Gov. Mandela Barnes offers his state’s votes to nominate former Vice President Joe Biden as the Democratic nominee for president at the 2020 Democratic National Convention at the Wisconsin Center on August 18, 2020 in Milwaukee, Wisconsin. The convention, which was once expected to draw 50,000 people to Milwaukee, Wisconsin, is now taking place virtually due to the coronavirus pandemic. (Photo by Gabriela Bhaskar-Pool/Getty Images)

Beating Johnson has vexed Democrats ever since the former plastics manufacturer blew onto the scene as a tea party outsider in 2010 and beat Democratic Sen. Russ Feingold, and did it again in 2016. On the way, Johnson has become one of Donald Trump‘s most vocal — and to his opponents, most loathsome — supporters.

Johnson was first elected as a fiscal conservative, known for attacking spending and a desire to lower the national debt. His campaign ads featured plenty of bar graphs and charts. In recent years, as the coronavirus rose and Trump fell, he has become a lightning rod as he staked out anti-science positions and embraced conspiracy theories on the 2020 election.

Johnson elevated unproven COVID-19 treatments such as mouthwash and questioned the need for COVID-19 vaccines. He dismissed climate change as “bull——.” He joined the many Republicans who have played down the riot at the U.S. Capitol on Jan. 6, 2021, saying he wasn’t scared by the insurrectionists but would have been concerned if they had been Black Lives Matter protesters.

More broadly, Johnson voted for a massive tax cut that he recently admitted benefited his business and wealthy campaign donors; blocked proposals to distribute $1,200 stimulus checks to Americans; and argued against landing a federal contract that would have brought hundreds of jobs to Wisconsin.

Now, with control of the Senate at stake and Wisconsin among a handful of states with toss-up races, Johnson goes before voters with an energized conservative base and with bad poll numbers for a Democratic president whose party historically loses in midterm elections.

Yet still, there is optimism among Democrats that Johnson — whose favorable rating stood at 33% in February in the Marquette University Law School poll — is more vulnerable now than ever.

Democratic strategist Joe Zepecki said Johnson “benefited from two very good Republican years in ‘10 and ’16. He may benefit from one again. The challenge is how do you buck that trend.” He added: ”I think we can do it. He’s given us enough grist for the mill.”

Democrats intend to paint Johnson as a different man from the one voters elected in 2010, someone who morphed from an outsider businessman concerned about the national debt to, as Zepecki calls him, “a conspiracy theory-fueled crank.”

They are hoping Johnson’s most incendiary comments will turn off just enough of the moderate Republicans who deserted Trump in the Milwaukee suburbs and just enough of the roughly 7% of independent voters to tilt things their way.

The desire to beat Johnson has, for now, largely united the top Democrats in the Senate race before the Aug. 9 primary.

Alex Lasry, an executive with the Milwaukee Bucks — his father, Marc, is part owner — has spent millions on television ads as he courts organized labor and attacks Johnson as anti-worker.

Sarah Godlewski, the state treasurer, portrays Johnson as an out-of-touch extremist in her ads. She has been endorsed by Emily’s List.

Tom Nelson, the Outagamie County executive, trails in money but leads in cleverness, cutting creative online videos that include a garage sale fundraiser (his children’s dinosaur toys for $10).

Barnes, who is Black, leads the Democratic field in money, endorsements and early polls. Rural voters aside, his winning strategy almost surely depends on energizing minority voters in his hometown of Milwaukee — a huge cache of liberal votes that is key to any Democrat running statewide.

Republicans dismiss Barnes’ swing through rural Wisconsin, pointing to comments he made in the 2018 governor’s race in which he said he wasn’t interested in winning over Trump voters. (Barnes later said he wanted to appeal to all “forgotten” voters.) They also dismiss the broader Democratic strategy of attacking Johnson as extreme, saying that similar attacks failed in his past two races.

“At this point, I just don’t see the game plan where Republicans are going to leave in droves,” longtime GOP strategist Brandon Scholz said. “This is a 50-50 state. In a competitive race, if both sides do their job someone is going to win by a point or two.”

Johnson campaign spokesman Jake Wilkins said the senator’s strategy for winning is to “work hard and simply tell the truth.”

“The Democrats’ strategy is obvious,” Wilkins said. “They will continue to lie about and distort his record and take everything he says out of context to falsely portray his stance on the issues. His biggest challenges will be the massive spending by liberal outside groups, and the partisan liberal media that advocates for Democrats by pushing the radical left’s message and agenda.”

As long as Johnson can maintain the same margins that Trump did in more rural parts of Wisconsin, and perform as well in suburban Milwaukee counties as he did in 2016, he will win, said Republican strategist Keith Gilkes, who ran former Gov. Scott Walker’s first campaign.

Plus, Wisconsin has a long history of electing maverick politicians — like Feingold and Joseph McCarthy, the disgraced communist hunter whom many on the left have increasingly compared to Johnson.

Johnson hasn’t always had the full support of the Republican Party establishment, but with so much on the line this year that does not appear to be in doubt. The Senate Leadership Fund, a top Republican super PAC, is “all-in” on reelecting Johnson, its spokesman Jack Pandol said.

Johnson may also benefit from the large Democratic primary where millions have already been spent and where Republicans hope the winner will have to move so far to the left to win, he or she will emerge short on cash and bruised.

If the economy and inflation remain top issues for voters this fall, Johnson will win, said Gilkes, the Republican strategist.

“If it’s not relevant to what the current conversation is, people simply don’t care,” Gilkes said. “I think Trump proved that out in 2016. There are a number of regrettable comments the president made and he still won.”