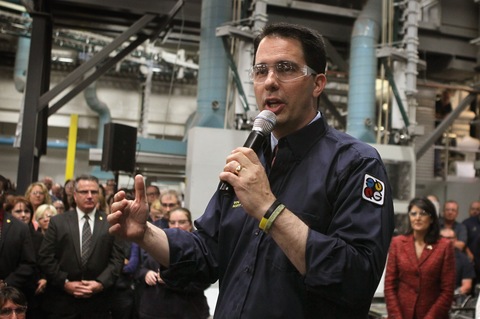 Gov. Scott Walker speaks to employees during a campaign stop at Quad Graphics in Sussex, Wis.

Wisconsin Gov. Scott Walker Tuesday avoided becoming the third governor in U.S. history to be recalled, beating back a challenge from Milwaukee Mayor Tom Barrett, according to the Associated Press.

With 30 percent of the vote in, Walker held a 59 to 41 percent lead over Barrett.

For Barrett, the result is the second time he’s come up short against Walker. The Democrat lost by five percentage points in the 2010 gubernatorial election.

Tuesday’s vote marks the end of 16 months of political turmoil in Wisconsin, which began in February 2011 when Walker, just a month after taking office, introduced a budget repair bill stripping away nearly all collective bargaining rights for most public sector employees.

The move spawned massive protests at the capitol in Madison, and ultimately led to the gathering of more than 900,000 signatures by Democrats and labor activists to recall Walker.

Walker’s campaign strategy included a steadfast defense of his reforms, which he claims were necessary to close the state’s $3.6 billion budget deficit. “That’s where it started. We should end that way,” he said last week during a stop at a metal stamping plant in Manitowoc. “I haven’t changed from what I started last year. I haven’t changed throughout this process. I’m not changing now.”

Barrett, meanwhile, attacked Walker as the “rock star of the far right” who has tried to imprint a national conservative agenda on a state with progressive roots. “To me that was so disturbing, as a person who has lived his whole life in Wisconsin, to see that he wants to use this state — our state — as an experimental dish for the right wing in this nation.”

With his victory Walker avoided the fate of the two other governors who faced recalls and were ousted from office: California Gov. Gray Davis in 2003 and North Dakota Gov. Lynn Frazier in 1921.

The recall saw a record level of spending for a Wisconsin political contest, with more than $60 million spent by the campaigns and outside groups. Walker’s organization led the way with nearly $30 million — money Tuesday night that would appear to be well spent.

Read our Storify for a recap of our coverage. And for a look at the potential national repercussions of the Wisconsin recall be sure to check out Jeffrey Brown’s report that aired on Monday’s NewsHour.