As the Biden administration prepares to announce its first major slate of ambassadorial nominees, a group of former women ambassadors and other national security leaders is urging him to prioritize gender parity.

“Our vision of gender parity means that a man or a woman has an equal chance, at all times, of ascending to each ambassadorship. This should be true across all geographic regions, in posts both large and small,” the Leadership Council for Women in National Security (LCWINS), a group of current and former national security professionals, and 30 former female ambassadors said in a letter.

Piper Campbell, former ambassador to Mongolia and the U.S. mission to the Association of Southeast Asian Nations (ASEAN), said the timing of the letter was to influence a selection process that, to the groups’ understanding, was still ongoing.

“That’s something that we hope can still be impacted,” she said.

During the presidential campaign, Biden signed a pledge with LCWINS to pursue gender parity in senior national security and foreign policy government positions.

LCWINS has been tracking the representation of women in the Biden administration, including more than 200 Senate-confirmed national security leadership positions, 200 ambassadorships and many more non-Senate confirmed roles. So far, the tracker has found Biden has the highest representation of women ever in a presidential Cabinet, at 42 percent, but that his National Security Council falls short of parity with only 36 percent of roles held by women.

Only one member of the council, U.S. Ambassador to the United Nations Linda Thomas-Greenfield, is a woman of color.

Early this month, LCWINS partnered with Women Ambassadors Serving America, a group of current and former U.S. ambassadors, on a letter to Biden urging him to appoint more women to ambassadorships, including those posts considered the most high-profile.

So far, the Biden administration has only nominated one ambassador, Thomas-Greenfield. But about half of top U.S. diplomatic posts around the world remain filled by holdovers from the previous administration, of whom 60 percent are menand 40 percent are women.

The New York Times reported that the Biden administration was likely to announce its first slate of nominees, including to serve as ambassador to NATO and the European Union, as well as some European and other key countries, in mid-April.

Campbell noted that female ambassadors are most likely to serve in small African nations, multilateral organizations and former Soviet states, and that the Biden administration should more equitably distribute appointments of both female career foreign service officers and political appointees. 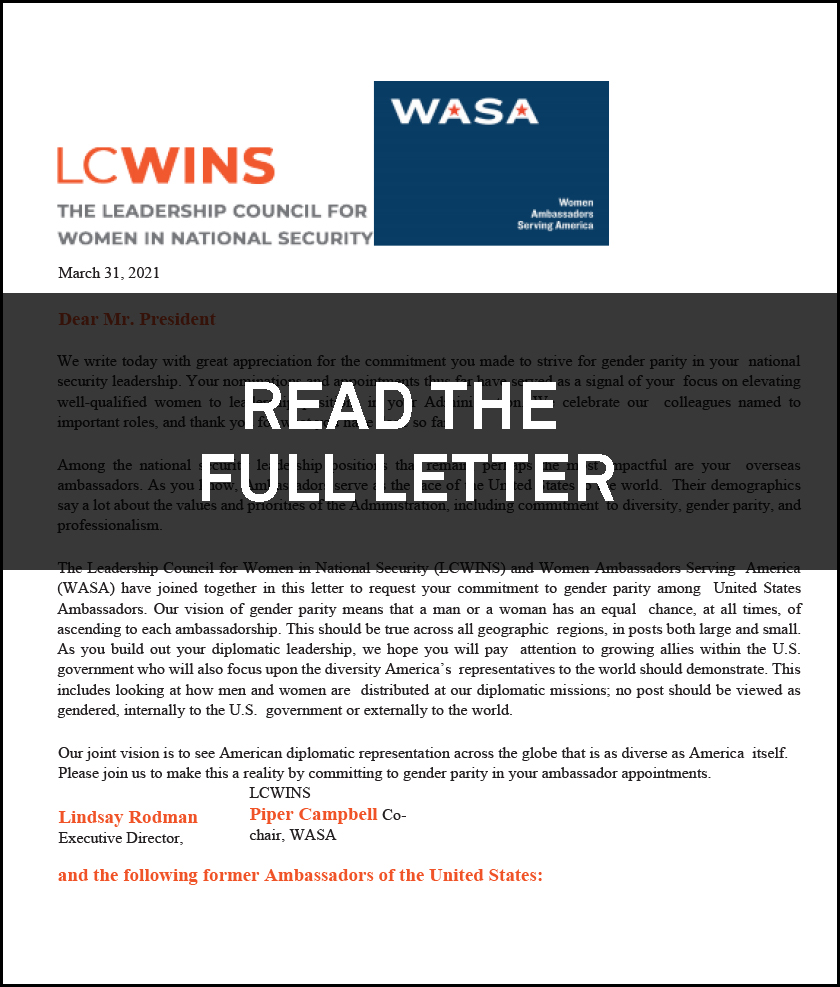 Andrea Schneider, director of the Institute for Women’s Leadership at Marquette University, said outside efforts, like the letter urging gender parity among ambassadorships, are still required in order to see change in all institutions. She noted that when she graduated law school in the early 1990s, the male-dominated leadership at law firms would insist that they weren’t promoting more women because it was a “pipeline issue,” where there just weren’t enough eligible female candidates.

“The idea that this is in one way or another magically going to change itself without actual promises, commitments and action taken, is false,” Schneider said. “If we’re not talking about it, it’s never going to change.”

The White House and State Department did not provide a comment when asked.