The Gender Gap and the Midterms

Ever since women won the right to vote in 1920 — was it only 90 years ago? — there’s been guessing about whether women and men vote differently. This speculation reached a high point during the presidential election year 1980, when men were noticeably more supportive of Republican Ronald Reagan than women. Research suggested this was exacerbated by President Reagan’s public opposition to the Equal Rights Amendment and his active support for a hard line against the United States’ then-nuclear nemesis, the Soviet Union. 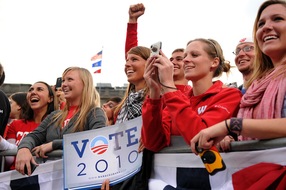 So it’s no surprise that political scientists and journalists spend every election year on the lookout for signs of voter divides along gender lines. It has waxed and waned since 1980, but with a remarkably consistent tendency for men to favor Republicans more than women do. In 2008, 6 percent more men than women supported the GOP presidential nominee John McCain. (White men, in particular, have tended to vote more conservatively than almost any other demographic group.)

In this year’s midterms, the gender gap is showing signs that it’s alive and well in crucial Senate races. I saw evidence of this while reporting in Wisconsin two weekends ago. And on Wednesday, a new CNN/Opinion Research poll suggests the gap continues in the Badger State. Results show that while men divide 56 percent to 41 percent in favor of Republican Ron Johnson over Democrat Russ Feingold, women are evenly split between the third term Democratic incumbent and his GOP challenger, 48 percent to 48 percent. Adding together all voters, Johnson is ahead 52 percent to 44 percent.

This new poll shows an even more pronounced gender difference in Washington state, where Patty Murray, the Democratic incumbent senator, is winning the women’s vote by two to one, 62 percent to 31 percent. But men prefer the Republican Dino Rossi, 55 percent to 40 percent. Overall then, women are the basis of Murray’s 8 point lead over Rossi.

But this is not to say women voters always prefer the female candidate. In Delaware, where the GOP Senate nominee is the colorful tea party favorite Christine O’Donnell, women prefer her male opponent, Democrat Chris Coons, by a 27 point margin: 61 percent to 34 percent. O’Donnell is also trailing among male voters, 42 percent to 53 percent – but not by as large a margin as among women.

One other poll recently that showed a lift for a Democratic woman candidate was in California, where incumbent Sen. Barbara Boxer was leading her Republican female challenger, Carly Fiorina, by almost 20 points. The poll, done in late September, also for CNN and Opinion Research, showed men favoring Fiorina by 3 points — 48 to 45.

Since the economy and the poor jobs outlook are issues voters say are uppermost on their minds this year, it’s curious that women — who worry about their families — aren’t more critical of the performance of incumbent Democrats. But it’s also well understood that women tend to be more supportive than men of a larger role for government, when citizens are in need — something Republicans are railing against this year.

Still, if the gap bears out on Election Day, through exit polls of voters, it’ll be worth asking why. Former campaign pollster for both Bill and Hillary Clinton, Mark Penn, told Politico’s Ben Smith recently that “men seem more energized than women to turn out and vote” this year. If Penn is right, why is that the case?