You May Say He’s a DREAMer: John Lennon’s Immigration Case 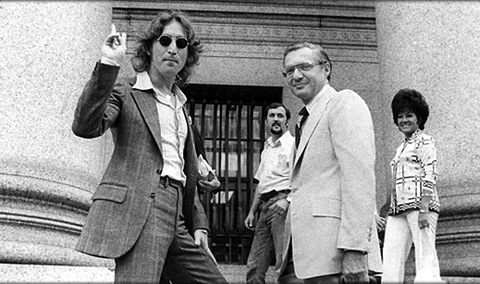 Former Beatle John Lennon, left, fought to stay in the U.S. in the 1970s with the help of his attorney Leon Wildes, right. Photos courtesy of Wildes & Weinberg P.C.

In many ways, Leon Wildes wrote the ballad of John Lennon and Yoko Ono and the undocumented immigrant in America.

The New York immigration attorney represented Lennon and Ono in their blockbuster immigration trial throughout the 1970s. He helped the rock star successfully fight deportation. And through Wildes, Lennon’s situation exposed the standards upon which President Obama’s administration has built its Deferred Action for Childhood Arrivals program, which allows young undocumented immigrants who’ve grown up in the United States to stay in the country. Obama announced the policy after he was unable to work with Congress to pass the so-called DREAM Act, which contained similar provisions to deferred action as well as a path to citizenship.

Lennon’s tale lives as the stuff of folklore for immigration lawyers — a story they all know, and where the details sound wilder at each retelling.

The story is best told by Wildes, now 79, because he lived it. In 1971, Lennon arrived in New York City on a visitors’ visa, Wildes said. The then-former Beatle had a short rap sheet from the United Kingdom — where he had pleaded guilty to unlawful possession of cannabis resin that police had found in his London apartment.


In spring 1972, both Ono and Lennon lost their ability to stay in the country. Lennon had little standing here because of the drug charge.

Beatles’ attorney Alan Kahn, who also represented Lennon, contacted Wildes because he led the bar association for immigration lawyers nationwide. Lennon and Ono invited the lawyer to their apartment in Greenwich Village. Lennon made tea. And Ono told Wildes about her young daughter, Kyoko.

Ono was wrapped in a custody battle with her former spouse, filmmaker and artist Tony Cox. The man had disappeared with Kyoko the year before. Ono and Lennon felt they needed to stay in the country to search for her. Their deportation mustn’t happen.

But the U.S. government wanted them gone. Sen. Strom Thurmond wrote to President Nixon’s attorney general, John Mitchell (later of Watergate fame), with concerns about the anti-war British rock star, Wildes said. Lennon was a symbol of the peace movement, and he could hurt U.S. efforts in the Vietnam War by rallying the public. 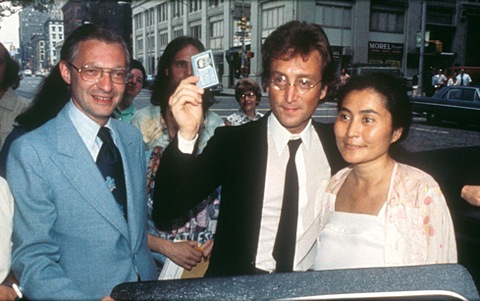 Wildes first protested in court using Lennon and Ono’s contributions to American arts and the humanities as evidence of why they should stay. Ono was granted residency. Wildes then alleged that the government had targeted Lennon, unhappy with his political advocacy. He also contested the definition of cannabis resin.

But key to Wildes’ argument were documents he found proving the government had overlooked deportation cases. Wildes presented 1,800 files showing the government had quietly granted a form of deferred action. Wildes used the records in court on behalf of Lennon, the first time such an argument was made. They won the case in an appeals court in 1975.

“[John] asked me personally, ‘Not everybody can afford lawyers like you. Can we publicize this so everybody eligible can try to get it?’ And that’s what I’ve been trying to do ever since,” Wildes said.

This idea helps form the foundation for the present day deferred action program.

“John Lennon, the famous person that he was, really did not believe he could beat it. And that’s similar to these kids in the United States, that they don’t believe they can beat it,” said Muzaffar Chishti, director of the New York University School of Law office of the nonpartisan Migration Policy Institute. “The letter of the law really does make a difference in the lives of people. It made a difference in John Lennon’s life, and made a difference recently in the kids who are brought here as minors. The Lennon case in many cases crystallizes that just because someone is deportable under the law doesn’t mean you have to deport him.”

But Dan Stein, director of the conservative Federation for American Immigration Reform, sees the Lennon case differently. Lennon was a celebrity, someone with extraordinary power and sympathy from the American public. At the time, he wasn’t seeking to stay in the United States forever.

Lennon’s was exactly the type of special case at which immigration officials could wink, nod and allow to disappear, Stein argues. But to use it as a legal basis to allow the estimated 1.2 million deferred action-eligible immigrants to stay in the country, under one large gesture from the president? No, Stein said, it shouldn’t.

Ono didn’t respond to a request through her agent for comment on American immigration issues.

Wildes practices law in New York City and refers to Lennon as a dear friend. For years, he and Ono exchanged gifts during the holidays. She often sends Christmas cards, and he writes back. 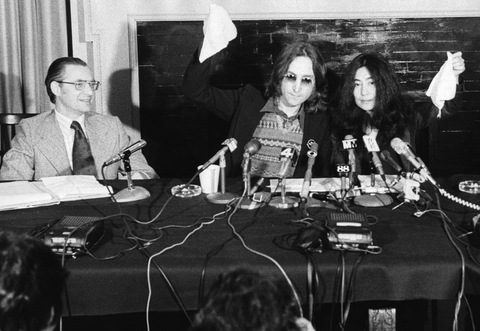 John Lennon and Yoko Ono announce the idea of “Nutopia” in a 1973 press conference, during the time they were fighting to remain in the U.S. At left is Leon Wildes.

Wildes recalled visiting Ono’s apartment, at the Dakota building on Central Park, years after he won the case. When he walked up the steps to enter the back door, he noticed a sign announcing “Embassy of the state of Nutopia.” Lennon and Ono had spoken about this in a 1973 press conference, amid the struggle to allow him to stay in the U.S.:

“We announce the birth of a conceptual country, Nutopia. Citizenship of the country can be obtained by declaration of your awareness of Nutopia. Nutopia has no land, no boundaries, no passports, only people. Nutopia has no laws other than cosmic. All people of Nutopia are ambassadors of the country. As two ambassadors of Nutopia, we ask for diplomatic immunity and recognition in the United Nations for our country and our people.”

Wildes wrote about his work for Lennon in this law review article. And for more on Lennon’s court proceedings, this New York Times piece captures the scene in the courtroom.