When Nikki Fisher cast her first ballot in November 2004, she felt empowered. But she was surprised how many of her high school friends never made it to the polls.

Since then, Fisher has worked to get fellow Oregonians registered to vote. As executive director of the Bus Project, a progressive-leaning nonprofit organization of volunteers, Fisher helped spearhead the Oregon Motor Voter initiative, the nation’s first automatic voter registration system in her home state that began this year.

Voter registration has dramatically increased this year, according to early data. Over the last eight years, Oregon registered about 2,000 new voters on average each month by traditional means. But since automatic voter registration took effect on Jan. 1, the state has registered more than 51,000 voters through Oregon Motor Voters alone, especially young Republican and Independent voters, according to Molly Woon, spokeswoman for the Oregon Secretary of State office, making up a big part of the more than 115,000 total new voters so far this year.

That means 2 percent of 2.2 million eligible Oregon voters signed up through the new system. And of those automatically registered new voters, nearly one in five submitted their ballot for the first time during Oregon’s May 17 primary.

Compare that the same period during the historic 2008 election of President Barack Obama, when Oregon enrolled more than 85,000 new voters overall, according to state records. 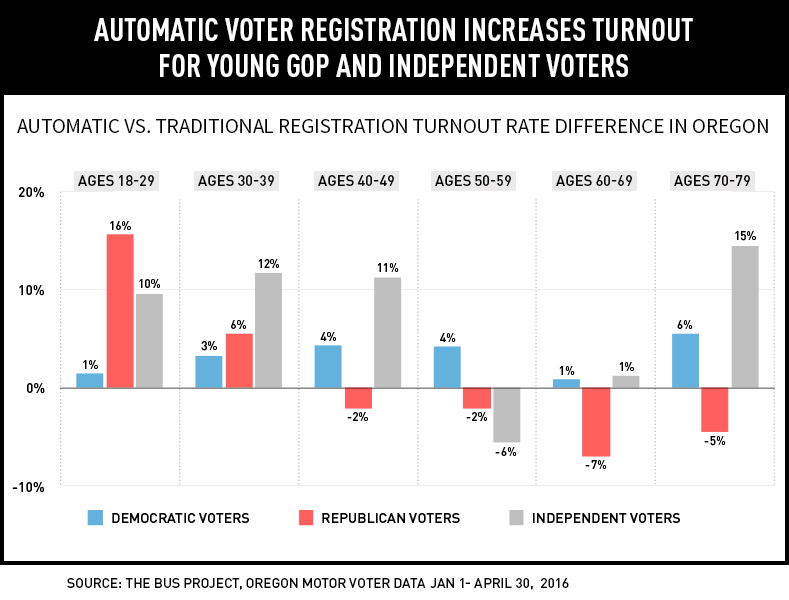 “These numbers are only the first glimpse of how Oregon Motor Voter might result in more participation,” said Oregon Secretary of State Jeanne Atkins in a released statement, adding that her office would further analyze voter turnout after the Nov. 8 general presidential election.

Those numbers “are likely to compound over time, over multiple election cycles” and result in more civic engagement, says Jonathan Brater, who serves as counsel for the Democracy Program at New York University School of Law’s Brennan Center for Justice.

And automatic voter registration is picking up in a rapidly growing number of states nationwide. 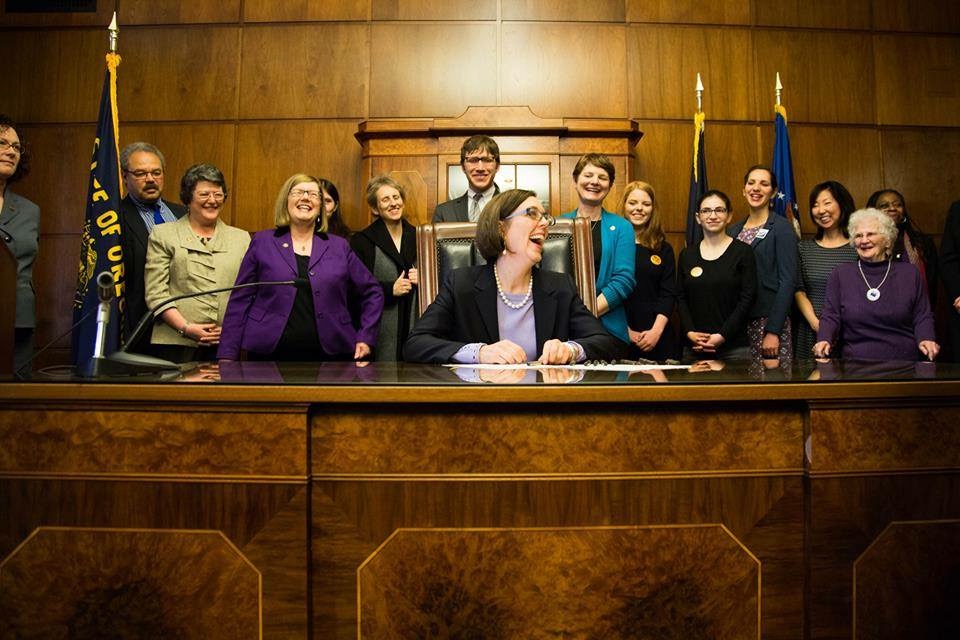 Oregon Governor Kate Brown signed the state’s motor voter registration bill into law on January 1. The new law automatically registers a person to vote based on information they submitted to receive a driver’s license, such as their age and citizenship status. Photo courtesy of Nikki Fisher/Bus Project

Less than two years ago, no one could automatically register to vote, he said, but now, nearly one in five U.S. residents live in states where that’s an option or it awaits a governor’s signature, and 28 states and the District of Columbia have proposed measures that automate voter registration.

A 2012 estimate from Pew Charitable Trust pegged the number of eligible but unregistered voters at 51 million Americans, or about a quarter of the population.

Why don’t more people register to vote? A number of reasons, Brater said. People don’t know the deadline, or problems cropped up after they submitted their paperwork, such as a data-entry error, or their registration papers were lost in the mail.

With automatic voter registration, the government uses the data a person submits when they apply for a driver’s license, such as age and citizenship status, and electronically transfers it to election officials, he says, cutting “down on the chance that people are going to be disenfranchised because of a government error.”