Your guide to Inauguration Day

Presidential inaugurations are steeped in tradition: a peaceful transfer of power, parades, balls and celebration.

“Our history has been that even when one candidate doesn’t win, we accept the results. We move on and we wish the new president well,” said Jim Bendat, a presidential inauguration historian.

But this year’s swearing-in of President-elect Joe Biden on Jan. 20 will be different.

Join PBS NewsHour with live coverage of Inauguration Day 2021 on PBS stations nationwide beginning at 10:30 am ET on Wednesday, January 20, 2021.

Related How communities across the country are honoring COVID victims
By Joshua Barajas
Related WATCH: ‘Field of Flags’ lighting ceremony honors U.S. states and territories ahead of Biden’s inauguration
By Associated Press

A deadly Jan. 6 attack on the U.S. Capitol by supporters of President Donald Trump led to a swift and historic second impeachment by the House. Under new heightened security measures, thousands of law enforcement and military officers will stand guard on the streets of Washington, D.C., as Inauguration Day approaches. Officials are monitoring threats at state capitals, too.

On top of a national security crisis, the coronavirus pandemic that continues to kill Americans by the thousands daily has forced the usual pomp and circumstance to be scaled back and, much like everything else during the pandemic, to become mostly virtual.

The result is a cloud of division, grief and anxiety hanging over the ceremony to usher in Biden’s administration, which will be tasked with trying to bring the country together to lead it out of the dual health and economic crises.

What is the Inauguration Day schedule?

Leading up to Inauguration Day, the Presidential Inaugural Committee (PIC) will host other events. On Monday at 6:30 p.m. EST, a “field of flags” art exhibit on the National Mall will illuminate 56 light pillars and display 200,000 flags representing the U.S. states and territories.

READ MORE: How communities across the country are honoring COVID victims

“The ‘Field of Flags’ represents the American people who are unable to travel to Washington and reflect the PIC’s commitment to an inclusive and safe event that everyone can enjoy from their home,” a committee press release read.

On Tuesday, Jan. 19, PIC will host another lighting ceremony to honor the nearly 400,000 people who have died from COVID-19. Lighting will take place around the Lincoln Memorial in D.C., and in cities and landmarks around the country, like the Empire State Building in New York City, according to the inaugural committee. 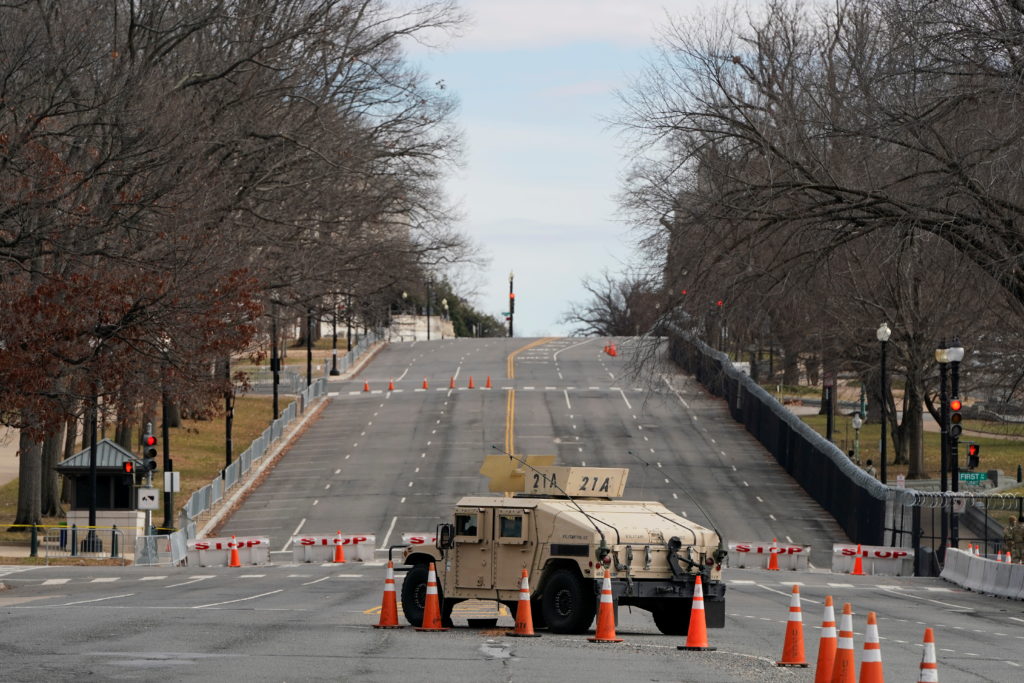 A National Guard vehicle is seen around the U.S. Capitol ahead of U.S. President-elect Joe Biden’s inauguration, in Washington, U.S., January 17, 2021. REUTERS/Joshua Roberts

What kind of security is expected?

The presidential inauguration is a high-security event that has been kicked into overdrive following the Jan. 6 attack.

Trump’s unsubstantiated allegations of fraud in the November presidential election and calls for supporters to descend on D.C. led to a violent mob storming the Capitol to disrupt the congressional process of counting Biden’s electoral votes.

It was a historic security breach that has raised numerous questions and allegations, leading to the resignations of the Capitol Police chief, as well as the Senate and House sergeants at arms.

Typically presidential inaugurations receive a “national special security event” designation, which gives the Secret Service control over coordinating security. Those security measures will be enhanced even more following the riot.

READ MORE: How was a violent mob able to breach the U.S. Capitol? Activists see double standard in police response

At least forty states have committed to sending National Guard members if needed, according to senior military officials, and the D.C. area expects to see up to 26,000 Guard members by Inauguration Day.

“There are going to be more troops there than spectators for the inauguration,” Bendat said. “That’s pretty startling when you think about it.”

D.C. Mayor Muriel Bowser issued a citywide emergency declaration on Jan. 6 that has been extended through Jan. 21. The mayor also extended a ban on indoor dining in the city until Jan. 22 and requested that the Department of the Interior cancel public gatherings through Jan. 24.

In an interview with PBS NewsHour’s Amna Nawaz, Bowser said federal agencies have approved several of her requests for additional precautions ahead of Inauguration Day. This includes extending the national special security event designation several days, as well as making a pre-disaster declaration that allows the Federal Emergency Management Agency to assist with inauguration security preparation.

“I’m more confident with every hour that the system — the kind of structure of how [the inauguration] is supported — is strong,” Bowser told Nawaz about security during inauguration week. “I have asked all of our federal partners to step it up, in light of the Jan. 6 attacks on the Capitol, but also in light of the spread of the threat across the country.”

Despite the international scrutiny and nationwide arrests following the Capitol riot, the FBI has warned law enforcement of possible armed protests on Inauguration Day in D.C. and at state capitals.

The threat of COVID-19 and the post-election tensions between Trump and Biden have prompted other changes to inaugural traditions.

In a typical year, Inauguration Day would begin in the morning with the outgoing president inviting the president-elect and incoming first spouse to the White House for breakfast. The families would then travel together to the inauguration as a symbolic display of the country’s peaceful transfer of power, Bendat said.

“It’s a longstanding American tradition. It really is democracy in action. It’s something that Democrats have respected and Republicans have respected,” Bendat said.

That tradition has been notably disrupted by Trump, who confirmed in a tweet that he would not attend Biden’s inauguration, which will make him the fourth president in U.S. history and the first since Andrew Johnson in 1869 not to attend a successor’s swearing in. Trump is expected to travel to Palm Beach, Florida,on Wednesday morning, according to guidance from the White House press office.

Biden said Trump’s decision is “one of the few things he and I have ever agreed on.”

The swearing in ceremony, held on the steps of the U.S. Capitol, usually takes place before a crowd of about 200,000 invited guests and thousands of members of the public gathered on the National Mall and other nearby spaces. Due to the pandemic, members of Congress will be limited to one guest. The traditional parade down Pennsylvania Avenue and the evening programming will instead be virtual and available to watch on TV or online.

The inauguration theme, “America United,” is a particularly heavy undertaking for a nation rocked by a year of turmoil. Uniting and healing the country has been a core focus for Biden, and a successful inaugural address will aim to assure Americans that the country will make it through this challenging period, said Jeffrey Engel, director of the Center for Presidential History with Southern Methodist University.

“It takes two things to be a truly great president. The first is the ability and the second is you have to govern during a moment of great crisis,” Engel said, citing the legacies of George Washington as the first president, Abraham Lincoln during the Civil War and Franklin D. Roosevelt during the Great Depression.