Your questions about the shutdown, answered

Thursday marked the 13th day of the partial government shutdown, making it the fourth longest in U.S. history.

With the new 116th Congress officially underway, Democrats and Republicans remain at an impasse over border wall funding, the issue that sparked the partial shutdown last month. President Donald Trump has demanded $5 billion for funding for a border wall, but congressional Democrats remain opposed to the plan.

Are you affected by the shutdown? Share your story here

House Democrats are slated to vote on a series of bills Thursday night to reopen the government, hours after formally taking control of the chamber. But the legislation doesn’t include border wall funding, and since the GOP-controlled Senate is unlikely to pass a spending package without White House approval, the shutdown could last a while.

With no clear end in sight, here’s a look at how the shutdown is affecting federal workers, agencies and the public.

1. Which agencies are funded, and which ones aren’t?

About a quarter of the federal government ran out of funding when the shutdown took effect before Christmas. The following departments were impacted:

Funding for the Departments of Defense, Education, Energy, Health and Human Services, Labor and Veterans Affairs were already approved before the shutdown deadline so those agencies are unaffected.

2. How many workers have been affected?

Approximately 800,000 government workers have been impacted by the shutdown. Of those, 380,000 have been furloughed, or sent home without pay.

More than 420,000 federal workers who were deemed essential are working without pay. This group includes people whose jobs are related to emergency work and national security.

READ MORE: 5 reasons why this shutdown is worse for federal workers

The American Federation of Government Employees (AFGE), the largest union for federal workers, filed a lawsuit against the Trump administration Monday arguing that it’s illegal to force employees to work without pay.

“No other employer in this country is allowed to require its employees to go to work and refuse to pay them on payday,” J. David Cox, president of the AFGE, told the PBS NewsHour on Wednesday.

3. Will federal contractors be paid?

And while Congress typically approves back pay for federal workers after shutdowns, some subcontractors — like cleaners, custodians, and security officers — will not receive compensation for the shutdown, according to the property service workers’ union, 32BJ SEIU.

4. What about members of the military?

Overall the shutdown has not affected the military, as it is considered a core government function. The Coast Guard is the only branch of the military whose members ( 42,000 active-duty) are working without pay, because it falls under the Department of Homeland Security. Benefits for family members of troops killed in action will also not be processed.

5. Are national parks and museums open?

The National Park Service is operating with a skeleton staff. The Trump administration has largely left parks open to visitors, however, and some parks and protected areas have been closed due to health and safety threats. 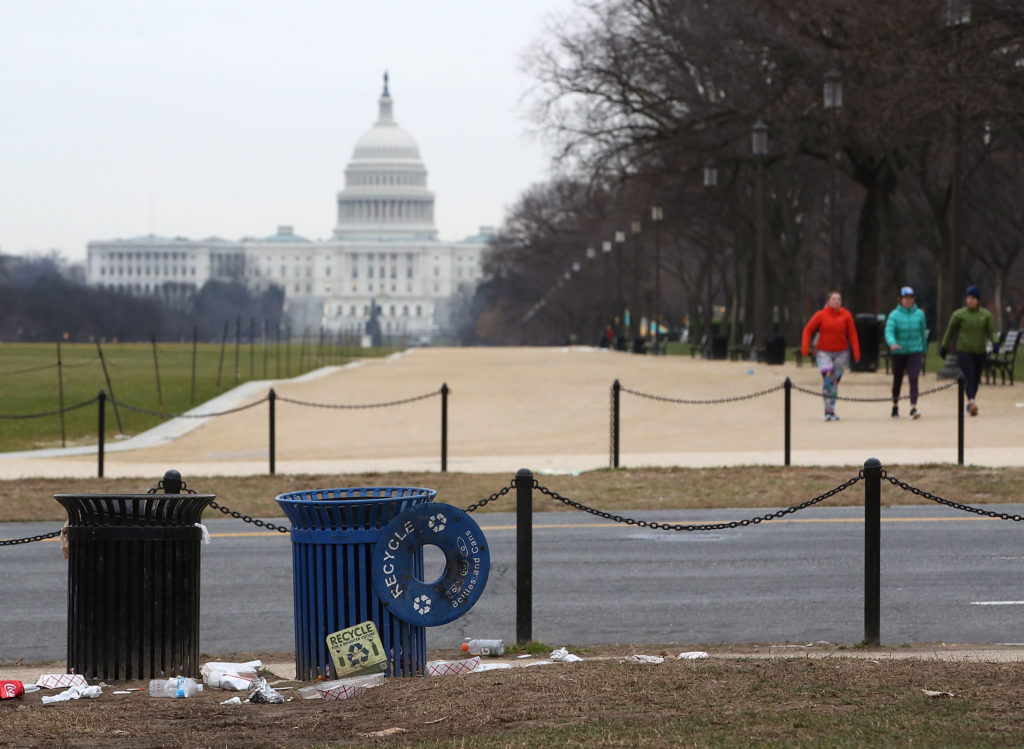 Trash lays on the grounds of the National Mall on January 2, 2019 in Washington, D.C. (Photo by Mark Wilson/Getty Images)

The Associated Press reported Monday that some national parks, like Yellowstone, have been overwhelmed with “human feces, overflowing garbage, illegal off-roading and other damaging behavior in fragile areas.”

Some states have stepped in to keep monuments and parks open at usual staffing levels. For example, New York is paying the federal government $65,000 a day to keep Ellis Island and the Statue of Liberty open.

The Postal Service was not affected by the shutdown, so expect mail service to continue as usual.

Approximately 20,400 of the Department of Transportation’s 55,000 employees have been put on leave. But that doesn’t include Transportation Security Administration agents, federal air traffic controllers, hazardous material safety inspectors, and accident investigators, all of whom have remained on the job.

8. What does the shutdown mean for Social Security?

Social Security and disability checks are still being paid out during the shutdown, because the Social Security Administration has already secured funding for this fiscal year.

9. What about Medicare and Medicaid?

Both Medicare and Medicaid benefits are not affected.

10. How is SNAP being affected?

Eligible households will still receive benefits under the Supplemental Nutrition Assistance Program (SNAP), formerly known as food stamps, until the end of January.

Likewise, funding for the Department of Agriculture’s child nutrition programs will continue into February.

Ninety-five percent of staffing for the office of Food and Nutrition Services — which manages SNAP benefits and other USDA food programs — has been furloughed.

Left: Tourists walk past a sign posted at the entrance of The National History Museum, stating that all Smithsonian Museums are closed due to the partial shutdown on January 2, 2019 in Washington, D.C. (Photo by ANDREW CABALLERO-REYNOLDS/AFP/Getty Images)