Your questions on the Florida recount, answered

Razor-thin margins in Florida’s races for the U.S. Senate, the governor’s mansion and agricultural commissioner have triggered statewide recounts, competing lawsuits and allegations of fraud. For Florida, these races are a major test of whether the state has made progress since it left the nation in a weeks-long limbo over who had won the presidency in 2000.

Almost two decades after Bush v. Gore, Florida election officials are confident that changes they have made to voting procedures — including identical ballots to avoid hanging chads and a single set of rules across counties — will lead to more organized recounts, ones that are expected to take days, rather than weeks.

Here are some of your questions on this year’s Florida recounts, answered:

What are the current standings?

In the Senate race, Republican Gov. Rick Scott leads Democratic incumbent Sen. Bill Nelson by 12,562 votes, or less than 0.2 percent. For governor, the gap is larger, with Democratic candidate Andrew Gillum trailing Republican Ron DeSantis by 33,694 votes, or 0.4 percent. The closest race is for agriculture commissioner, where the Democrat, Nikki Fried, is ahead by 5,326 votes, a 0.06 percent lead against her Republican opponent, Matt Caldwell. Scott, DeSantis and Fried have all declared victory in their races despite the ongoing recounts.

On Saturday, Florida’s secretary of state ordered recounts in the three races. Now, the state’s 67 county departments have until 3 p.m. Thursday to tally more than 8.2 million votes. If some of these counties fail to re-submit vote totals by this deadline, the elections will default to the initial outcomes favoring Scott, DeSantis and Fried.

Will they recount ballots by hand?

If after Thursday results still fall within a quarter point, the state will resort to a hand recount. This step is likely for at least the Senate and agriculture commissioner races, both of which are already within that margin. Then, county officials will have three more days to count, with the deadline set for noon on Nov. 18.

Note that not all votes are recounted in a manual recount — only those marked as undervotes or overvotes, indicating that either no candidate or two candidates were selected for any given race. Election workers must look at each of those to determine if a single choice was intended. 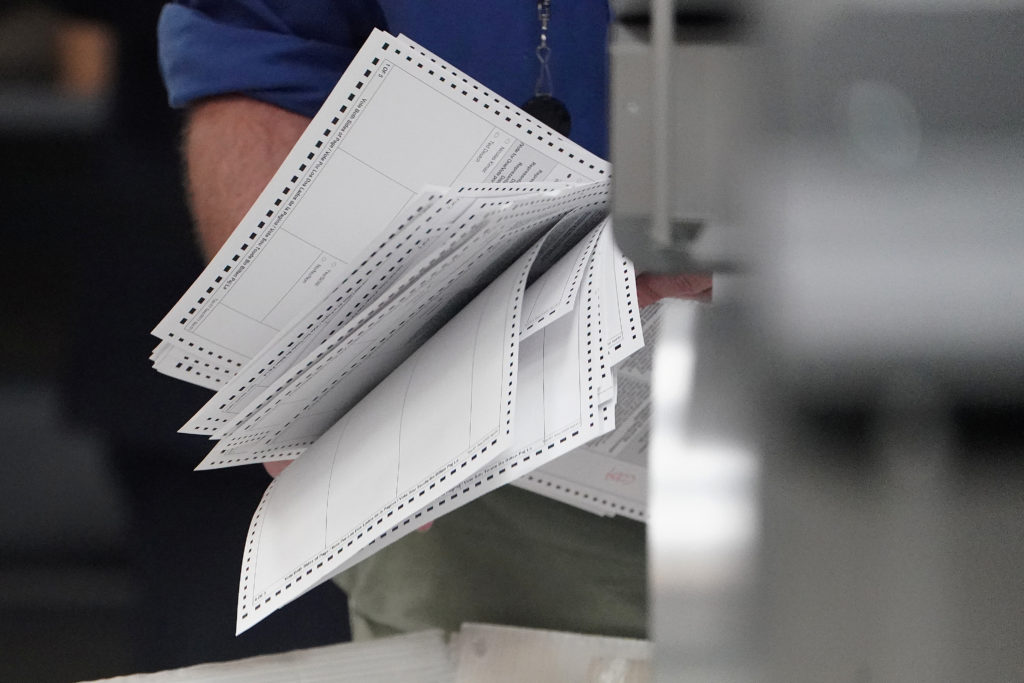 A worker holds ballots before a ballot recount in Lauderhill, Florida, on Nov. 12, 2018. Photo by REUTERS/Carlo Allegri

After a hand recount, the Election Canvassing Commission, made up of the governor and two cabinet members, will meet to certify the final results at 9 a.m. Nov. 20.

What are the parties and candidates saying?

Since the recount began, President Donald Trump, who held rallies in Florida campaigning for Scott and DeSantis, has repeatedly claimed without evidence that Democrats are engaging in voter fraud to steal the election. On Monday morning, he wrote on Twitter that “many ballots are missing or forged,” and said that “an honest vote is no longer possible.” Scott has echoed these fraud allegations, and on Sunday, appeared on Fox News and claimed that Democrats were trying to steal the election. But Jack Tuter, chief circuit judge in Broward County, warned both sides on Monday to “ramp down the rhetoric” and stressed that their words would impact voters across the country.

What do the lawsuits say?

Numerous and competing lawsuits have already been filed by both Senate campaigns since Election Day. Scott’s campaign got the first victory in court when a judge ordered that Brenda Snipes, the Broward County election supervisor, make the ballot-counting procedure public. Nelson’s first case asked to extend the election deadline to review mail-in ballots, which under Florida law must be received by 7 p.m. Election Day to be counted toward the total. Nelson wants that timeline extended so that the count includes any mail-in ballots received up to 10 days after the Election, the current cutoff for ballots mailed from outside the U.S. Nelson has also filed a second lawsuit challenging the state’s decision to invalidate certain mail-in and provisional ballots on which the voter’s signature does not match the one that appears in state voter registration records. Nelson and his team say the state’s name-matching requirement is unconstitutional. That case, along with Scott’s second lawsuit, have not yet been heard in court. The deadline to contest Election Results in court is Nov. 30.

How do these recounts compare to others in state history?

DeSantis’ 0.4 percent lead and Scott’s 0.2 percent lead may be close enough to trigger an automatic recount, but neither race comes close to the miniscule margin in 2000, when George W. Bush led Vice President Al Gore by 0.03 percent, and was ultimately declared the winner by 537 votes. Even in close races, the odds of overturning the original results in a recount are slim: Across the country, there have been 27 state recounts since 2000, and only three flipped the original call, meaning Nelson — and especially Gillum — will have to make historic gains to declare victory.

It’s not just Florida. There are several other states on recount watch, too. In Georgia, Democrats are optimistic that a recount in the governor’s race will force a runoff between Democrat Stacey Abrams and Republican Brian Kemp. While Democrats have already regained control of the House, 10 races are still outstanding, several of them in California. Close races — even those that trigger recounts — are not unprecedented or unusual, said Marian Schneider, president of election integrity nonprofit Verified Voting. But extremely close races in swing states could become more common as the nation grows more politically divided. This year’s results, Schneider said, “would not have been unexpected given how polarized the county is at the moment.”

Left: An election worker takes a ballot to place into an electronic counting machine during a recount at the Broward County Supervisor of Elections office in Lauderhill, Florida on Nov. 12, 2018. Photo by Jayme Gershen/Bloomberg via Getty Images