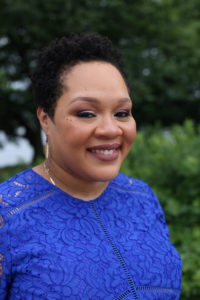 “I’m thrilled to join PBS NewsHour in this new role covering President Trump and his impact on our nation,” said Alcindor. “The show throughout its history and during this current administration has produced stellar work that connects federal policy and politics with everyday people’s lives.”

Sara Just, PBS NewsHour executive producer, added, “I am delighted to have Yamiche Alcindor joining our team. She is a first-class reporter whose doggedness and curiosity perfectly match the NewsHour.”

In her new role at NewsHour, Alcindor will continue to serve as a political contributor for NBC News and MSNBC.

Alcindor currently covers Congress, the impact of the Trump Administration’s policies on working class Americans and people of color, and the intersection of race and politics in America. She was previously a national breaking news reporter for USA Today where she reported on the Newtown, Conn. school shooting, the death of Trayvon Martin, and police related protests in Ferguson, Mo. and Baltimore, Md.

“I’ve read and watched Yamiche’s reporting with admiration and have been struck with how she combines an eye for detail, crisp writing and passion for the craft with a gift for communicating on air,” said Woodruff. “I’m excited to have her join us on this critical beat.”

In March 2017, Alcindor – who described the late PBS NewsHour co-anchor and managing editor Gwen Ifill as one of her mentors – was presented an award in Ifill’s memory at the Toner Prize. Earlier this year, she was also named to The Root’s annual list of the most influential African Americans in the country and to The 1804 List, an award named in honor of Haiti’s year of independence that recognizes influential Haitian-American leaders. In 2013, she was named the National Association of Black Journalists Emerging Journalist of the Year.

Alcindor earned a master’s degree in broadcast news and documentary filmmaking from New York University and a bachelor’s degree in English, government and African American studies from Georgetown University.

Alcindor is represented by WME and attorney Kathleen Conkey.

WETA Washington, D.C., is one of the largest producing stations of new content for public television in the United States. Other WETA productions and co-productions include “PBS NewsHour,” “Washington Week,” “The Kennedy Center Mark Twain Prize,” “The Library of Congress Gershwin Prize for Popular Song” and documentaries by filmmaker Ken Burns and scholar Henry Louis Gates, Jr. Sharon Percy Rockefeller is president and CEO. The WETA studios and administrative offices are located in Arlington, Virginia. More information on WETA and its programs and services is available at www.weta.org.