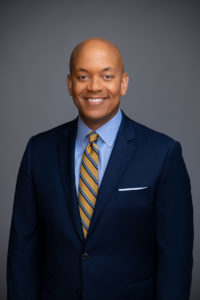 Arlington, VA (November 18, 2021) – Sharon Percy Rockefeller, President and C.E.O. of WETA and President of NewsHour Productions, L.L.C., today announced that Geoff Bennett will join PBS NewsHour as Chief Washington Correspondent on January 3, 2022, and will anchor the PBS NewsHour Weekend beginning in April when production of the program moves to WETA from WNET/New York.

Rockefeller noted, “We are consolidating production of PBS’s nightly news flagship program under WETA and continue to bring new talent to the stellar PBS NewsHour team, building on the strong work of anchor and managing editor Judy Woodruff, executive producer Sara Just and entire NewsHour team. I have long admired Geoff’s work; and he well understands the unique place of public media journalism. We are glad to welcome him and look forward to his new roles with PBS NewsHour.”

“I’m so pleased to see Geoff join the NewsHour family of journalists, after his impressive career covering politics, Washington and New York. He will add yet another layer of seasoning to this team I’m so proud to work with every day,” said Woodruff.

Just added, “I am delighted to welcome Geoff to the NewsHour team. As an accomplished journalist and keen observer of politics, Geoff’s insight and experience will be pivotal to the success of our new weekend programming and strengthen our team overall, as we further our efforts to provide nuanced reporting and thorough understanding, whenever and wherever the audience seeks it, on any platform.”

Bennett added, “I am excited to join PBS NewsHour, a towering news organization with a rich history and a deep sense of its purpose and mission. As the future anchor of its Weekend broadcast, I am looking forward to collaborating with some of the profession’s best, most experienced journalists and contribute to the solid storytelling and reliable reporting that have made NewsHour one of television’s most trusted news programs.”

Bennett will join a strong roster of PBS NewsHour correspondents:

Prior to NewsHour, Bennett was the White House correspondent for NBC News and substitute anchor for MSNBC. He will remain as a contributor for NBC News and MSNBC. He has reported from the White House under three presidents and has covered five presidential elections. At NBC, he covered the Trump and Biden administrations and earned recognition for his in-depth and exclusive reporting on the delivery delays at the U.S. Postal Service. An award-winning political correspondent, Bennett provided extensive and defining coverage of the first Trump impeachment inquiry and the Trump administration’s migrant family separation policy.

Before joining NBC News in November 2017, Bennett covered the Trump White House and Congress for NPR. Prior to that role, he reported on the Obama administration and national politics for NY1 News in New York City and more than a dozen other Time Warner-owned cable news stations across the country.