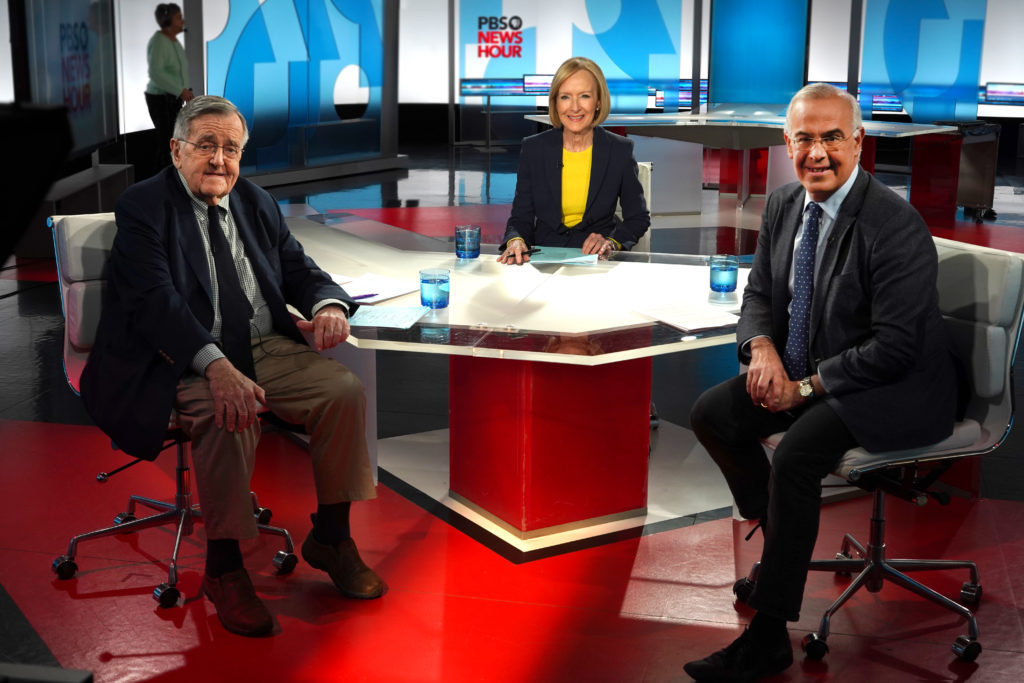 ARLINGTON, VA (December 14, 2020) — After more than 33 years, syndicated columnist Mark Shields will step down on December 18 from the PBS NewsHour’s weekly Shields & Brooks discussion segment. A regular on the NewsHour since 1987, Shields has provided political analysis and commentary on Friday nights and for national conventions and election specials alongside David Brooks since 2001, and previously David Gergen and the Wall Street Journal’s Paul Gigot. Shields will remain with the NewsHour as a senior contributor. His Friday successor has yet to be named.

“For 33 years, thanks to a large risk taken by Jim Lehrer and Robert MacNeil in 1987, I’ve had the best job in Washington journalism,” said Shields. “I am grateful to my PBS colleagues, valued friends, beginning with David Gergen through the last joyful 20 years with David Brooks. To Judy Woodruff — my dear friend since the 1976 Ford-Carter campaign — and to all our dedicated professionals at the PBS NewsHour, this has been, in addition to great fun, the most rewarding professional experience of my, admittedly checkered, career. Finally to the loyal viewers of the NewsHour who have regularly informed, corrected, and encouraged me, thank you.”

Shields’ tenure at the table overlapped with six American presidents and countless political headlines, including the Persian Gulf War, the Iran-Contra affair, 9/11 and the start of the War on Terror. Regular moderators for the weekly segment have included late PBS NewsHour anchor and co-founder Jim Lehrer and PBS NewsHour anchor and managing editor Judy Woodruff.

“It has been one of the great joys of my life at the NewsHour to follow Jim Lehrer in talking with Mark and David every Friday evening,” said Woodruff. “Mark’s encyclopedic knowledge of American politics and history, his sense of humor, fierce love of justice and country, and intolerance for phonies, has earned him a permanent place in our hearts and the hearts of our viewers. We will all miss him terribly and look forward to any future bits of wisdom he wants to drop by to share.”

Sharon Percy Rockefeller, president and CEO of WETA, the producer of PBS NewsHour, added, “Through three decades on PBS NewsHour, Mark has shared thoughtful commentary and insightful analysis with grace, wit and civility, offering illuminating perspective on the news for millions of viewers. We have so appreciated Mark’s engaging on-air contributions, which have enriched the national political dialogue and demonstrated the power and importance of informed public discourse.”

Sara Just, PBS NewsHour executive producer and WETA SVP added, “Mark Shields’ deep insight, good humor and profound humanitarianism come through in all of his commentary on the NewsHour. The audience, and certainly all of the staff, will miss his Friday night analysis and wisdom.”

Shields got his Washington start working as a legislative assistant and speechwriter for Wisconsin Sen. William Proxmire in 1965. He then joined New York Senator Robert F. Kennedy’s presidential campaign in 1968. Shields went on to hold leadership positions in three other presidential campaigns, and over 11 years, helped to manage campaigns up and down the ballot in more than three dozen states. In 1979, he became an editorial writer at The Washington Post and began his column, which is distributed nationally today by Creators Syndicate. He has attended 23 national party conventions and has worked as part of or covered the last 14 presidential elections.

“When Mark called to tell me he was stepping back, I told him the blunt truth: Mark has been the best professional colleague I have ever had at any level of journalism. His compassion, wisdom and friendship have blessed all of us at the NewsHour. He has informed our knowledge of American politics, but more than that he has set a shining standard for how to carry oneself in the world,” said Brooks, a New York Times columnist.

Gergen, a CNN senior political analyst and former advisor to four U.S. Presidents, added, “Since we came together in the mid-80s, my favorite moments in television have always been Friday nights with Mark Shields. There, with Jim Lehrer or Judy Woodruff in the anchor’s chair, Mark demonstrated a 6th sense about politics, a devotion to country and a wicked wit that I shall always treasure.”

From 1988 to 2005, Shields was a moderator and panelist on CNN’s Capital Gang. He was also a regular panelist on Inside Washington, the long-running weekly public affairs show that aired on PBS and ABC, from 2005 – 2013.

Shields has taught American politics and the press at the University of Pennsylvania’s Wharton School and Georgetown University’s Graduate School of Public Policy. He also served as a fellow at Harvard’s Kennedy Institute of Politics. He is the author of “On the Campaign Trail,” his account of the 1984 presidential campaign.

Shields is a native of Weymouth, Mass., a graduate of the University of Notre Dame, and served in the United States Marine Corps. He is married to Anne Shields and they have one daughter, Amy Doyle, and two grandchildren.