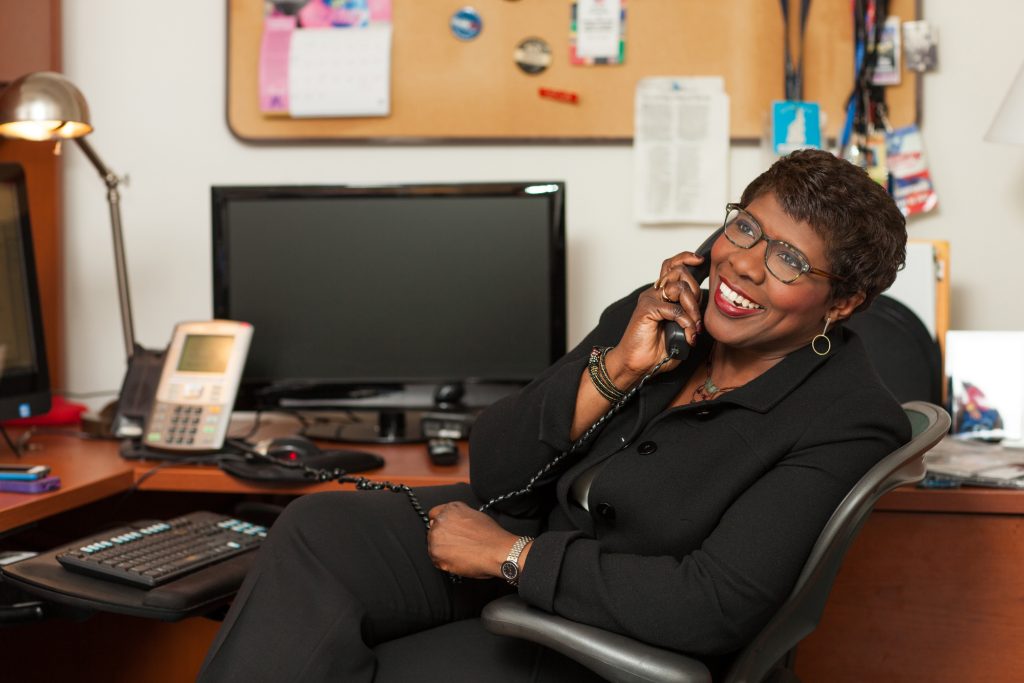 The Fellowship will be Announced Tonight at the Washington Press Club Foundation’s 73rd Annual Congressional Dinner
Washington, DC (March 1, 2017) — The PBS NewsHour and the Washington Press Club Foundation today announce the creation of The Gwen Ifill/PBS NewsHour Journalism Fellowship. The 10-week PBS NewsHour summer fellowship was created in honor of award-winning anchor, reporter, and author Gwen Ifill, the former PBS NewsHour co-anchor and managing editor and Washington Week moderator and managing editor, who died in November 2016 after complications from endometrial cancer. Financially supported by the Foundation, the fellowship will begin annually in June 2017, open to undergraduate and graduate students who demonstrate financial need and are pursuing careers in journalism.
“Gwen Ifill was the best of the best, a remarkable journalist with boundless curiosity, who insisted on the highest standards for herself and her colleagues,” said Sara Just, PBS NewsHour executive producer and WETA SVP. “At a time when the world needs Gwen Ifill more than ever, her passing reminded us just how many seeds she planted through mentorship and friendship with up and coming journalists. We are grateful for the generosity of the Washington Press Club Foundation for the opportunity to honor Gwen’s legacy in this way and guiding young people into practicing journalism with her high standards.”
Margaret Talev, Washington Press Club Foundation board president and Bloomberg News Senior White House Correspondent, added, “We are proud to partner with PBS NewsHour for this special fellowship in memory of a journalist who was a role model for so many in our field. Gwen embodied so much of the core mission of the Washington Press Club Foundation, and it is our intention, with this fellowship, to help train the next generation of journalists to follow in her footsteps.”
Building on the legacy of its predecessor, the Women’s National Press Club, the Washington Press Club Foundation funds opportunities in area newsrooms for students with economic need to pursue careers in journalism. These opportunities supply vital experience for the journalists of tomorrow while providing newsrooms with voices that represent the diversity of their audience. The Gwen Ifill Journalism Fellowship at PBS NewsHour will ensure that the next generation of reporters benefit from the impact that Gwen’s life and work made on the news profession.
Applications to the fellowship will open in March 2017, to be posted to the PBS NewsHour and WETA jobs pages and the Washington Press Club Foundation internships page.
About Gwen Ifill
Gwen Ifill was the best-selling author of “The Breakthrough: Politics and Race in the Age of Obama” (Doubleday, 2009). She covered eight Presidential campaigns and moderated the Vice Presidential debates during the Presidential elections in 2004 and 2008. During the 2008 campaign season, Ifill won the George Foster Peabody Award after bringing Washington Week to live audiences around the country as part of a 10-city tour.
Before joining PBS in 1999, Ifill was chief congressional and political correspondent for NBC News, White House correspondent for The New York Times, and a local and national political reporter for The Washington Post. She also reported for the Baltimore Evening Sun and the Boston Herald American.
A native of New York City and a graduate of Simmons College in Boston, Ifill received more than 25 honorary doctorates. In 2015 she was awarded with the National Press Club’s highest honor, the Fourth Estate Award. She has also been honored for her work by the Radio and Television News Directors Association, Harvard’s Joan Shorenstein Center, The National Association of Black Journalists, Ohio University, and was included in Ebony Magazine’s list of 150 Most Influential African Americans.