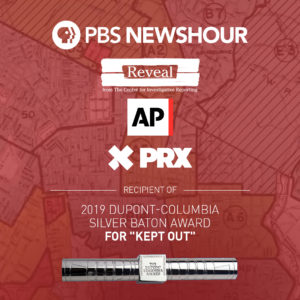 Washington, DC (December 11, 2018) — PBS NewsHour’s two-part reporting series – produced in partnership with Reveal and the Associated Press – today was named a recipient of a duPont-Columbia Silver Baton for “Kept Out,” a Reveal/Associated Press/PRX/PBS NewsHour investigative reporting partnership on the denial of home-related mortgages to people of color also known as redlining. PBS NewsHour’s reports, which aired in February 2018, dialed in on home-related loans for individuals in Philadelphia, and include:

“PBS NewsHour is proud to collaborate with Reveal and the Associated Press on this important reporting and help shine a light on injustices like unfair housing and loan practices,” said Sara Just, PBS NewsHour executive producer and WETA senior vice president. “Non-profit journalism is dedicated to making our communities stronger and more informed. Often that can only be done by the difficult work of investigative journalism, the long hours of the team and the courage of the people who share their stories with us. We are grateful to the duPont-Columbia judges’ recognition of this work.”

“Kept Out” was based on a year-long analysis of 31 million mortgage records. It found that in 61 cities across America people of color were more likely to be turned down for a loan, even when they made the same amount of money, tried to take out the same size loan, and wanted to buy in the same neighborhood as their white counterparts.

Kevin Sullivan, interim editor in chief of Reveal from The Center for Investigative Reporting, added, “This investigation showed that 50 years after the Fair Housing Act, people of color still face incredible barriers to becoming homeowners. In a country where home ownership is one of the primary means to build wealth, this lack of access to loans is keeping people from climbing up the economic ladder.”

“Kept Out” aired in February as an hour-long radio documentary on Reveal’s radio program and podcast and as a two-part series on the NewsHour. It was reported by Aaron Glantz and Emmanuel Martinez with production support from Reveal’s Katharine Mieszkowski and Rachel de Leon and PBS NewsHour EP Sara Just, Senior Producer Richard Coolidge, and field producers Jaywon Choe and Leah Nagy. The Associated Press partnered on the data analysis, distributed a series of print stories to its members, along with customized local data about lending disparities in each market. More than 25 newspapers, including the Detroit News, Tulsa World, and Virginian Pilot, ran the story on the front page.

Founded in 1942, the duPont-Columbia Awards – administered by the Columbia Journalism School – uphold the highest standards in journalism by honoring winners annually, informing the public about those journalists’ contributions and supporting journalism education and innovation, thereby cultivating a collective spirit for the profession. There are a total of sixteen 2019 Alfred I. duPont-Columbia Award recipients. The awards will be presented at the 77th annual ceremony on Tuesday, January 22, 2019 in New York City.

The last time the NewsHour received a duPont-Columbia Award was in 1976. Earlier this year, PBS NewsHour’s 2017 series “Inside Putin’s Russia” was named a recipient of a Peabody Award.

Reveal, heard on more than 470 public radio stations weekly and as a podcast, is produced by The Center for Investigative Reporting and PRX. Founded in 1977, CIR is the nation’s first nonprofit investigative newsroom.

About the Associated Press

The Associated Press is the essential global news network, delivering fast, unbiased news from every corner of the world to all media platforms and formats. Founded in 1846, AP today is the most trusted source of independent news and information. On any given day, more than half the world’s population sees news from AP. On the web: www.ap.org.

PRX is shaping the future of media content, talent and technology. PRX creates, distributes and connects audio producers with their most engaged, supportive audiences across broadcast, digital and mobile platforms, reaching millions of weekly listeners worldwide. A fierce champion of new voices, innovative technology and new business models, PRX advocates for the entrepreneurial producer. For over a dozen years, PRX has operated public radio’s largest distribution marketplace, offering thousands of shows, including “This American Life,” “The Moth Radio Hour” and “Reveal.”

Hannah Young, Reveal from The Center for Investigative Reporting
hyoung@revealnews.org