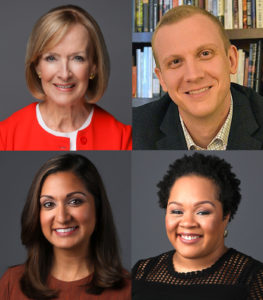 “Judy Woodruff has incomparable experience moderating debates and demonstrates her fairness in probing interviews every day on the PBS NewsHour” said Sara Just, executive producer of PBS NewsHour. “I’m delighted that she will be joined on the debate stage by such accomplished and evenhanded journalists, including NewsHour’s Amna Nawaz and Yamiche Alcindor.”

“We are thrilled to partner with PBS NewsHour and are committed to leveraging the depth of POLITICO’s newsroom to produce a substantive, interesting, and informative debate for voters,” said Carrie Budoff Brown, editor of POLITICO. “Tim Alberta is one of the sharpest and most insightful reporters of his generation and will bring a thoughtful, unique, and fair-minded approach to the moderating panel.”

“As one of the nation’s most trusted and respected news operations, PBS NewsHour will bring trademark integrity and balance to bear in eliciting candidates’ views on key Election 2020 issues,” said Sharon Percy Rockefeller, President and CEO of WETA, the producer of PBS NewsHour. “We look forward to partnering with POLITICO to facilitate an illuminating, engaging debate that will enrich the national political dialogue and reflect PBS NewsHour’s mission to foster an informed citizenry.”

Produced in partnership between PBS NewsHour and POLITICO, the DNC-sanctioned debate will take place at Loyola Marymount University on Thursday, December 19, 2019.

The moderator headshots can be found here. Bios are below:

Broadcast journalist Judy Woodruff is the anchor and managing editor of the PBS NewsHour. She has covered politics and other news for more than four decades at NBC, CNN and PBS.

At PBS from 1983 to 1993, she was the chief Washington correspondent for the MacNeil/Lehrer NewsHour. From 1984 – 1990, she also anchored PBS’ award-winning documentary series, “Frontline with Judy Woodruff.” Moving to CNN in 1993, she served as anchor and senior correspondent for 12 years; among other duties, she anchored the weekday program “Inside Politics.” She returned to the NewsHour in 2007, and in 2013, she and the late Gwen Ifill were named the first two women to co-anchor a national news broadcast. After Ifill’s death, Woodruff was named sole anchor.

In 2011, Judy was the anchor and reporter for the PBS documentary “Nancy Reagan: The Role of a Lifetime.” And in 2007, she completed an extensive project on the views of young Americans, titled “Generation Next: Speak Up. Be Heard.” Two hour-long documentaries aired on PBS, along with a series of reports on the NewsHour with Jim Lehrer, NPR, in USA Today and on Yahoo News.

At NBC News, Woodruff was White House correspondent from 1977 to 1982. For one year after that she served as NBC’s Today Show chief Washington correspondent. She wrote the book, This is Judy Woodruff at the White House, published in 1982 by Addison-Wesley. Her reporting career began in Atlanta, Georgia, where she covered state and local government.

Woodruff is a founding co-chair of the International Women’s Media Foundation, an organization dedicated to promoting and encouraging women in journalism and communication industries worldwide. She serves on the boards of trustee of the Freedom Forum, The Duke Endowment and the Carnegie Corporation of New York, and is a director of Public Radio International and the National Association to End Homelessness. She is a former member of the Knight Commission on Intercollegiate Athletics, a former director of the National Museum of American History and a former trustee of the Urban Institute.

Judy is a graduate of Duke University, where she is a trustee emerita.

She is the recent recipient of the Radcliffe Medal, the Poynter Medal for Lifetime Achievement in Journalism, the Gwen Ifill Press Freedom Award from the Committee to Protect Journalists and the Cronkite Award for Excellence in Journalism from Arizona State University. She received the Edward R. Murrow Lifetime Achievement Award in Television from Washington State University, the Gaylord Prize for Excellence in Journalism and Mass Communication from the University of Oklahoma and the Al Neuharth Award for Excellence in the Media from the University of South Dakota. She was inducted into the Georgia Association of Broadcasters Hall of Fame and received the Leonard Zeidenberg First Amendment Award from the Radio Television Digital News Association and the Duke Distinguished Alumni Award, among others.

She is the recipient of more than 25 honorary degrees.

Judy lives in Washington, DC, with her husband, journalist Al Hunt, and they are the parents of three children: Jeffrey, Benjamin and Lauren.

Tim Alberta is chief political correspondent for POLITICO where his longer form work is often published in the publication’s magazine. Tim is widely recognized as one of the most skilled political reporters of his generation, covering a range of topics, including: the Trump presidency; Capitol Hill; the ideological warfare between and within the two parties; demographic change in America; and the evolving role of money in elections. Based in Michigan and tasked with roving widely across battleground states, Tim will soon begin a “Letter to Washington,” featured 2020 dispatch highlighting stories, trends, and people from outside the political bubble for the political bubbles.

Prior to joining POLITICO, Tim had extensive experience at National Journal, where he covered Congress as House leadership reporter and later reported on campaigns as the publication’s senior political correspondent. In addition, he served as senior editor of The Hotline, and has reported for both The Wall Street Journal and covered the 2016 campaign for National Review. Tim’s work has been featured in dozens of other publications nationwide, including Sports Illustrated and Vanity Fair, and he frequently appears as a commentator on political television programs in the United States and around the world. His 2019 book, American Carnage: On the Front Lines of the Republican Civil War and the Rise of President Trump, debuted at No. 2 on the New York Times best-seller list. He lives in his native Michigan with his wife, three sons and German Shepherd.

Prior to joining the NewsHour, Nawaz was an anchor and correspondent at ABC News, anchoring breaking news coverage and leading the network’s digital coverage of the 2016 presidential election. Before that, she served as a foreign correspondent at NBC News, reporting from Pakistan, Afghanistan, Syria, Turkey, and the broader region. She is also the founder and former managing editor of NBC’s Asian America platform, built to elevate the voices of America’s fastest-growing population.

At the NewsHour, Nawaz has reported politics, foreign affairs, education, climate change, culture and sports. Her immigration reporting has taken her to multiple border communities in Texas, New Mexico, Arizona, and Mexico. She’s investigated the impact of the Trump Administration’s immigration policies, including following the journey of a single toddler as she left her home in Mexico, was separated from her family at the U.S. border, and later reunited with her family several weeks later. She also regularly covers issues around detention, refugees and asylum, and migrant children in U.S. government custody.

Domestically, her reporting has taken her to Appalachia to cover healthcare and the economy, the Pacific Northwest to cover gentrification and discrimination in housing, and communities across the country to take the political pulse of the nation. Internationally, she’s traveled to Brazil to report on climate change from within the Amazon, and the Venezuelan refugee crisis.

In 2019, her reporting as part of a NewsHour series on the global plastic problem was the recipient of a Peabody Award.

While at ABC News, Nawaz reported the documentary, “Roberts County: A Year in the Most Pro-Trump Town,” following four families’ lives over President Trump’s first year in office, and hosted the podcast series, “Uncomfortable,” featuring in-depth, one-on-one conversations with thought leaders on the issues dividing America.

Earlier, at NBC News, her work appeared on NBC Nightly News, The Today Show, Dateline NBC, MSNBC, and MSNBC.com. She was NBC’s Islamabad Bureau Chief and Correspondent for several years, and was the first foreign journalist allowed inside North Waziristan, the then-global hub of Al Qaida and the Taliban. She covered the Taliban attack on Malala Yousafzai, the U.S. raid on Osama bin Laden’s compound, and broke news in a series of exclusive reports on the impact of U.S. drone strikes. Nawaz reported for the network’s investigative unit, covering the U.S. housing crisis and the BP oil spill, and also covered the election and inauguration of Barack Obama, the earthquake in Haiti, and Hurricane Katrina.

Nawaz began her career as a Nightline Fellow at ABC News. When the Sept. 11 attacks happened just weeks into her first job, Nawaz was given the opportunity to work on one of the most important news events in recent times, which set the precedent for the rest of her career.

Nawaz has also been honored with an Emmy Award for the NBC News Special “Inside the Obama White House,” a Society for Features Journalism Award, and was a recipient of the International Reporting Project fellowship in 2009. She earned a bachelor’s degree from the University of Pennsylvania, where she captained the varsity field hockey team, and later earned her master’s degree from the London School of Economics.

She lives with her husband and two daughters in the Washington, D.C. area.

Yamiche Alcindor is the White House correspondent for the PBS NewsHour, a role she began in January 2018. She often tells stories about the intersection of race and politics as well as fatal police encounters.

Alcindor is also a contributor for NBC News and MSNBC often appearing on a number of shows including Morning Joe, Andrea Mitchell Reports, The Rachel Maddow Show, Hardball with Chris Matthews, and Meet the Press with Chuck Todd.

Previously, Alcindor worked as a national political reporter for The New York Times where she covered the presidential campaigns of Mr. Trump and Senator Bernie Sanders as well as Congress. She also wrote about the impact of President Donald Trump’s policies on working class people and people of color.

Before joining The Times, she was a national breaking news reporter for USA Today and traveled across the country to cover stories including the school shooting in Newtown, Conn., the death of Trayvon Martin in Sanford, Fla. and the police related protests in Ferguson, Mo. and Baltimore, Md.

Alcindor’s overall goal is to be a civil rights journalist and she was inspired by the late PBS NewsHour anchor Gwen Ifill. In 2017, she won an award in a tribute to Ifill during Syracuse University’s Toner Prize ceremony. She is a member of the National Association of Black Journalists and was named the organization’s “Emerging Journalist of the Year” in 2013.

Alcindor earned a master’s degree in broadcast news and documentary filmmaking from New York University and a bachelor’s in English, government and African American studies from Georgetown University. A native of Miami, Fla., Yamiche is married to a fellow journalist and is the daughter of Haitian immigrants who met while attending Boston College.