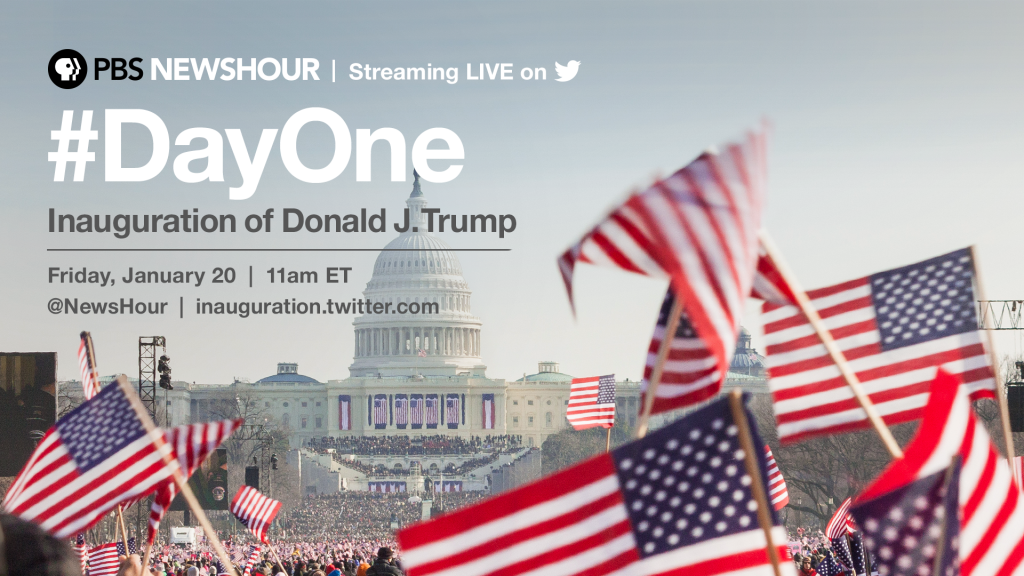 Washington, DC and San Francisco, CA (January 12, 2017) — PBS NewsHour in partnership with Twitter will live stream special coverage of Inauguration Day 2017 on Twitter from 11am – 5pm ET on Friday, January 20, 2017. The special broadcast will be anchored by managing editor Judy Woodruff, with NewsHour correspondents John Yang reporting from the steps of the U.S. Capitol and Lisa Desjardins from the National Mall. NewsHour’s livestream will include the swearing in of the 45th President of the United States Donald J. Trump and the 48th Vice President of the United States Mike Pence on the steps of the U.S. Capitol, the Inaugural Address and Parade, and the arrival of President-elect Trump at the White House.

NewsHour’s broadcast coverage will live stream on Twitter globally at inauguration.twitter.com and @NewsHour and will be available to both Twitter’s logged-in and logged out audience.

“We are delighted to partner with Twitter for Inauguration Day coverage,” said Sara Just, NewsHour’s executive producer and WETA SVP. “The peaceful transition of power from one president to the next is a powerful moment in the American democratic process. And this year, it comes at a time when the country is embroiled in political discourse like we have rarely seen. Streaming public broadcasting’s thoughtful coverage on Twitter will allow more Americans to experience the inauguration and join in discussion around it.”

Anthony Noto, COO at Twitter, added, “Twitter is where news and politics are discussed in real time every day, and we’re excited to collaborate with PBS NewsHour around this historic event to bring public broadcasting’s live coverage to Twitter. NewsHour’s broadcast will integrate dependable, thorough coverage with the live Inauguration Day conversation on Twitter.”

PBS is Twitter’s exclusive live streaming partner for Inauguration Day. As part of the live stream, comprehensive sponsorship packages will be available via Twitter.

Twitter, Inc. (NYSE: TWTR) is what’s happening in the world right now. From breaking news and entertainment to sports and politics, from big events to everyday interests. If it’s happening anywhere, it’s happening first on Twitter. Twitter is where the full story unfolds with all the live commentary and where live events come to life unlike anywhere else. Twitter is available in more than 40 languages around the world. The service can be accessed at Twitter.com, on a variety of mobile devices and via SMS. For more information, visit about.twitter.com or follow @twitter.