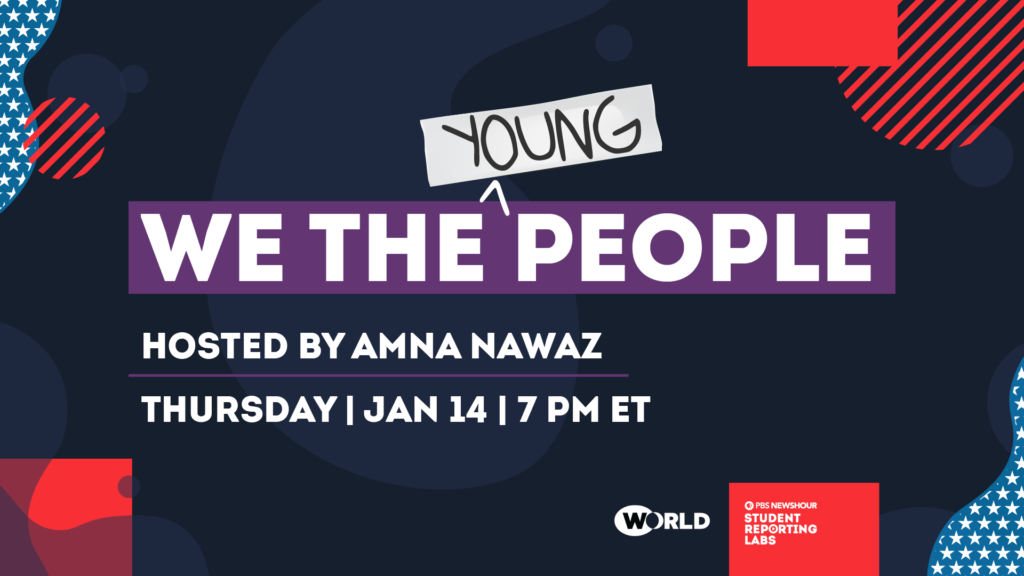 More young adults voted in the 2020 election than in any other election in history, according to the Center for Information & Research on Civic Learning and Engagement (CIRCLE) at Tufts University.

We the (Young) People will highlight the impact of young voters and explore the change they want to see from the new U.S. presidential administration.

The show will be hosted by Amna Nawaz, senior national correspondent and primary substitute anchor for the PBS NewsHour, and feature teen voices and youth-selected topics designed to connect with new audiences and deepen conversations about the most pressing issues facing the country.

“I hope that you know that this generation is one set on accountability with the power of social media and other tools,” says Janice Aragon of Brentwood High School in New York, directly addressing president-elect Joe Biden. “Gen Z is ready to stand together [and] I really hope that you can restore our faith in [our government] during your term.”

“This special will continue to create a space for young people to engage in the critical issues they are facing after an historic election and how to be more confident in navigating news and information online,” said Elis Estrada, SRL’s senior director.

“At WORLD Channel, we look to share the voices and thoughts from individuals who aren’t always represented in mainstream media,” says Chris Hastings, executive producer for WORLD Channel at GBH in Boston. “We are proud to work with PBS NewsHour to share the voices of young voters, highlighting their concerns and hopes for the future, with audiences across the nation.”

The livestream will feature conversations with young people about how to spot misinformation and engage in the democratic process as they’re watching the future unfold and witnessing their vote carry impact in the new presidential administration. The show will culminate with Nawaz taking live questions from viewers.

The event is free and open to the public — register on Eventbrite.

This special town hall was made possible with support from WORLD Channel.

Now in over 160 middle and high schools, Student Reporting Labs (SRL) is a national youth journalism program and public media initiative that trains teenagers across the country to produce stories that highlight the achievements, challenges, and reality of today’s youth. SRL creates transformative educational experiences through video journalism that inspires students to find their voice and engage in their communities. Since 2009, SRL youth media producers have helped students place over 100 video news reports on PBS NewsHour’s nightly broadcast and more on local media outlets. SRL is supported by the Corporation for Public Broadcasting, a private corporation funded by the American people, and the MacArthur Foundation. Visit www.studentreportinglabs.org to learn more.

For more than 40 years, millions of Americans and citizens of the world have turned to the PBS NewsHour for the solid, reliable reporting that has made it one of the most trusted news programs on television. PBS NewsHour is a production of NewsHour Productions LLC, a wholly-owned non-profit subsidiary of WETA Washington, DC, in association with WNET in New York. More information on PBS NewsHour is available at www.pbs.org/newshour. On social media, visit PBS NewsHour on Facebook or follow NewsHour on Twitter.

WORLD shares the best of public media in news, documentaries and programming. WORLD’s original series examine the issues and amplify the voices of those often ignored by mainstream media. The multicast 24/7 channel helps audiences understand conflicts, movements and cultures from around the globe. Its original work has won a Peabody Award, an Alfred I. duPont-Columbia Award, a National News and Documentary Emmy Award and many others honoring diversity of content and makers. WORLD is carried by 176 member stations in markets representing over 70% of US TV households. Funding for WORLD Channel is provided by the Corporation for Public Broadcasting, the John D. and Catherine T. MacArthur Foundation, Wyncote Foundation and the National Endowment for the Arts and Artworks. WORLD is produced by GBH in partnership with WNET and is distributed by American Public Television (APT). Find out more at WORLDChannel.org.