To witness the basis of the 2016 Nobel Physics Prize, look at tornadoes. In nature, you may see one or two tornadoes, but you’ll never find a half or two-thirds of a twister. Tornadoes exist as whole objects or nothing at all. This principle of moving from one whole state to the next is called topology.

On Tuesday, three physicists — David Thouless of the University of Washington, Duncan Haldane of Princeton University, and Michael Kosterlitz of Brown University — won the Nobel award for showing that topology can apply to atoms and other tiny matter within the quantum universe.

By mapping out this quantum topology, their work has led to many modern materials and may bring society closer to the age of quantum computers.

“Today’s technologies, take for instance our computers, rely on our ability to understand and control the properties of the materials involved,” said Nils Mårtensson, acting chairman of the Nobel committee. “This year’s Nobel laureates, in their theoretical work, have discovered a set of totally unexpected regularities in the behavior of matter. This has paved the way in designing new materials.” 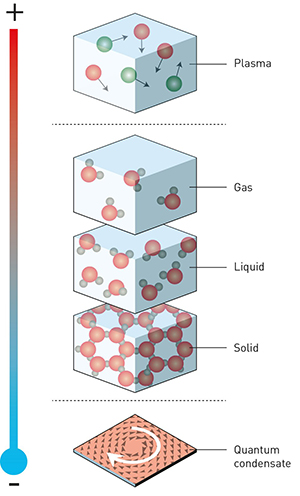 The most common phases are gas, liquid and solid matter. However, in extremely high or low
temperatures matter assumes other, more exotic states. Photo and caption by Johan Jarnestad/The Royal Swedish Academy of Sciences

The winners’ journey to a Nobel started in the late 1980s by using math to explain a funny quirk in matter — the solids, liquids, gases and plasma that make up the physical world — in the late 1980s. When you cool a gas, you get a liquid. Reduce the temperature further, and a solid appears as the particles condense into a more ordered state. Physicists describe this effect as changing the phase of matter.

But “when you lower temperatures even more, you get new fascinating states of matter,” said Thors Hans Hansson, a Stockholm University physicist and Nobel Assembly member.

Hansson explained: On the early morning of Feb. 5, 1980, German physicist Klaus von Klitzing was examining an ultrathin piece of silicon, which he had supercooled and exposed to a high magnetic field, when he noticed something new. When von Klitzing ran an electric current through the silicon, it conducted the juice in precise whole amounts. Von Klitzing either saw nothing, one whole bit of electricity, two whole bits of electricity and so on. Von Klitzing won the 1985 Nobel Prize in physics for discovering this phenomenon, which is called the quantum Hall effect.

For this to happen, the silicon must have switched physical states, but mathematicians had already reasoned that such changes in matter were impossible, because the sheet of silicon was so thin. They believed the atoms had no room to move, which is a requirement for phase transitions.

But a decade after Klitzing’s experiment, David Thouless and Michael Kosterlitz had thought otherwise. They proposed that rather than move up or down, the silicon atoms in the sheet were swirling like a tornado or vortex.

Using topology, Kosterlitz and Thouless described a topological phase transition in a thin layer of very cold matter. In the cold,
vortex pairs form and then suddenly separate at the temperature of the phase transition. Photo and caption by Johan Jarnestad/The Royal Swedish Academy of Sciences

“This cooperation resulted in an entirely new understanding of phase transitions, which is regarded as one of the 20th century’s most important discoveries in the theory of condensed matter physics,” the Nobel Committee wrote in a summary. “It is called the KT transition (Kosterlitz-Thouless transition) or the BKT transition, where the B is for Vadim Berezinskii, a now deceased theoretical physicist from Moscow who had presented similar ideas.”

In 1982, Thouless worked out the math behind the Hall effect and how these spinning transitions relied on topology. (For that, he wins half of the $973,000 prize, while the others split the remainder). Later, he and Kosterlitz would experimentally show how these transitions occur with an ultrathin piece of helium. At the lowest temperatures, the atoms make pairs of tornadoes that spin in opposite directions. But as the temperatures rise, they form single spinning blobs.

“I’m a bit British, or phlegmatic, about these things so I didn’t faint or anything” Duncan Haldane on being informed about the #NobelPrize

Haldane, who had been collaborating with Thouless around the same time, learned you could omit the strong magnetic field, and still see the Hall effect. The real key is temperature. Haldane also found that the Hall effect applied to sheets or single chains of magnetic atoms.

“It taught us that quantum mechanics can behave far more strangely than we could guess,” Haldane said via a phone call with the Nobel Assembly. “These discoveries show that we have a long way to go to discover what’s possible.”

This branch of mathematics is interested in properties that change step-wise, like the number of holes in the above objects. Topology was the key to the Nobel Laureates’ discoveries, and it explains why electrical conductivity inside thin layers changes in integer steps. Photo and caption by Johan Jarnestad/The Royal Swedish Academy of Sciences

Haldane described his early theoretical work as “a toy model” that he didn’t think would apply to real-life situation. But this toy model now underlies graphene materials, magnetic films and the design of ultracool superconductors — many of which form the basis of modern electronics.

“The concepts that led – and continue to lead — to the discovery and understanding of the states of matter are generating breakthroughs at the forefront of materials,” said France Córdova, director of the National Science Foundation, which funded the winners’ research through much of their careers. “And Thouless, Haldane and Kosterlitz have been leading what many would consider a revolution that begins with the most fundamental research.”

Being able to manipulate step-by-step transitions on this minuscule scale may ultimately serve the hunt for a quantum computer, where individual particles would require precise and predictable control.