Jacques Dubochet, Joachim Frank and Richard Henderson have won the 2017 Nobel Prize in chemistry for developing a way to image biomolecules at cold temperatures.

Cryo-electron microscopy — or cool microscopy — transformed biology and medicine because it can take snapshots of our body’s materials, like proteins, which are constantly moving at rapid speeds.

The technique allowed scientists to figure out how drugs interact with components of our cells and exposed the most intimate corners of our cells on an atomic level.

Who are the winners? Dubochet, 75, is a Swiss biophysicist who currently conducts his research at University of Lausanne in Lausanne, Switzerland. Frank, 77, is a German-born American biophysicist at Columbia University in New York City.

Henderson, 72, is a Scottish biophysicist who has worked at or directed Cambridge University’s Laboratory of Molecular Biology since 1973. The Nobel committee stated Henderson is the 15th Nobel laureate from this lab.

What they did: Early in the 20th century, scientists knew the key to understanding the fundamentals of biology — DNA, proteins — would be observing those molecules in 3-D. X-rays revealed the structure of DNA in the 1950s, but that’s because the DNA molecules can organize themselves into easily observable crystals. Many biological molecules lack this ability.

In the early 1930s, physicist Ernst Ruska and engineer Max Knoll invented the electron microscope that could view objects 400 times smaller than what was capable with the naked eye. Electrons have smaller wavelengths than light, so can squeak in-between ultrasmall structures and illuminate them.

But these microscopes bombard their targets with high-energy electrons, which typically move biological structure or rip them apart entirely. Electron microscopy is also conducted in a vacuum, which is problematic for imaging cells in their natural state. Vacuum boils away water, which makes up 70 percent of a cell.

For decades, biologists tried to ply electron microscopy to their trade, but the best attempts ended up taking 2D photos of objects — like viruses — and then using those to build 3D models.

Henderson and his colleague Nigel Unwin made a breakthrough in the mid-1970s, when they were able to prepare protein specimens at room temperature. They swapped water with a sugar cocktail, which could withstand the vacuum and systematically tweaked the settings of their microscope to limit the damage caused by the electrons.

Over the last few years, researchers have published atomic structures of numerous complicated protein complexes, such as this one that governs circadian rhythm (left), a pressure sensor pressure in the ear used for hearing (middle) and the Zika virus (right). Image by Johan Jarnestad/The Royal Swedish Academy of Sciences

Their persistence paid off when they captured a 3D map of bacteriorhodopsin, a protein pump used by single-celled microorganisms, in 1975. The resolution was low — another hurdle inherent to biological material — but it was a start.

Concurrently, others had been engineering better lenses and experimenting with rapidly cooling biospecimens with liquid nitrogen, which preserved the liquid’s interactions with proteins. Henderson spent years traveling the world to take images of bacteriorhodopsin with best electron microscopes, and finally in 1990, presented a picture of the protein with atomic resolution.

But Henderson had an advantage the entire time. Bacteriorhodopsin packs itself into neat, organized groups. Most other proteins, by contrast, are disorderly, asymmetrical and filled with randomly positioned particles.

Joachim Frank’s strategy built upon having a computer discriminate between the traces of randomly positioned proteins and their background in a fuzzy electron microscope image. Image and caption by Johan Jarnestad/The Royal Swedish Academy of Sciences

Enter Joachim Frank: He used math and computers to decipher the randomness in protein structures. His algorithms captured thousands of angles and traces of individual proteins, spotting consistent patterns among the noise. The result was high-resolution 2D images, which could be adapted to make sharper 3-D models of biological structures. The image processing became a cornerstone of cryo-electron microscopy

Dubochet entered the fray in the 1980s by creating a faster method for cooling water. Henderson’s sugar cocktail worked for things that dissolved readily in water, but less well for hydrophobic biomolecules like fats, lipids and some proteins. But water freezes at low temperatures, creating crystals that alter natural bioarchitecture.

So Dubochet’s lab spread their water-based samples across a thin metal grid, leading individual droplets to fill each hole. Using a combination of ethane and liquid nitrogen, his team was able to vitrify the water — turn it into a glass — which has no crystals. This technique, which is still in use today, permitted cryo-electron microscopy on DNA, viruses and other biospecimens sitting in pure water.

Why it matters: Cryo-electron microscopy is like a polaroid camera. Scientists and doctors have used the method to figure out when and where drugs interact with our cells. The technique revealed which proteins allow cancer cells to evade chemotherapy and identified the Zika virus. 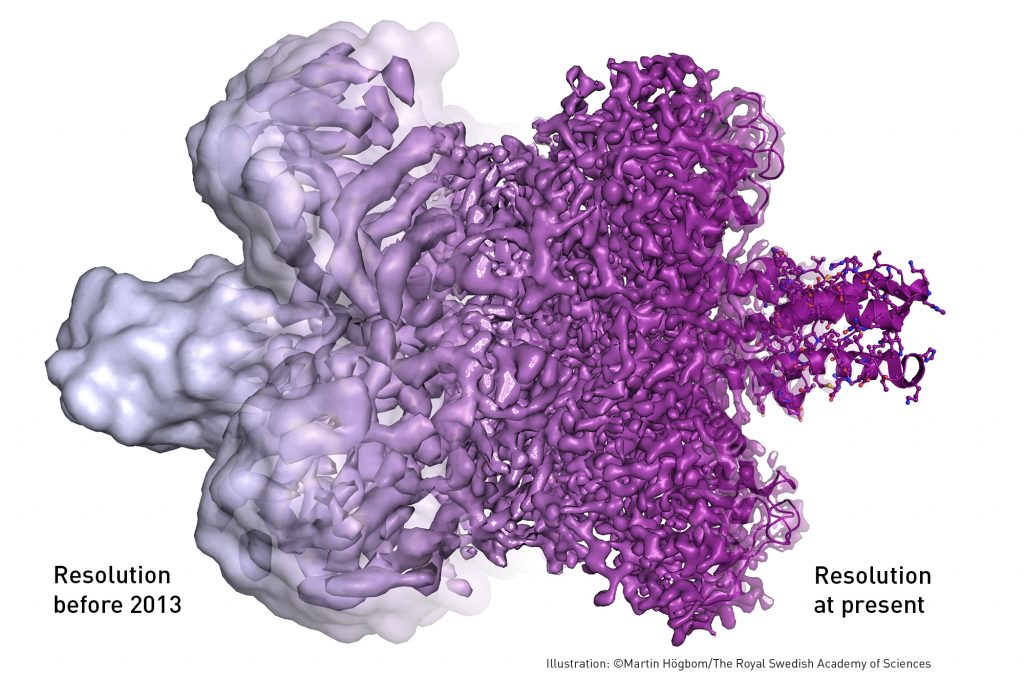 The electron microscope’s resolution has radically improved in the last few years, from mostly showing shapeless blobs to now being able to visualize proteins at atomic resolution. Image and caption by Martin Högbom/The Royal Swedish Academy of Sciences

Their work is also great example of the multifaceted nature of basic research. By calling on thermodynamics, biology, computer science, the collective work of Henderson, Frank, Dubochet and others turned cryo-electron microscopy into a pillar of modern biochemistry.

Left: Jacques Dubochet, Joachim Frank and Richard Henderson have won the 2017 Nobel Prize in chemistry for developing a way to image our cells and biomolecules at cold temperatures. Illustration by Nobel Media. Ill. N. Elmehed