25 years of the Hubble telescope in 25 stunning photos

Hubble’s contributions to space exploration are countless. Its images, explains Hubble Space Telescope Senior Project Scientist Jennifer Wiseman, have shown the first definitive detection of supermassive black holes at the centers of galaxies. They also have provided measurement of the expansion rate of the universe, and detection (along with ground-based telescopes) of acceleration in that expansion, caused by mysterious “dark energy” that appears to be pushing the universe apart.

“Hubble will go down in history as having changed the textbooks by totally revolutionizing humanity’s view of the universe, and our place in it,” Wiseman says. “It has also shown us exquisite beauty in the universe, in everything from galaxies to glowing nebulae to planetary atmospheres in our own solar system.” 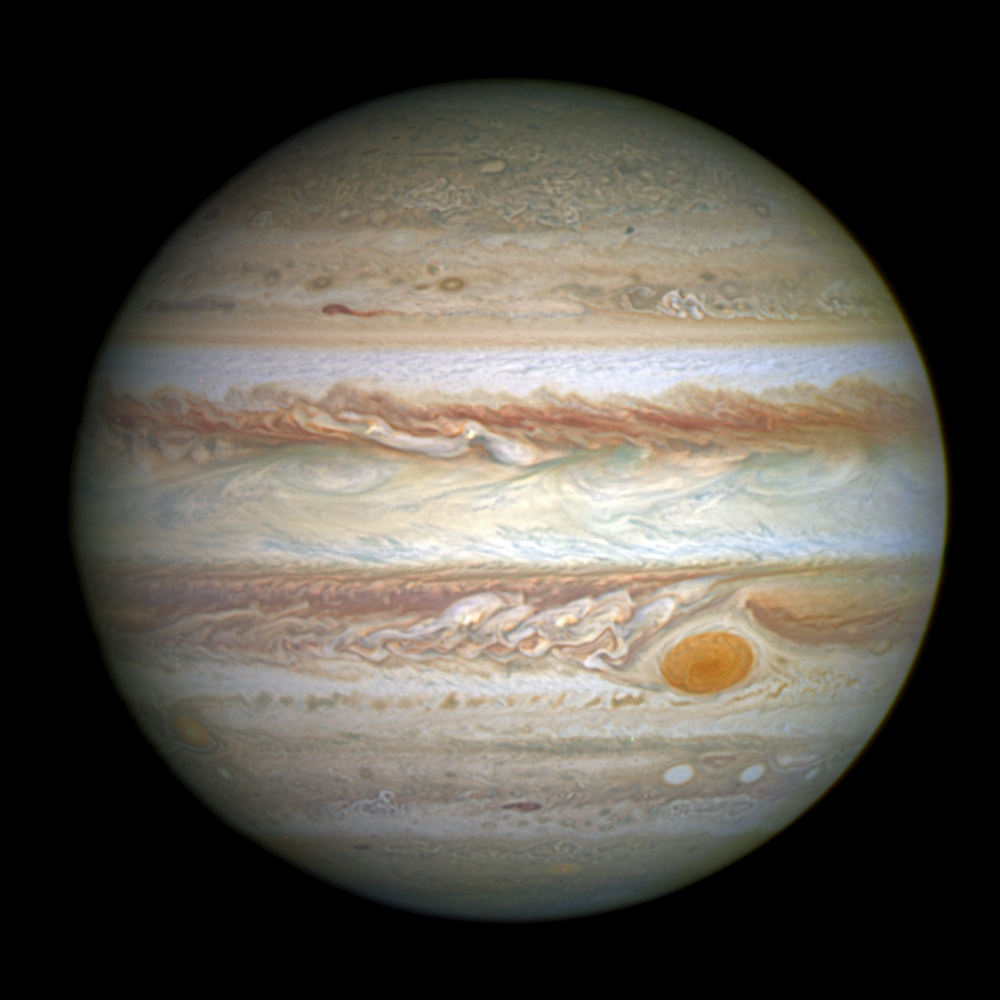 Jupiter, with its trademark Great Red Spot, photographed by Hubble on May 15, 2014. Photo by NASA, ESA and A. Simon (Goddard Space Flight Center)

Currently weighing 27,000 lbs. (almost twice the size of a large African elephant), extending 13.3 meters (the length of a large school bus), Hubble has captured more than 1.2 million images. The low-orbit telescope does this with two mirrors that are tucked into the apparatus. Powered by the sun, it takes a mere 95 minutes for the telescope to complete its orbit around the earth, traveling about 17,000 mph at an altitude of 340 miles.

All week, NASA is marking the anniversary with events showcasing the telescope’s achievements in space exploration. Images taken over the past 25 years will be broadcast all week in New York’s Time Square; The Smithsonian’s National Air and Space Museum in Washington will host a panel Saturday featuring NASA astronauts, scientists and engineers; and the IMAX movie “Hubble 3D” is now showing at select theaters across the U.S.

Enjoy some of the telescope’s most iconic images, including its very first, from May 20, 1990. 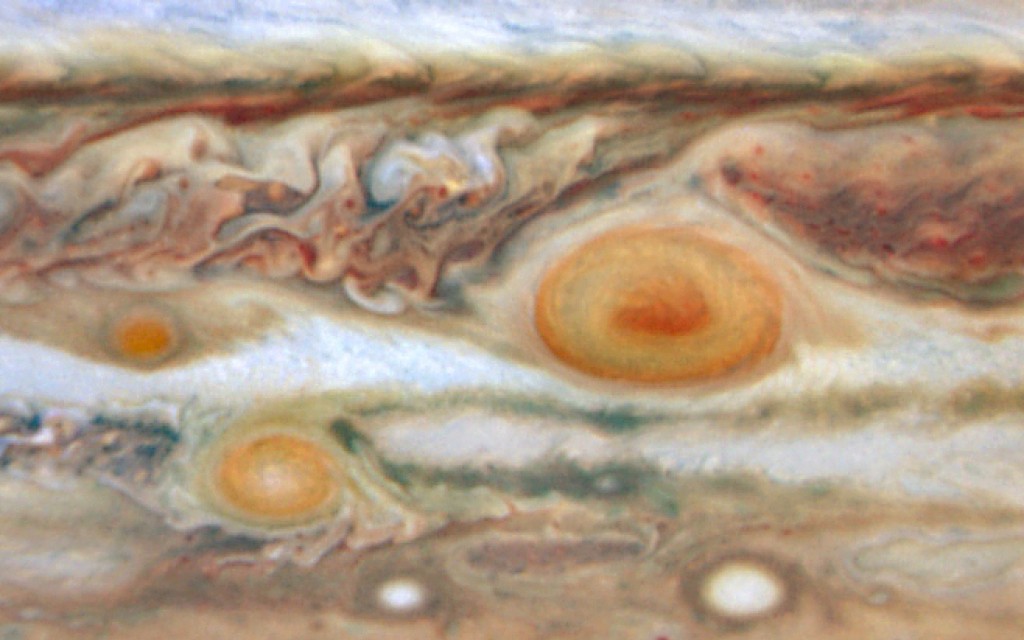 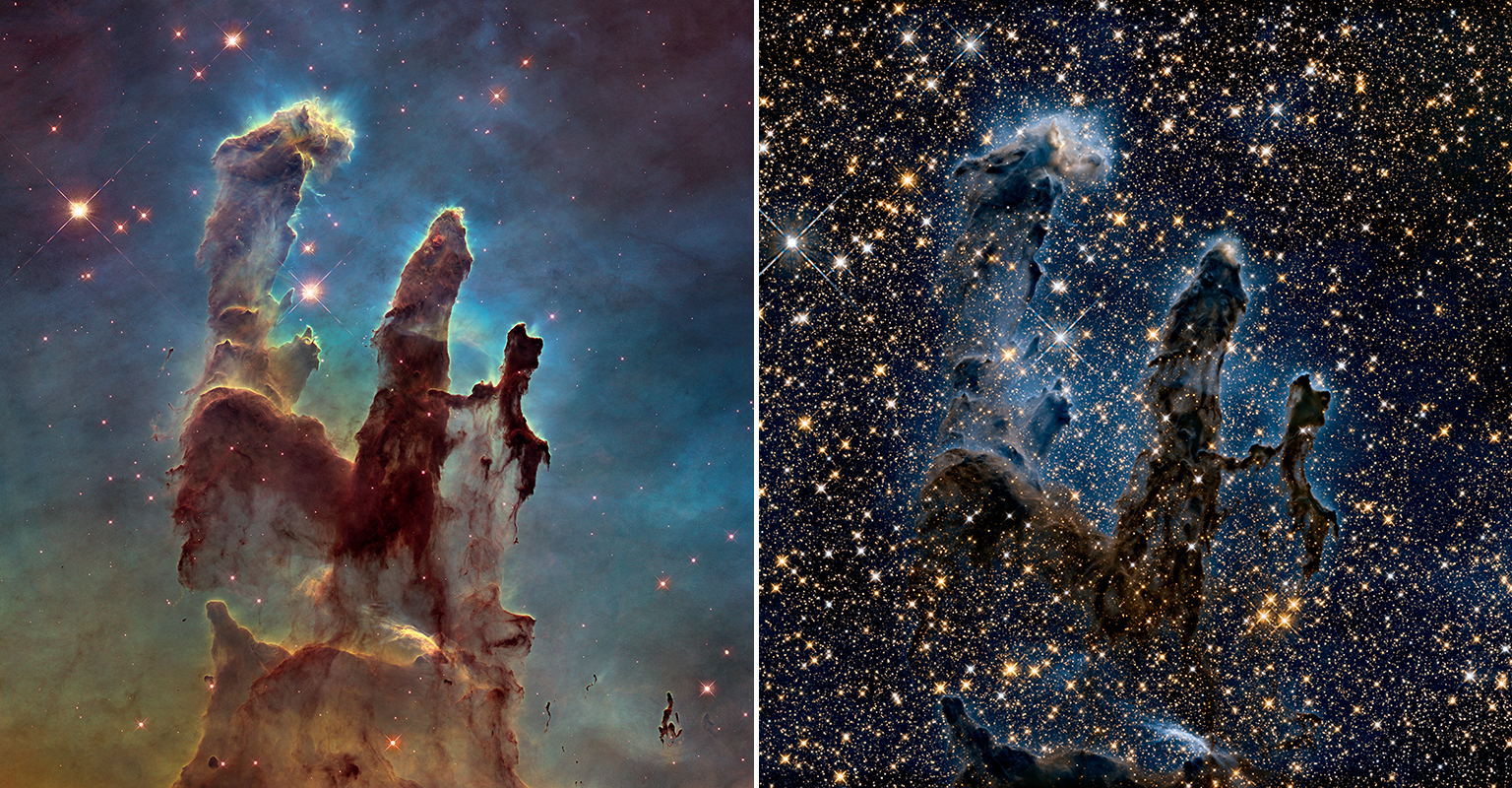 At left, Hubble revisited its iconic “Pillars of Creation” image with this sharper and wider view of pillars in the Eagle Nebula. The towering pillars are about five light-years tall. Stars are being born deep inside the pillars, which are made of cold hydrogen gas laced with dust. At right, a near-infrared view of the pillars. Read more from NASA on the Pillars of Creation. Photo by NASA, ESA, and M. Livio and the Hubble 20th Anniversary Team 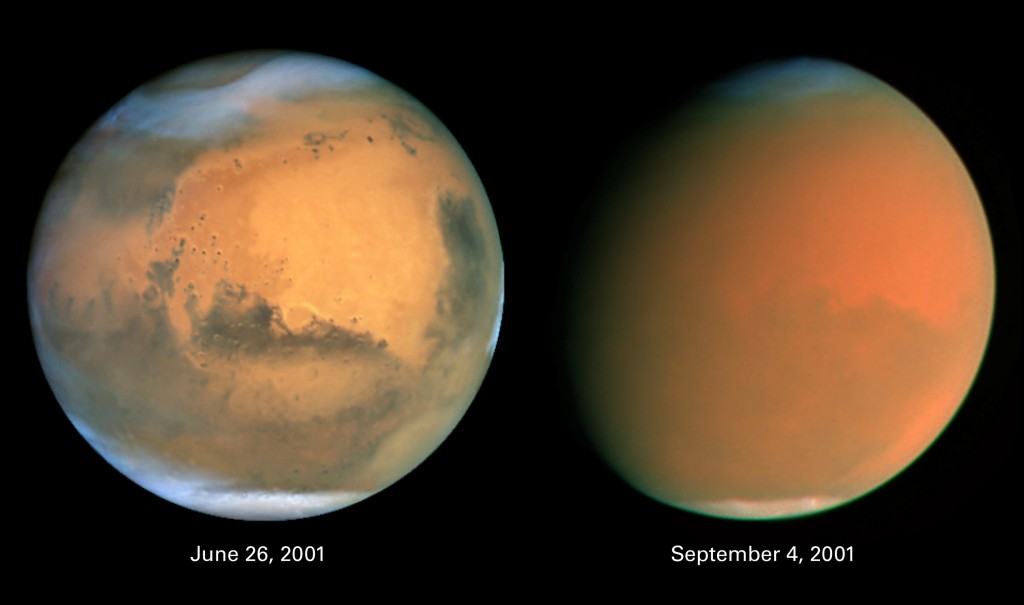 On the left, the seeds of a Martian storm are brewing in the giant Hellas Basin (oval at 4 o’clock position on disk) and in another storm at the northern polar cap. On the right, the storm after two months, which obscures all surface features. Both images are in natural color, taken with Hubble’s Wide Field Planetary Camera 2. See more information on Mars’ perfect storm on Hubblesite.org. Photo by NASA, James Bell of Cornell University, Michael Wolff of Space Science Institute and The Hubble Heritage Team 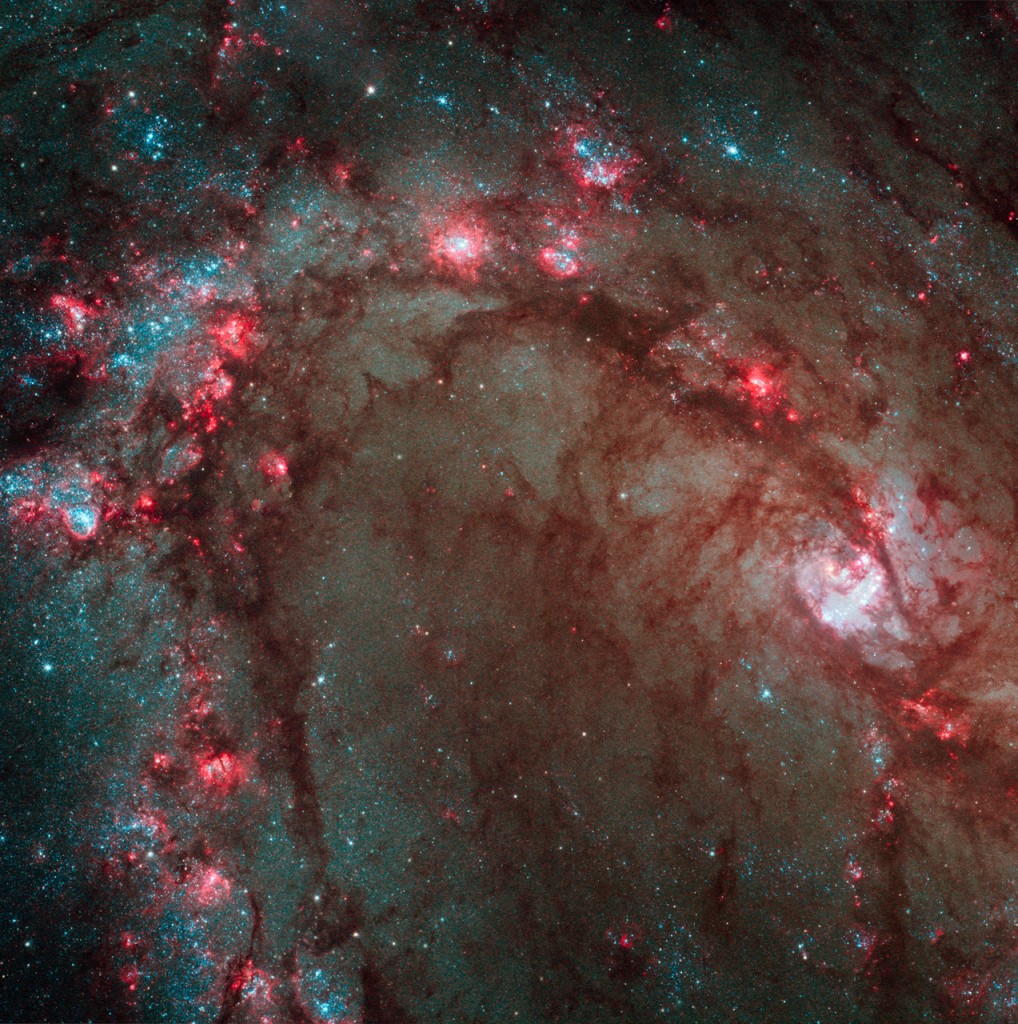 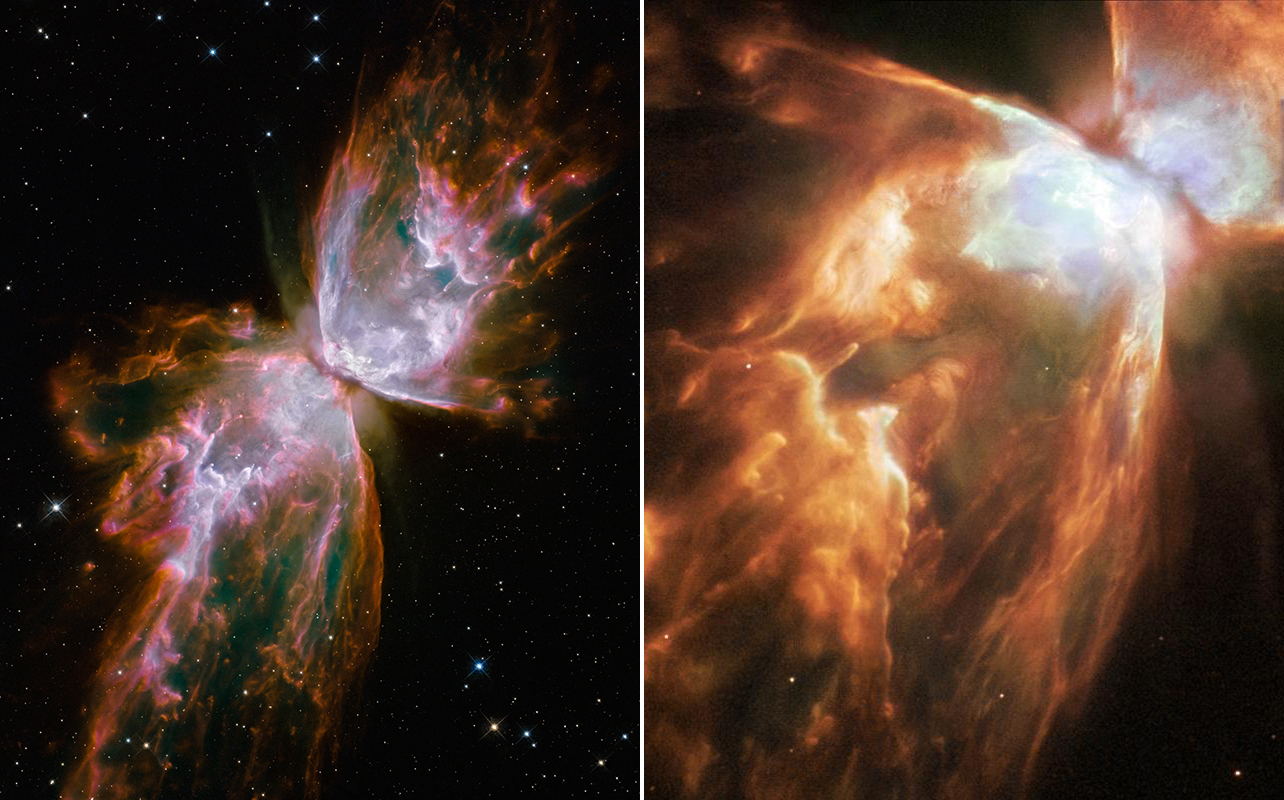 Gas released by a dying star races across space at more than 600,000 miles an hour, forming the delicate shape of a celestial butterfly. This nebula is also known as NGC 6302 or the Bug Nebula. Photo by NASA/ESA Hubble Space Telescope

At left, Saturn’s rings in ultraviolet light, from NASA and E. Karkoschka from the University of Arizona. At right, as Saturn takes its 29-year journey around the Sun, its tilt allows us to see its rings from different perspectives. Saturn’s tilt also gives it seasons. The lowest image on the left shows the northern hemisphere’s autumn, while the uppermost right image shows the winter. Photo by NASA and The Hubble Heritage Team 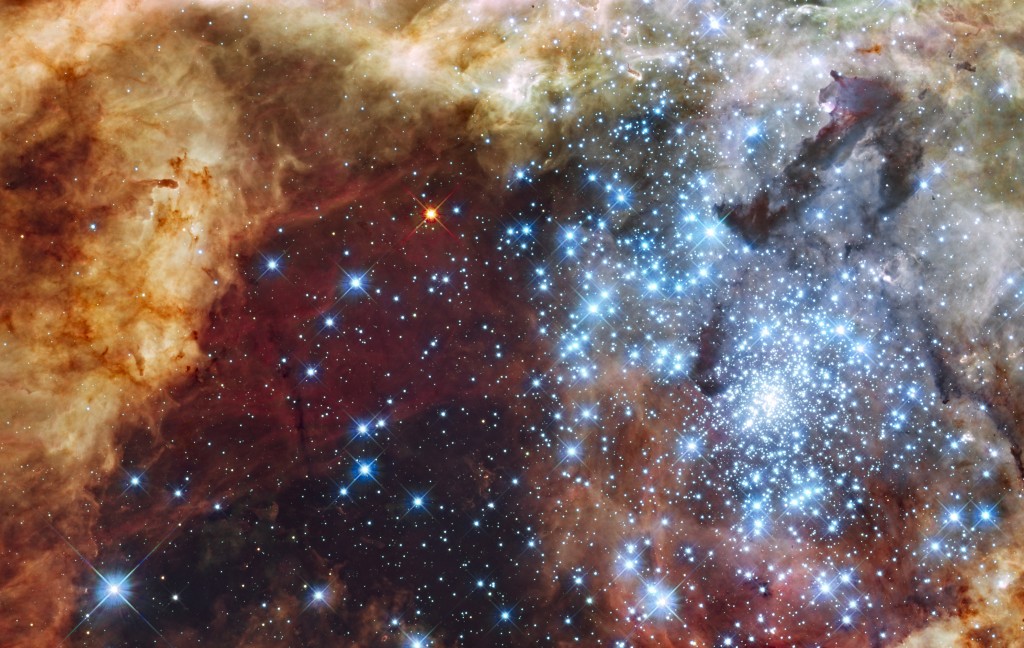 The massive, young stellar grouping, called R136, is only a few million years old. Many of the diamond-like icy blue stars are among the most massive stars known, several more than 100 times more massive than our Sun. These hefty stars are destined to pop off, like a string of firecrackers, as supernovae in a few million years. Photo by NASA, ESA, F. Paresce (INAF-IASF, Bologna, Italy), R. O’Connell (University of Virginia, Charlottesville), and the Wide Field Camera 3 Science Oversight Committee 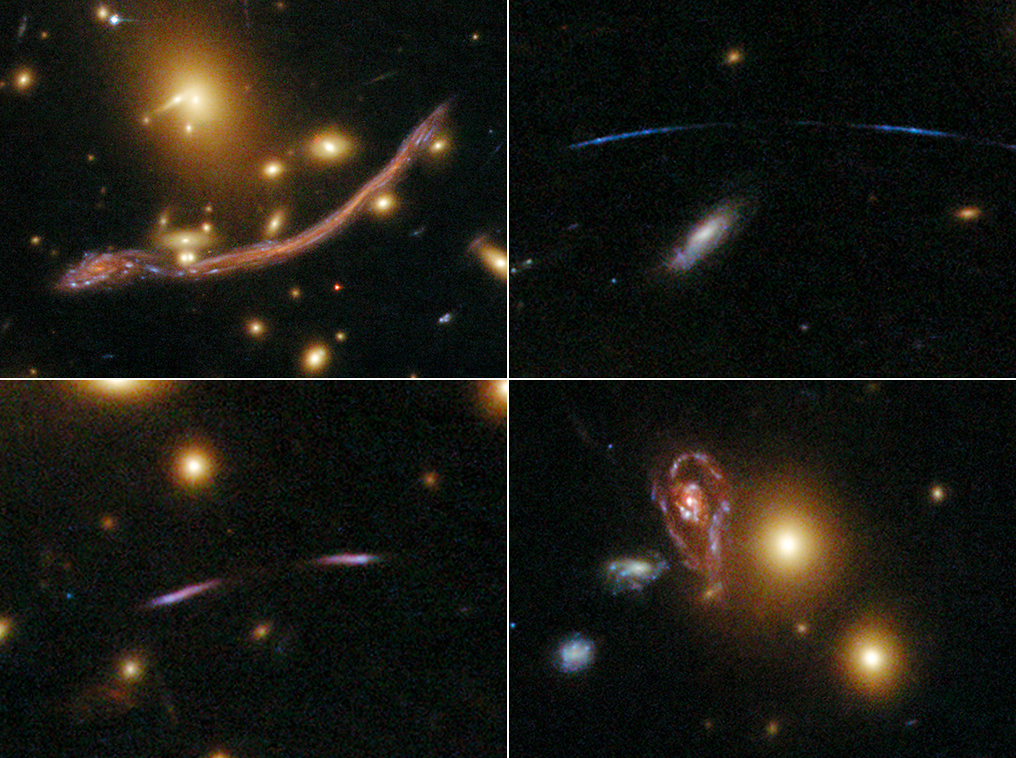 Abell 370 is one of the very first galaxy clusters where astronomers observed the phenomenon of gravitational lensing, where the warping of space by the cluster’s gravitational field distorts and magnifies the light from galaxies lying far behind it. This is manifested as arcs and streaks in the picture, which are the stretched images of background galaxies. Photo by NASA, ESA, the Hubble SM4 ERO Team and ST-ECF 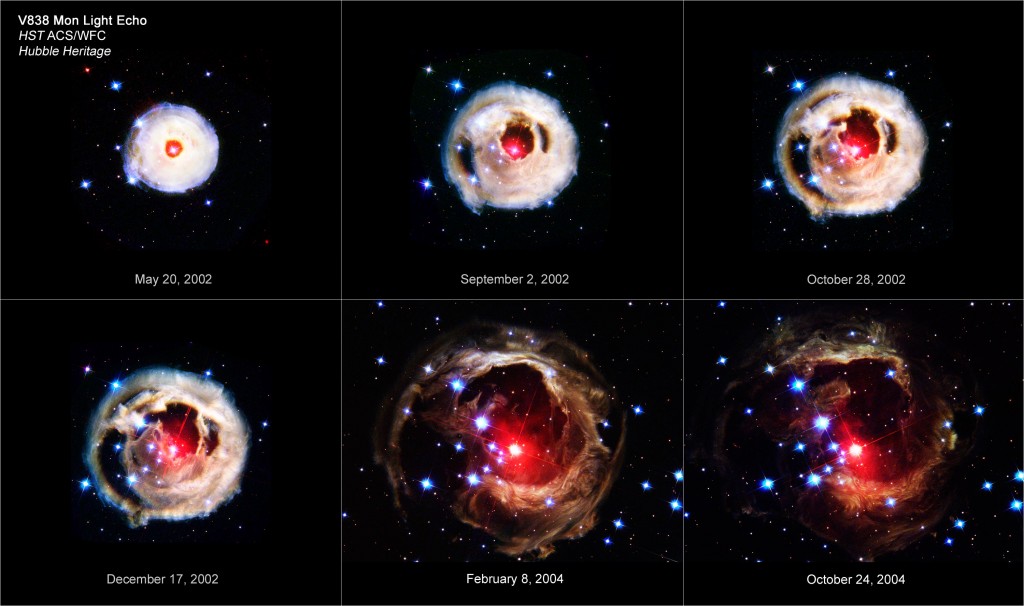 A pulse of light from a star’s outburst traveling through the surrounding space, illuminating material ejected by the star at a much earlier epoch. This is one of a series of “snapshots” of the ongoing phenomenon that took place over many months, and provided an unusual opportunity to follow a rapidly changing subject and the rare ability to tease out its full 3D structure. Photo by NASA, ESA, and Z. Levay 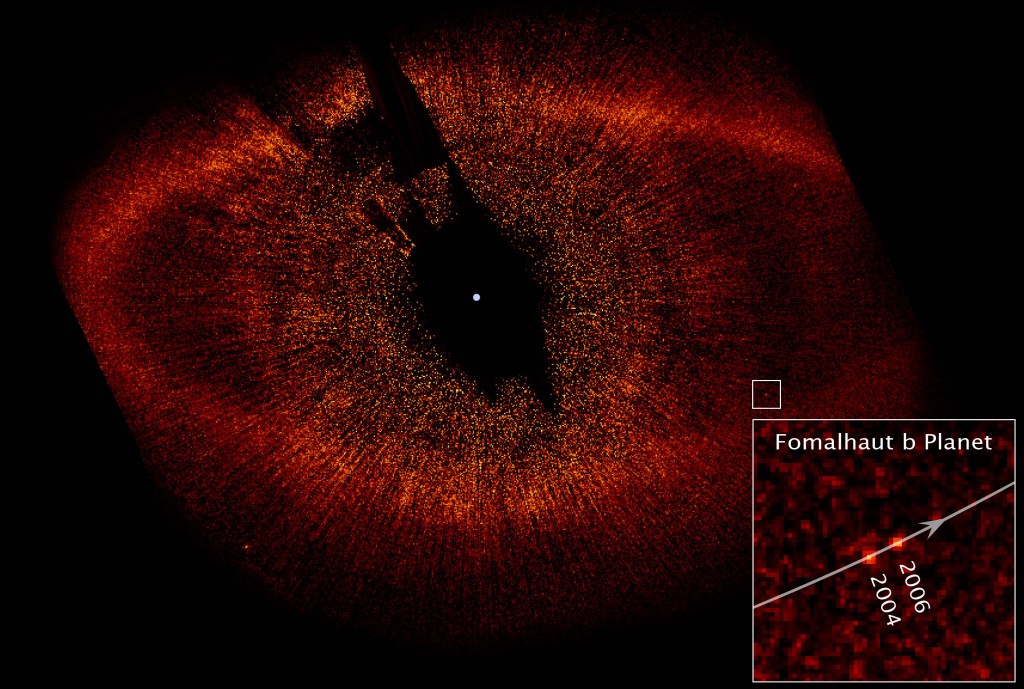 This is the first visible-light image ever taken of a planet around another star, Fomalhaut b, orbiting its parent star, Fomalhaut. The inset at bottom right is a composite image showing the planet’s position during Hubble observations taken in 2004 and 2006. Astronomers have calculated that Fomalhaut b completes an orbit around its parent star every 872 years. The region around Fomalhaut’s location is black because astronomers used the Advanced Camera’s coronagraph to block out the star’s bright glare so that the dim planet could be seen. See more information on Fomalhaut and Fomalhaut b on Hubblesite.org Photo by NASA, ESA, P. Kalas, J. Graham, E. Chiang, E. Kite (University of California, Berkeley), M. Clampin (NASA Goddard Space Flight Center), M. Fitzgerald (Lawrence Livermore National Laboratory), and K. Stapelfeldt and J. Krist (NASA Jet Propulsion Laboratory) 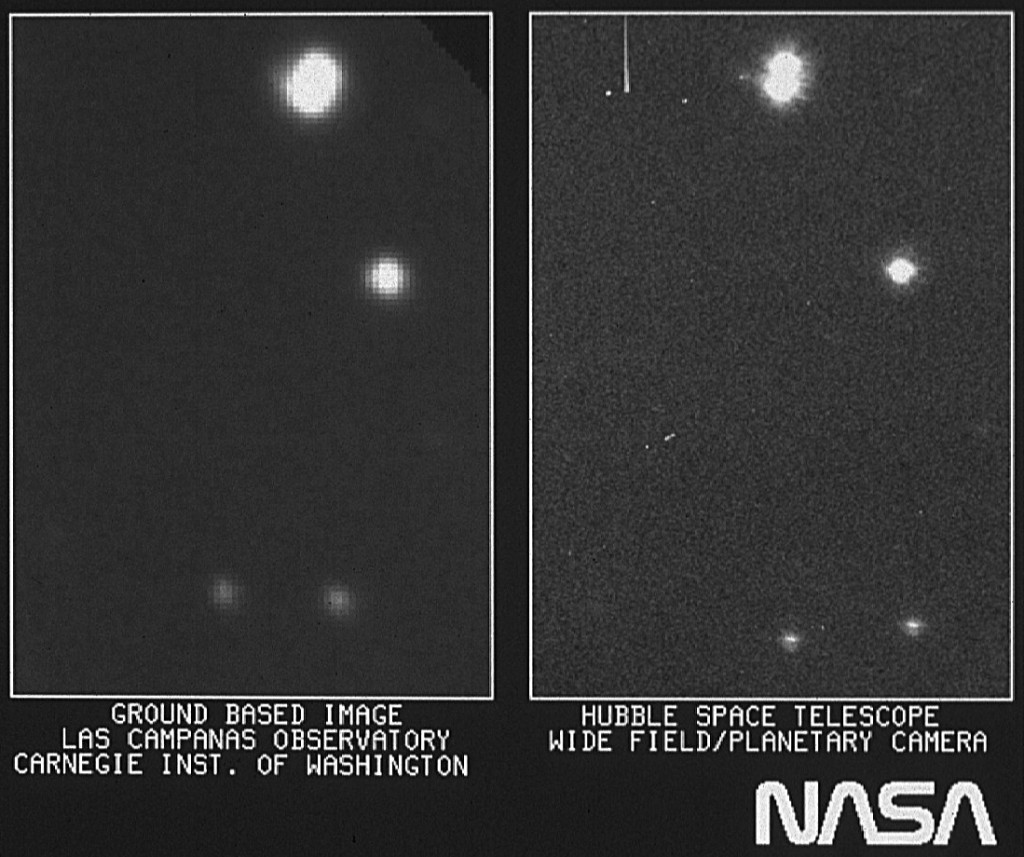 Where it all started: on May 20, 1990, NASA’s Hubble Space Telescope’s Wide Field/Planetary Camera takes its first image, right. As a comparison, it is shown next to a ground-based picture from Las Campanas, Chile, Observatory of the same region of the sky. The Las Campanas picture was taken with a 100-inch telescope. The first Hubble image was intended to assist in focusing the telescope. It was a 30-second exposure. Read more on Hubble’s first image at Hubblesite.org. Photo by NASA, ESA, and STScI

Photo captions are provided by NASA. You can see more photos on NASA’s Hubblesite.org.

Left: Hubble captured this mountain of dust and gas rising in the Carina Nebula. The top of a three-light-year tall pillar of cool hydrogen is being worn away by the radiation of nearby stars, while stars within the pillar unleash jets of gas that stream from the peaks. Photo by NASA, ESA, and M. Livio and the Hubble 20th Anniversary Team (STScI)