Scientists have discovered 3.7 billion-year-old fossils entrapped by Greenland’s ice, according to a study published on Wednesday in the journal Nature.

The newly discovered remains may represent the oldest known evidence of life on Earth and could guide the search for life on moons or others planets in our solar system, such as Mars.

The fossils are stromatolites — sedimentary structures produced by microorganisms — and a team of Australian scientists found them in a western Greenland region known as the Isua Greenstone Belt. This remote research site is accessible only by helicopter, but it houses a portal into the past in the form of relatively well-preserved rocks.

To the average person, the specimens might resemble hand-drawn waves scrawled into the brown stone. But the swirls represent areas where microorganisms shifted the sediments as they layered billions of years ago.

Life at that nascent stage would have seemed vastly different compared to modern Earth.

“Early Earth would have had small, black continents and an orange sky,” said Martin Van Kranendonk, an astrobiologist and study co-author from University of New South Wales, Australia. 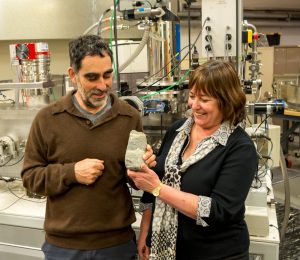 Geologist Allen Nutman of the University of Wollongong and geochemist Vickie Bennett of the Australian National University hold the 3.7-billion-year-old fossilized stromatolite that they found in Isua, Greenland. Photo by Yuri Amelin

The burnt tinge in the air would have been due to increased levels of carbon dioxide and volcanic gases. Without plants or fungi, the continents would have been covered by black crust made of basaltic lavas. The seas would have been green thanks to dissolved iron, Van Kranendonk added.

The study suggests the microorganisms likely lived in shallow water, and the discovery predates the oldest prior evidence of life by approximately 220 million years. It shows that life may have formed quicker and easier than once thought.

“Earth was bombarded by ocean-vapourising asteroids up until about 3.9 billion years ago,” Van Kranendonk said in an email. “It appears that life may be able to develop relatively quickly on an Earth-like planet, possibly in as little as 200 million years.”

This finding suggests that the conditions favorable for life don’t require a huge time period to become established.

“This opens the window a bit further for finding the right conditions elsewhere in the solar system,” Van Kranendonk said.

While exciting, this Greenland microbial tomb is not ironclad.

“The case for a biological origin of the Greenland structures is limited by the information available in the tiny outcrop,” wrote NASA astrobiologist Abigail Allwood in a Nature op-ed. “There are very few structures available to study, and although the overall shape of the Isua structures has survived, textural and chemical details within them have degraded substantially.”

The fossils also lack cellular features and organics, said Allwood, who found the previous oldest fossil in Australia in 2006. However, she wrote:

If these are really the figurative tombstones of our earliest ancestors, the implications are staggering. Earth’s surface 3.7 billion years ago was a tumultuous place, bombarded by asteroids and still in its formative stages. If life could find a foothold here, and leave such an imprint that vestiges exist even though only a minuscule sliver of metamorphic rock is all that remains from that time, then life is not a fussy, reluctant and unlikely thing. Give life half an opportunity and it’ll run with it.

Left: These stromatolites, wavelike patterns created by bacteria embedded in sediment, are 3.7 billion years old and may represent the oldest life on the planet. Photo by Allen Nutman